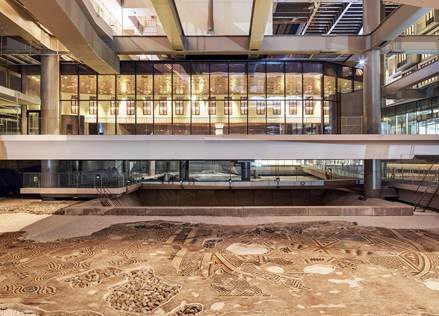 New York – EAA’s Museum Hotel Antakya in Antakya, Turkey has been shortlisted for this year’s World Architecture Festival Award in the’ Hotel and Leisure’ category for completed buildings.

The Museum Hotel Antakya was previously selected as winner of ‘Hotel and Leisure’ category for future buildings in 2014 at WAF.

WAF – World Architecture Festival will take place in December 4-6 in Amsterdam this year and the winners will be announced at the WAF gala dinner.

“The relationship of Archeology and Architecture is one that involves tension, all over the world. In this respect, this building will create a new discussion and clear ways for new possibilities. One important thing is that the archaeological preservation will continue even after the building will be completed. We think that this project will become an important example on historic preservation. There are not so many examples of archaeologically sensitive projects of this scale in the world.” said Emre Arolat.

The Museum Hotel Antakya is built on a site where very well-preserved archaeological remains dating back to 3rd century BC were discovered.

With EAA’s sensitive approach to the site context; all typological elements of the ‘Hotel’ have been raised off the ground and designed within a superstructure that only sits on points of the site devoid of archaeological findings. Rooms were prefabricated off site and transported and placed into the composite structure one by one. The Room modules were linked via bridges – the hotel corridors- where the visitors never loose eye contact with the amazing archaeological site.

As much as it is a hotel, this building is also a museum in traditional sense. The ground level is treated as a -museum in situ-, where a special patio, differentiated from the hotel circulation takes the visitors as close to the mosaics, Roman baths and piazzas as possible.

Located very close to Church of Saint Peter, carved into the mountain Starius, claimed to house the first Christian congregation, The Museum Hotel Antakya, introducing a twisted temporality, will be the perfect place to come face-to-face with antiquity, having a gaze over the ruins and mosaics but at the same time being experiencing all in a completely “new” building.

Founded by Emre Arolat, Hon. FAIA, RIBA and Gonca Pasolar in 2004, EAA-Emre Arolat Architecture focuses on a wide range of work including urban master plans, airports, residential and cultural buildings, and workplaces. EAA, with a long family tradition, has become one of the largest architectural offices in Turkey, and has expanded to offices in London and New York. Emre Arolat Architecture believes in fully exploring and researching the socio-political context of all projects and is committed to executing thoroughly researched work.

EAA’s projects have been displayed in many notable institutions, such as the Design Museum and Royal Academy of Arts in London, the Royal Institute of British Architecture, and at numerous International Architecture Biennales in Venice and Istanbul. The firm’s work has received international recognition, including selected work with the Mies van der Rohe Award, the Aga Khan Award, and the RIBA Award for International Excellence 2018. The firm’s work has been published in Emre Arolat Architects: Context and Plurality, a monograph published by Rizzoli and edited by Philip Jodidio and Suha Ozkan.