/ Energy / Despite Slowdown in Capacity Additions, China Will Continue to Lead Global Steam Turbine Market Between 2019 and 2023, says GlobalData

Despite Slowdown in Capacity Additions, China Will Continue to Lead Global Steam Turbine Market Between 2019 and 2023, says GlobalData 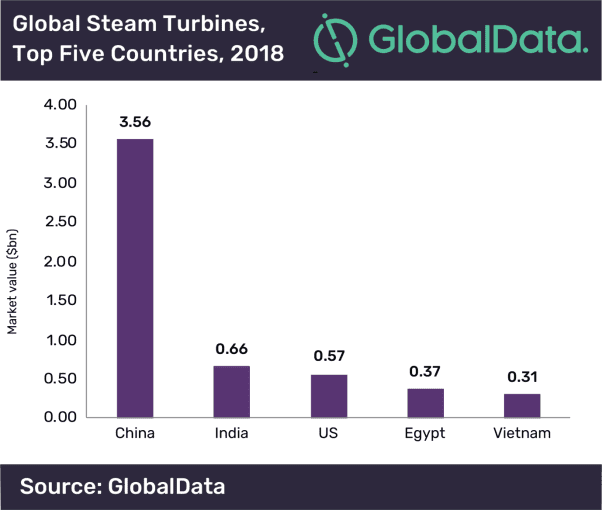 The global steam turbine market registered a market value of US$9.25bn in 2018, primarily driven by growth in China. Despite a slowdown in capacity additions, the country will continue to lead the global market, followed by India, the US, Egypt and Vietnam, between 2019 and 2023, according to GlobalData, a leading data and analytics company.

The company’s latest report, ‘Steam Turbines for Thermal Power, Update 2019 – Global Market Size, Average Price, Equipment Market Share and Key Country Analysis to 2023’, reveals that increasing demand for uninterrupted power in developing countries such as China and India, and the rise in combined-cycle and cogeneration operations are set to drive the aggregate value of the global steam turbine market to US$36.70bn between 2019 and 2023.

Bhavana Sri Pullagura, Power Analyst for GlobalData, comments: “Coal power generation is expected to gradually lose its prominence in power generation as countries across the world are aiming at cutting down dependence on coal and switching to renewable resources and natural gas for power generation to achieve climate targets and reduce carbon emissions. However, technological improvements and developments in thermal power such as carbon capture and storage, combined heat and power, and CCGT, and the discovery of shale gas will drive the thermal power market over the forecast period.”

China was the top country for steam turbines with a market value of US$3.56bn in 2018. However, due to a mandatory target to reduce the coal-fired capacity, the country is set to witness a decline in market value to US$1.53bn by 2023.

Bhavana Sri concludes: “Challenges such as increased focus on renewable energy sources and natural gas to move away from coal for cleaner energy, environmental regulations, land acquisition problems, non-availability of domestic coal in some countries and energy supply security issues continue to hinder the growth potential of the global steam turbines market.

“Governments’ plans to add coal-fired capacity and the use of advanced technologies such as ultra-supercritical, supercritical and other clean coal technologies for existing and upcoming coal power plants are the major factors that will determine the future of installations globally.”