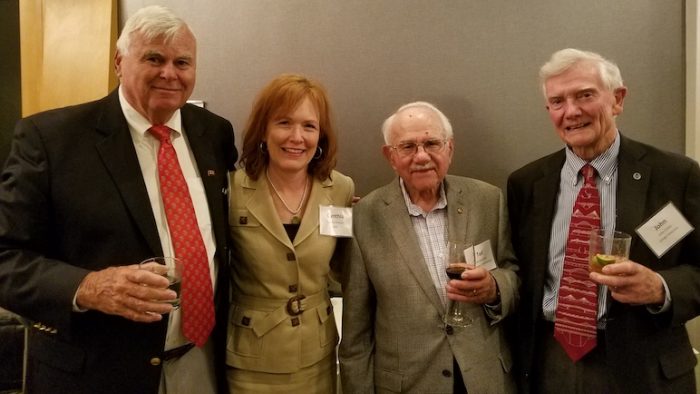 CHICAGO – The American Institute of Steel Construction recently recognized Theodore (Ted) V. Galambos for his outstanding service to the organization on the occasion of his 90th birthday.

“You have literally helped to build so many of us up from our start, and all of this you’ve done just by being who you are—to the great benefit of the industry and the profession,” AISC President Charles J. Carter, SE, PE, PhD, told Galambos at a celebration June 12 in Chicago. “We celebrate your technical excellence, we celebrate your lifelong commitment and integrity, we celebrate how meaningful it is for all of us who have had the pleasure to work with you and know you.”

Some call Galambos “the father of load and resistance factor design” (LRFD) after his pioneering research led to the introduction of LRFD in the 1986 AISC Specification. His numerous professional honors include the 1964 ASCE Walter L. Huber Research Prize, the 1981 AISC T.R. Higgins Lectureship Award, and the 1999 AISC Geerhard Haaijer Award for Excellence in Education.

Galambos, a Hungarian immigrant, earned a BS and MS in Civil Engineering from the University of North Dakota, supplementing his studies with other engineering experiences; as a surveyor in the Army Corps of Engineers, he earned the Distinguished Service Medal. He completed his PhD in Civil Engineering at Lehigh University in 1959 and taught and conducted research there for much of the late 1950s and early 1960s, focusing on the stability behavior and plastic design of steel beam-columns and multistory steel frames. He moved to Washington University in St. Louis in 1965, where he researched structural reliability, shakedown of steel structures, the behavior and design of composite joists, and, of course, LRFD of structures. Galambos left St. Louis for the University of Minnesota in 1981 and retired in 1997—though not from industry service.

“I don’t know how many thousands of students Ted has taught,” said Roberto Leon, a member of the AISC Committee on Specifications. “All of them, I think, carry with them a remembrance of a teacher that cared about their work.”

In addition to the AISC Committee on Specifications and Task Committees, Galambos has served on the executive committee of the Structural Stability Research Council and on committees for several other industry groups.

The American Institute of Steel Construction, headquartered in Chicago, is a non-partisan, not-for-profit technical institute and trade association established in 1921 to serve the structural steel design community and construction industry. AISC’s mission is to make structural steel the material of choice by being the leader in structural steel-related technical and market-building activities, including: specification and code development, research, education, technical assistance, quality certification, standardization, market development, and advocacy. AISC has a long tradition of service to the steel construction industry of providing timely and reliable information.