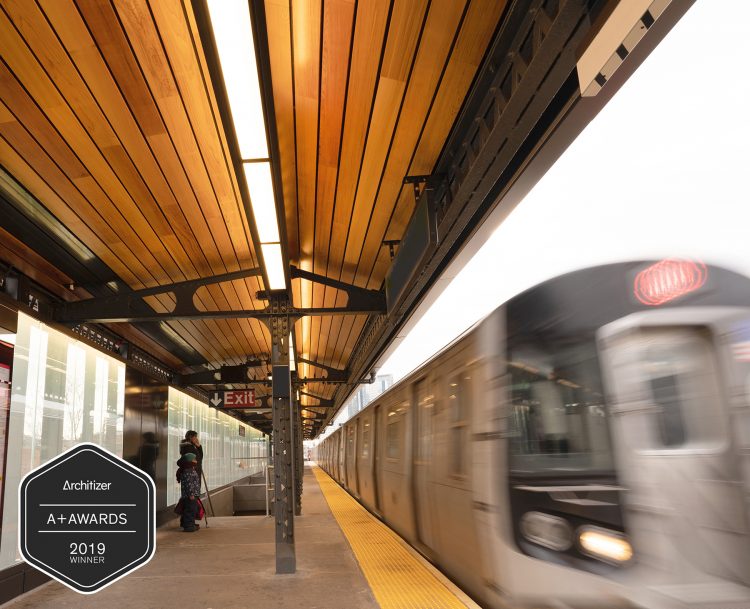 NEW YORK – ASI Architectural was recently presented with the prestigious Architizer A+ Award for the company’s contribution to New York City’s 2018 subway system upgrade. ASI won the popular vote in the ‘Finished-Ceilings’ product category for its work on the project. Aiming to promote and celebrate the best architecture and products of the year, the A+ Award is given to companies whose products incorporate cutting-edge materials and new-to-market innovations, representing the definitive list of global architectural products.

New York’s Metropolitan Transit Authority (MTA), which oversees all transportation throughout metro-New York, called for new subway cars and updated infrastructure as well as renovations to stations. Among the MTA’s highest priorities was finding a way to combat the harsh sound environments of the stations and neighboring Long Island Railroad (LIRR) platforms. Characterized by railway clatter, heavy vibration and high-volume passenger contact, as well as being among the most heavily traveled public transit systems in the world, the MTA needed a company with the wherewithal to get the job done. ASI Architectural’s Linear wood ceiling system combines stylistic design with the durability necessary for this seemingly impossible project.

“We are honored to receive the prestigious Architizer A+ Award,” says Jon Mestad, brand manager, ASI Architectural. “The NYC transit upgrade offered us an immense opportunity to demonstrate our expertise and it’s wonderful to see that Architizer’s judges, and the general public, are impressed with our team’s work. We are certain that this recognition will help to further grow our presence throughout North America.”

The NYC subway upgrade provided ASI Architectural the perfect opportunity to showcase its strengths in these areas. A major feature of the project relied on ASI’s ability to provide stylish yet sophisticated solutions in the form of tough, beautiful, and sound-absorbing ceilings. The upgrade plan called for renovations to be made to train and subway stations, which allowed ASI to implement new wood-plank ceilings. Because the stations are exposed to weather, the solid Western Red Cedar planks used were specified with a clear fire-retardant finish.

The project also stipulated that the black felt filler strips normally used in the reveal spaces between linear wood planks be replaced due to some lower ceiling heights, as abuse from raised umbrella tips poking through the felt was a concern. ASI designed a unique perforated metal filler strip with a black powder-coated finish — the perforations allowed the filler strips to remain acoustically transparent like the felt strips they replaced, so the acoustical backer would absorb some of the noise but with substantially more durability. The innovative plank system design overcame the harsh conditions of these New York City transit stations while providing a beautiful, long-lasting and noise-mitigating ceiling surface.

Now in its seventh year, the Architizer A+ Award recognizes firms and individuals involved in architecture, design, planning and construction for global leadership in the industry. Contestants are chosen by Architzer’s jury panel, which consists of industry luminaries as well as influential figures from beyond the realms of architecture and design. Winners are chosen for excellence in various aspects of their work, including form, function and innovation. Following a nomination by five of Architizer’s reputable judges, nominees are then presented online to a group of over 400,000 design practitioners and enthusiasts from around the globe, who vote on the projects.

ASI Architectural, a brand of Anderson Specialty Industries, features innovative acoustical wall and ceiling products for the architectural and design industry. The company offers products that can contribute to LEED credits and are available using FSC materials with no added urea formaldehyde. The staff has more than 30 years’ experience in acoustics and includes experts in wall and ceiling systems, project management and custom applications. For more information, visit: www.asiarchitectural.com.