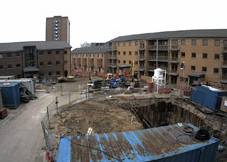 NW Systems Group, the security solutions provider, has installed a high definition surveillance camera powered by solar and wind energy to help monitor the construction of the new Mearns Academy Community Campus in Aberdeenshire, Scotland. Construction at the site, led by Lend Lease, began in August 2012 and will be completed in June 2014.

Mearns Academy’s existing site nearby is not large enough to adequately accommodate the number of pupils it now has on its roll. The new academy site will offer an initial capacity of 640 and is designed to be expanded to take up to 840 pupils in the future.

Iain Cochrane, Project Manager, Project Management & Construction, Lend Lease, said, “We were keen to explore the potential of running the most environmentally-friendly building site possible at Mearns Academy. To this end, we expressed our concerns to NW Systems about the prospect of running a dedicated diesel generator in order to power a single surveillance camera in a remote part of the site, to oversee our operations during construction.

“NW Systems’ solution was to ‘go green’ so that the camera is fully powered by two compact solar panels and a 3-phase generator wind turbine system. This solution is already proving to be much more cost effective than diesel generator or hard-wired alternatives.”

Frank Crouwel, managing director, NW Systems explained, “We looked at the potential of running surveillance cameras on construction sites via solar and wind power about five years ago but the solar panels and battery kits were too expensive then.

“However the cost of solar, wind turbine and battery technologies has since halved and efficiency has increased significantly. It has become possible to deliver a green-powered solution for our RemoteManager service very cost effectively today.

“For a very reasonable price the customer now gets a combined solar panel and wind turbine system connected to a high specification battery for powering a single high quality surveillance camera capable of monitoring a fairly large construction site from a high pole. With RemoteManager customers will also get local and remote storage of surveillance images which can be viewed via a secure portal from any location over the internet.”

NW Systems deployed a Mobotix M24M high resolution 3 Mega Pixel outdoor network camera fitted with a wide angle 90 degree lens at the Mearns Academy Campus. Mobotix was chosen in this installation because of its ability to operate with less power than many comparable high specification cameras. The camera was fitted onto a 12-metre high CCTV pole, overlooking the whole site and capturing high resolution images and live video.

It was networked using a secure high speed 3G cellular broadband connection to the internet. The camera also has local storage capacity on an in-built MicroSD card providing redundancy for rare occasions where connectivity is lost.

NW Systems’ RemoteManager service, deployed at this site, provides a high resolution time lapse video based on images recorded over the course of each phase of the construction project.

Remote Manager is a unique, yet tailorable high resolution video monitoring service offering system design, installation, and wireless or wired connectivity and full hosting of live video and captured images 24/7/365 for the entire length of any construction or refurbishment project.

More information and details can be found on the RemoteManager section of NW Systems’ website at http://www.nwsystemsgroup.com/what-we-do/remotemanager-division.php

About NW Systems Group
NW Systems Group is an IP Video and security solutions provider. The group has five principal offerings. NW Security is a leading integrator of video security systems within IT environments offering expertise in both CCTV and IT environments. Remote Manager is a web-based camera system designed specifically for construction and development projects. SecurityStation is a hosted video offering and Streamdays is a live streaming webcam hosting service designed for the tourism, leisure and hospitality sectors. Network Webcams is the group’s highly successful supply only division, offering a wide range of IP cameras, video management software and accessories. Network Webcams has grown in to the leading supplier of IP video products across the UK. This year it is devoting increased resources into expansion across Europe.