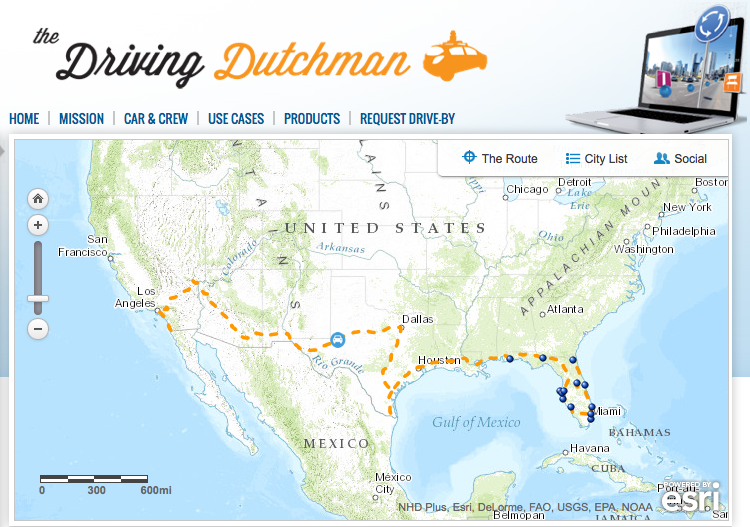 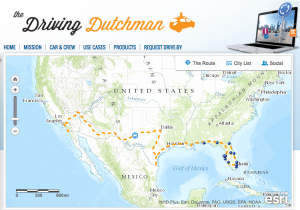 CycloMedia BV announced today the launch of its Driving Dutchman Tour, which features one of their Dutch employees traversing the most populated areas of the Southern United States to acquire large-scale 360-degree panoramic (Cycloramas) to help professionals save time and money while documenting this journey on social networks.

While the main purpose of the tour is to build sample datasets for prospective clients, the cross-country adventures of the driver will be chronicled via a blog – www.thedrivingdutchman.com – as well as Facebook, Twitter, LinkedIn, and Instagram and will share the trials and tribulations along the way. The blog features driver Roger Seetsen a nine-year CycloMedia veteran who has done driving campaigns all over the world. This will be his first trip to the United States. The tour began on May 1, 2013 in Jacksonville, Florida and will continue through the end of the year. Some destinations along the way include Miami, New Orleans, Austin, and Las Vegas, Los Angles, and San Diego.  Roger is traveling in a brand new 2014 Jeep Compass rigged with the CycloMedia camera system and plans to cover at least 5,000 (8,000km) linear miles of roads.

Because professionals need clear, accurate ground-level pictures taken on a regular basis, CycloMedia offers 360-degree Cycloramas from public roads and waterways (Aquaramas) that capture roadside features with up to four-inch (10cm) positional accuracy. The company’s GlobeSpotter viewing software uses these exact locations and high fidelity images to geo-tag objects (e.g. street furniture) and to visualize existing geo-information as precision overlays within Cycloramas (e.g. underground cables or above ground overpasses). This user friendly software plugs into customers’ existing Geographic Information Systems (GIS) and mapping software applications, and enables professionals who need information about assets along the street, such as those working in transportation, public safety, utilities, property and construction to save time and make better decisions.

CycloMedia’s professional solutions help customers save time, by allowing their staff to see the actual situation immediately on the Cyclorama, minimizing the need for frequent field visits. It also helps users improve communications (internally and externally) by offering immediate online access to more information about specific features and places, enabling everyone to see the same situation and thus prevent misunderstandings. Typical customers include government agencies at the city and county level, public works and transportation departments, tax assessors’ offices, utilities and cable companies, police and fire departments, and construction companies, who use the product for viewing, geo-tag comments, measuring, and create reports with Cycloramas.

Based on the company’s successful track record in The Netherlands, Belgium, Germany and Scandinavia, CycloMedia is now focused on expansion into the United States. The company is experiencing rapid growth due to a high demand for its user-friendly solutions. CycloMedia is unique in covering the complete customer value chain by offering technology, data, applications and consultancy to add value and lower costs for public and private organizations.