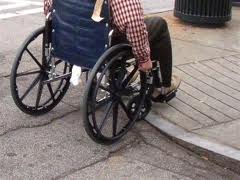 DLZ Corporation of Columbus, Ohio, has deployed an automated method of mapping sidewalk and curb ramp accessibility as mandated by the Americans with Disabilities Act (ADA). The digital mapping technique utilizes a GPS-enabled Apple iPad 2 tablet and the GeoJot+ mobile data collection system from GeoSpatial Experts of Thornton, Colo.

An engineering, architecture and surveying firm with offices throughout the Midwest, DLZ deployed the GeoJot+ mapping system in Mishawaka, Indiana, in 2012. DLZ employed four college interns to perform most of the field data collection, documenting ADA compliance on 240 miles of sidewalk and 1300 intersections in just eight weeks.

“The iPad method was faster and more accurate than traditional pen-and-paper data collection,” said Qasim Asghar, DLZ Project Manager in the South Bend, Ind., office. He added that training the interns to be productive with the system took just a couple hours.

The U.S. Justice Department released revised ADA standards in 2010 requiring local government agencies to evaluate the accessibility of their transportation infrastructure and adopt compliance transition plans. Included are intersection pedestrian curb ramps and sidewalks, which must meet guidelines to accommodate people in wheel chairs or with disabilities that hinder mobility.

“Introduction of a built-in GPS and compass in the 3G model of the iPad 2 turned the Apple tablet into a legitimate field mapping device,” said Rick Bobbitt, President of GeoSpatial Experts.

In the Mishawaka project, the four DLZ interns split into two teams. The sidewalk mapping team traveled together but worked separately, each with an iPad. Typically walking down either side of a street, the students kept their heads down looking for large cracks, potholes, uplifted concrete slabs and other damage that might impede a wheel chair or trip a physically challenged pedestrian.

Damage was identified by type and appropriate measurements were taken – such as the height of a heaved slab. A GPS photo was taken from at least one angle using the built-in camera. The iPad 2 model with 3G connectivity automatically geotagged each photo with latitude/longitude coordinates. GeoJot+ was able to increase the accuracy of those coordinates by up to four times.  The attribute data and measurements were entered into specific data fields on the iPad touchscreen using a custom menu created in GeoJot+.

The two-person DLZ curb ramp crew carried one iPad and worked together. At every ramp, the iPad digital camera was used to take a geotagged photo. One intern then used a smart level to get the required measurements while the other entered the results into the onscreen menu.

“On average it took the crews about five to 15 minutes to collect the required data at each ramp,” said DLZ’s Asghar.

This was half the time previously spent mapping assets with pen and paper, and the results were more accurate, according to Asghar. Crews made fewer data entry errors when using a point-and-click menu in GeoJot+. In addition, mistakes in transcribing field notes were eliminated because the data was collected digitally. Most importantly, there was no confusion in correlating hand-written GPS points with attributes because the GeoJot+ app automatically linked coordinates with photos and data entries.

Once the Mishawaka data was collected in the field, it was transmitted wirelessly to a desktop computer running the GeoJot+ Core photo-mapping software in the engineering firm’s South Bend office. The software correlated the features and attributes for output in a variety of formats including Esri shapefiles, Geodatabases, Google Earth files, PDF reports and .csv files.

Mishawaka Engineering Department personnel reviewed the photos and rated the sidewalk and curb damage by its severity. This ranking was added as an attribute to the file. The GeoJot+ sidewalk and curb ramp data will be output as an ArcGIS shapefile for direct input into the Mishawaka GIS for use in creating the official ADA Self-Evaluation and Transition Plan.

GeoSpatial Experts, Inc., founded in 2001 is the world-wide leader in geotagging and photo mapping software for business. To learn more visit www.geospatialexperts.com. Be sure to visit GeoSpatial Experts in booth 1218 at the Esri International User Conference being held July 8-12, 2013, in San Diego, California.