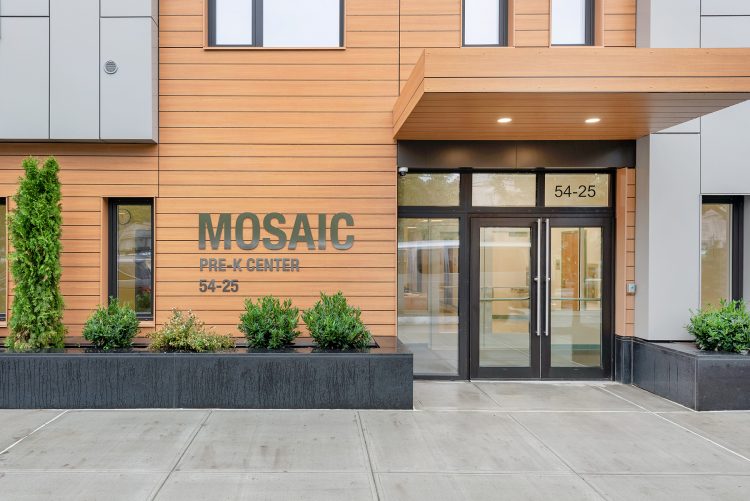 The 4,700-square foot school uses only one-eighth the amount of energy of a typical pre-K

According to Craig Tooman, AIA, LEED-AP, the CTA principal in charge of the Pre-K project, “The 4,700-square foot, three-classroom facility on the ground floor of the Senior Residence uses only one-eighth the amount of energy a typical pre-K of a similar size would use. It houses a general office, a staff room, a parents/community room, an infirmary, a custodial space, a lobby, and a warming pantry that is equipped with a small kitchen area with a milk chest, a warming cabinet, and a connected food-storage room.” There is also a 1,200-square foot play yard that is only accessible by going through the pre-K.

UPK Q368 marks CTA’s ninth universal pre-K design for the SCA thus far. The SCA has been building universal pre-Kindergartens throughout the five boroughs. CTA’s universal pre-K work has varied from one-classroom schools to those with up to 25 classrooms. 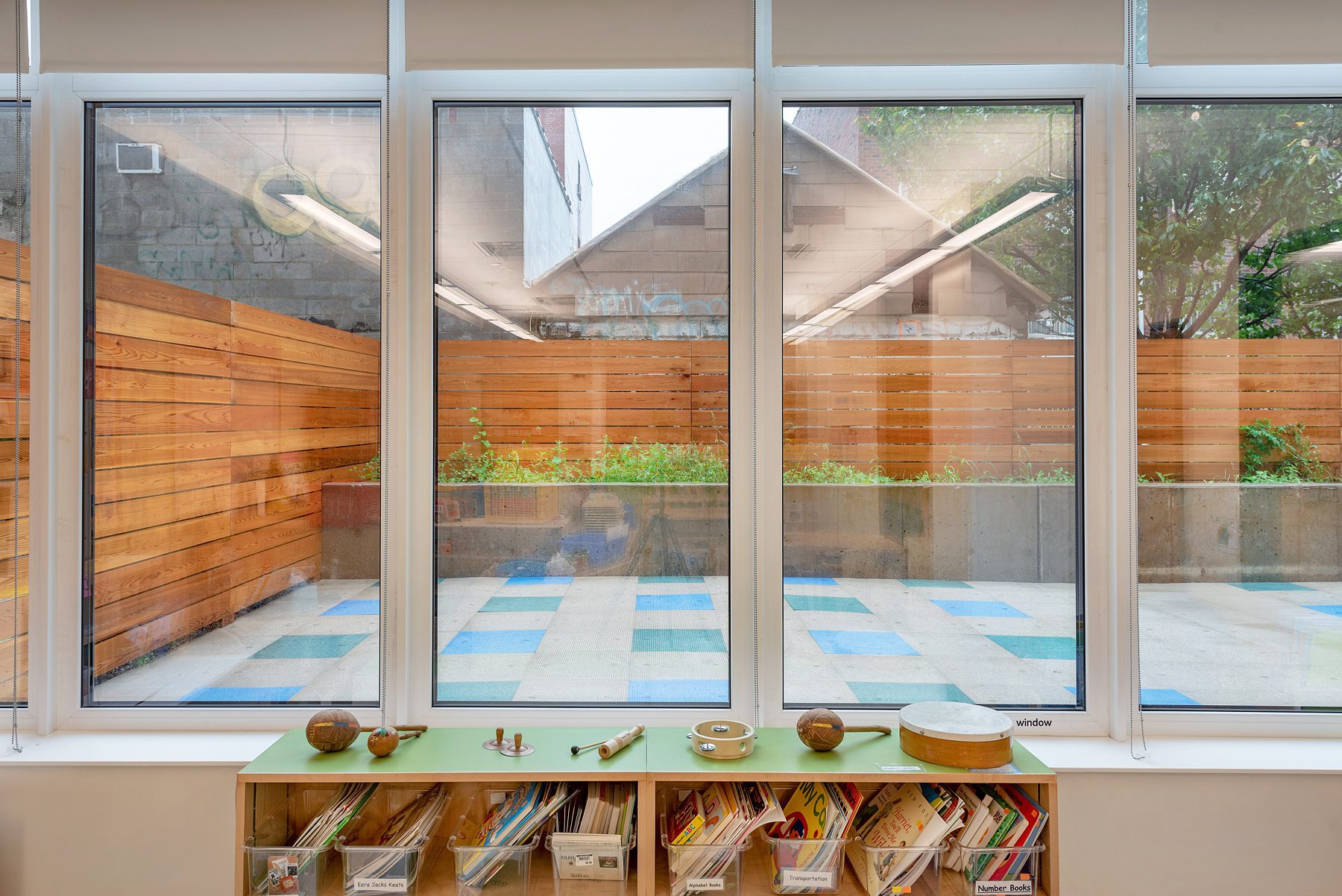 The private, 1,200-square foot children’s play yard is only accessible through the pre-K.
Photo by Pericle Gheorghias, CTA Architects

New York City’s Pre-K for All program promises to offer every four-year-old New Yorkers a high-quality, free, full-day pre-Kindergarten seat. This program provides one full year of education to children prior to beginning kindergarten, in order to give young students “an important foundation for success in school, home, and life.” Studies have shown that early childhood education lays a foundation that improves performance throughout a child’s educational experience. Universal pre-K teaches youngsters to play together, share, take turns, and channel their thoughts into words as they develop physical coordination, learn letters, numbers, shapes, and colors, and learn to ask questions.

The passive house building that houses UPK Q368 is the HANAC Corona Senior Residence, developed by HANAC, Inc. – the Hellenic American Neighborhood Action Committee. The HANAC Corona Senior Residence is expected to achieve Passive House Certification this summer, which will confirm it complies with environmentally forward Passive House Design standards. Passive House Design requirements include 75% energy savings in comparison to typical properties as well as significant environmental benefits for the physical health, comfort, and overall well-being of those who reside in, work in, learn in, and/or visit this facility.

HANAC, created in 1972, provides an array of services, including the development of affordable housing and the provision social services for New York City’s most vulnerable populations. HANAC has developed and manages a portfolio of over 600 affordable housing units with onsite social services for their tenants. The HANAC Corona Senior Residence is an eight-story, 68-unit, 58,000-square foot affordable housing apartment building for very low-income seniors. It is the very first affordable senior housing development in the country that meets the design standards of the Passive House Institute. Of the 68 units, there is one two-bedroom unit, 61 one-bedroom units, and six studio apartments. 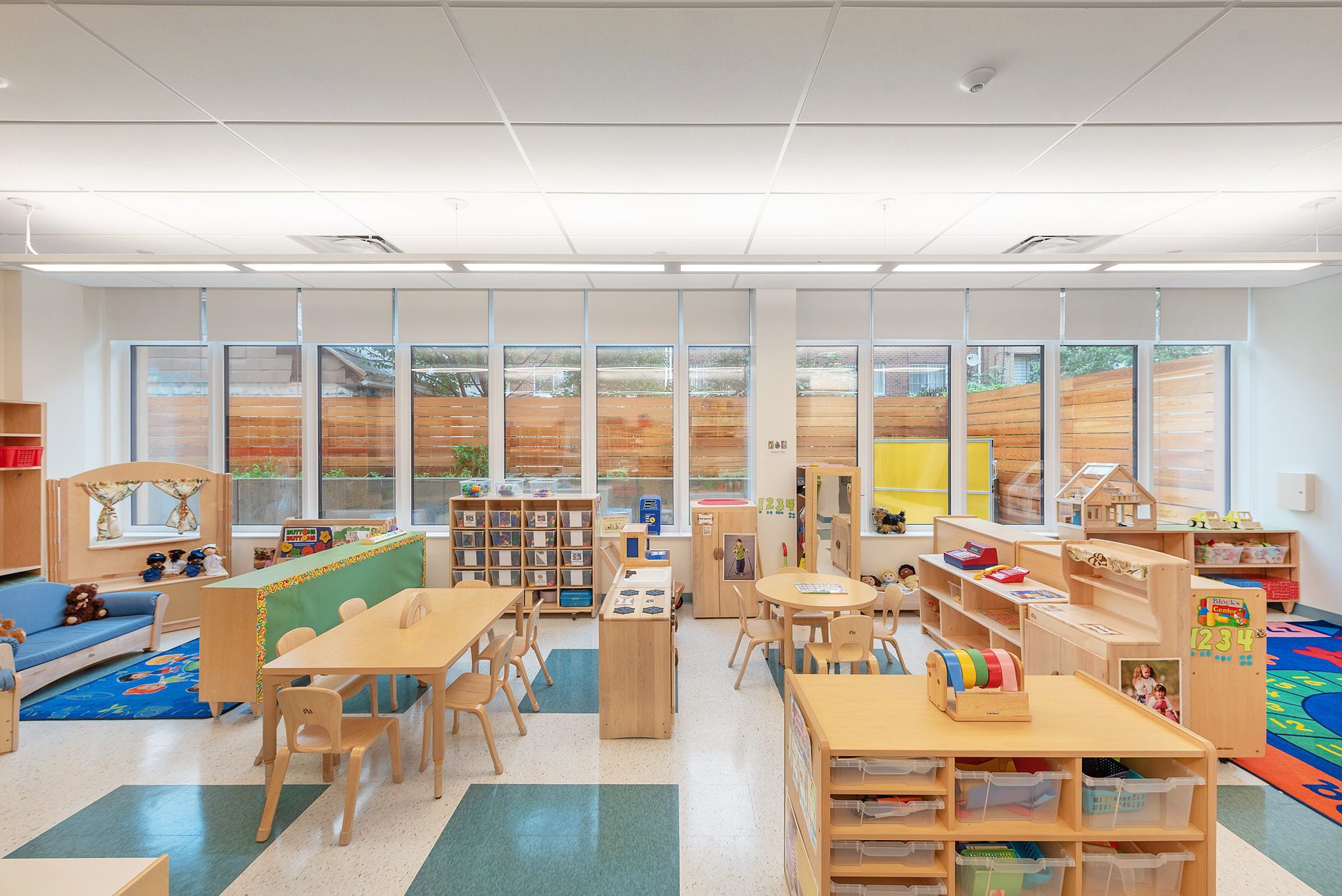 Each classroom has its own distinct color “language.” Three of the gypsum walls in all three of the classrooms are painted a very pale yellow color, with the fourth accent wall painted in a vibrant hue to match that classroom’s theme. Similarly, all of the classrooms’ vinyl floor tiles are in a checkerboard pattern, with the predominant field a speckled white with the accent tiles mirroring that classroom’s chosen color theme.
Photo by Pericle Gheorghias, CTA Architects

A “passive house” building is a structure built on the principles of the Passive House Institute (PHI), an independent research organization founded in Germany that is dedicated to the researching and development of construction concepts, building components, planning tools, and quality assurance for extraordinarily energy-efficient buildings that are comfortable, affordable, and ecological – all at the same time. Passive house buildings are constructed in such a way that their heating- and cooling-related energy use saves up to 75% over typical new builds (and saves up to 90% over traditional building stock). They do this, in part, by making the most of energy sources inside the building – residents’ body heat or solar heat entering the building, for example, while a high-efficiency heat-recovery unit reuses the heat contained in the exhaust air. Similarly, extremely well-constructed and -insulated windows, exterior walls, roof, and floor slab keep heat in during winters and out during summers. The ventilation systems used in passive house buildings are designed to supply continuous fresh air without creating uncomfortable drafts.

According to Tooman, conforming to the passive house building’s reduced energy-consumption requirements was the team’s biggest challenge. “These types of ultra-energy efficient designs are becoming much more popular, both city-wide and worldwide. Passive house requirements go well beyond those of LEED-certified buildings – the energy consumption is much, much lower,” he noted. The CTA team worked within a “super-insulated” building envelope to reduce energy consumption within the space.

Further, the pre-K space is connected to the base building’s energy-recovery system. CTA worked with its Passive House consultant, YR&G New York (now WSP USA Inc.)– and the Association for Energy Affordability (AEA), the Passive House consultant for the base building – to incorporate the same systems and energy-efficient approach that the base building had. A variable-refrigerant flow (VRF) condenser was installed on the roof of the HANAC building for the pre-K space, for example. “In this way, the mechanical systems keep the energy found inside the envelope recirculating fresh air. This not only lowers the energy load, it maintains a much cleaner, healthier environment,” Tooman added. The pre-K has a separate entrance from the senior center and uses the same triple-glazed storefront system.

Tooman also stated that CTA was able to determine that this particular pre-Kindergarten could operate with much lower energy consumption than a typical one, which include computer systems, demanding lighting systems, high plug loads, and extensive cooking facilities. Using all of these high-energy elements, the project would not have made the passive house requirements that limit the amount of energy used per square foot. Tooman emphasizes that this is the reason there are so few passive house schools – the energy load in a school is typically much higher than the energy load in a residence.

At the very beginning of the project, during the summer of 2017, CTA thought that perhaps the pre-Kindergarten would be able to use some of the energy the HANAC Corona Senior Residence did not, but the team ascertained quickly that the base building would have no energy to “spare,” so to speak. While the energy loads of housing complexes are often quite a bit less that than those of schools, this particular senior complex would be consuming the same amount of energy as the students in the pre-K on a per-square-foot basis. After all, the seniors would be home more often than younger, working populations, so their energy loads would be higher than those of typical residents’.

Thus, there was no latitude in terms of energy use. In the process of collaborating with the SCA team to reduce this pre-Kindergarten’s energy loads, CTA gathered evidence that the students and staff of this size preschool could use less than SCA’s standards. To this end, CTA ran energy-consumption tests on a nearby pre-Kindergarten in LeFrak City that was similar in size to the proposed Mosaic Pre-K Center at 54-25 101st Street. CTA personnel were intimately familiar with this comparable pre-K – CTA had served as its designer a year earlier.

According to project manager Alanna Jaworski, “Through our tests, we were able to show that our calculations were accurate, that this new facility wouldn’t need SCA’s usual power minimums. We established that we could significantly reduce the plug load and overall electricity consumption in the pre-K and meet Passive House Design standards.” In fact, the team was able to remove nearly half of all of the outlets, without negatively impacting the students’ needs. Nearly all of the quad outlets were changed to duplex outlets.

Similarly, Ryan Esparza, the project architect on the pre-Kindergarten, noted that CTA downscaled the proposed data system to a less complex computer network that will still be more than adequate for the pre-K’s needs. “Public pre-Kindergartens typically require a main distribution frame (MDF) room for telecommunications. The room is supposed to be of a certain size and with similar equipment for schools of varying sizes. We looked at the neighboring, comparable school and showed that a small, three-classroom school didn’t need a dedicated MDF room with as much equipment. So we combined the MDF with a storage room, downscaled the amount of equipment, and met our energy consumption goal,” he explained. By doing away with the MDF room, their energy load went down in another way, as well. Once the SCA and CTA reduced the size of the equipment, they reduced the heat buildup in the room, and they no longer needed a dedicated air-conditioning unit.

The project team also reduced the number of appliances they put in the pantry. Some of the warming and cooling equipment were deemed simply unnecessary for a school of this size. So, the team removed the excess, streamlining the pantry’s equipment.

In the end, UPK Q368 is estimated to use only about one-eighth the amount of energy – or 16,150 kilowatt hours (kWh) – when compared to a typical public school, or approximately 169,035 kWhs less per year. For perspective, the average annual electricity consumption for a U.S. residential utility customer is just under 10,800 kilowatt hours. Thus, this pre-kindergarten’s annual electric bill will be just over $5,200, which will be saving almost $36,000 per year in energy costs. Moreover, UPK Q368 will prevent approximately 126 metric tons of CO2 from being released into the environment each year. In terms of greenhouse gases, this would be the equivalent of taking nearly 27 average passenger vehicles off the road per year, or powering the average home for nearly 19 years, or switching 4,210 incandescent light bulbs to LEDs, or consuming 291 barrels of oil.

CTA wanted each classroom to have its own distinct color “language.” Therefore, the team made one classroom yellow, one green, and one blue. Three of the gypsum walls in all three of the classrooms are painted a very pale yellow color, with the fourth accent wall painted in a vibrant hue to match that classroom’s theme. Similarly, all of the classrooms’ vinyl floor tiles are in a checkerboard pattern, with the predominant field a speckled white with the accent tiles mirroring that classroom’s chosen color theme. Meanwhile, the designers brought the effervescent yellow, green, and blue of the classrooms into the common areas, particularly in the hallway and the front lobby-type area.

The lobby area is actually a particularly unusual feature in a pre-kindergarten. Such a space is not specified by the SCA. Rather, it was HANAC’s requirement. The organization wanted to make sure that when one is walking down 101st Street and is looking into the pre-K space, one immediately sees children playing or interacting with one another in some way. In other words, the glass façade of the first floor should make it clear that in one part of the building there are children, and in the other part of the building there are seniors.

The firm’s projects also include the exterior renovations to the New York State Legislature Building in Albany, NY; conversion as well as an adaptive re-use of the historic Arcade Hotel in Bridgeport, CT’s Downtown South Historic District.