China’s NOCs to be Fourth Highest Upstream Investors in Africa Over Next Five Years, Says GlobalData 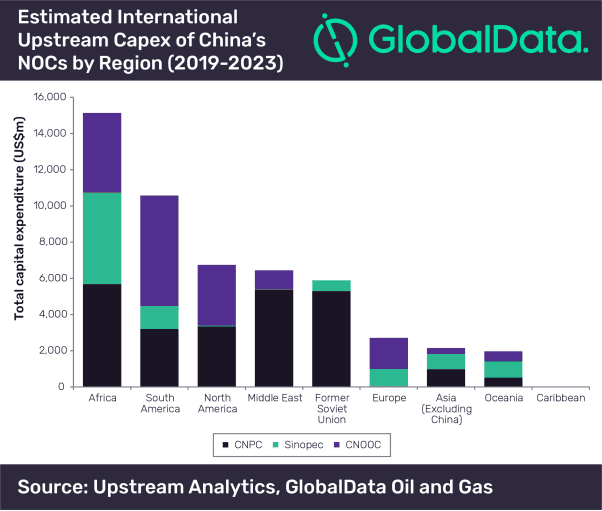 China’s national oil companies (NOCs) are increasingly investing in Africa to secure oil supplies to help feed surging domestic energy demand. As a result, their development and production capital expenditure (capex) in Africa’s upstream sector is forecast to be the fourth highest between 2019 and 2023, behind global counterparts BP Plc, Royal Dutch Shell Plc and Eni SpA, according to GlobalData, a leading data and analytics company.

While domestic asset developments remain the core strategies in the near to mid-term, the three China’s NOCs’ investment in Africa comes in the first place among all overseas regions and accounts for nearly 30% of combined international upstream capex.

Cao Chai, Upstream Analyst at GlobalData, comments: “Around two-thirds of the spending is in Nigeria, Angola, Uganda and Mozambique. Sinopec and CNOOC are well established in Nigeria and Angola while CNPC has a stake in the Rovuma LNG project in Mozambique.”

Investment in Africa’s upstream sector by China’s NOCs started more than two decades ago. However, until the beginning of the 21st century, China’s presence was limited to Sudan, where CNPC was a major stakeholder in the Great Nile Oil Project Company.

Chai continues: “Since then, the surging domestic energy demand has led China to diversify its natural resources imports and the upstream footprint of China’s NOCs has increased substantially to nearly 20 African countries.”

Increased production volumes from Africa are expected due to the ramp up of the Egina field in Nigeria. CNOOC E&P Nigeria, a wholly-owned subsidiary of CNOOC, holds 45% interest of Oil Mining Lease 130 block, in partnership with the Nigerian National Petroleum Corporation (NNPC). The field, which commenced production earlier this year, is expected to reach its peak production of approximately 200,000 barrels of crude oil per day (boed) in 2019.

Chai concludes: “China’s NOCs intend to position themselves as global players in the international oil market. With CNPC and Sinopec’s new projects also coming online, the total production in Africa for the three companies is projected to be between 430,000 and 440,000 boed post 2020, accounting for nearly 20% of the their overseas volumes.”

4,000 of the world’s largest companies, including over 70% of FTSE 100 and 60% of Fortune 100 companies, make more timely and better business decisions thanks to GlobalData’s unique data, expert analysis and innovative solutions, all in one platform. GlobalData’s mission is to help our clients decode the future to be more successful and innovative across a range of industries, including the healthcare, consumer, retail, technology, energy, financial and professional services sectors.