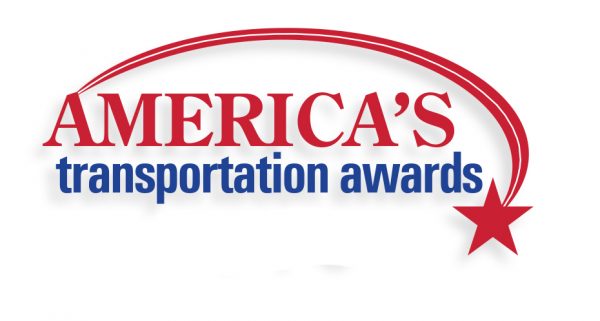 As reported by the AASHTO Journal: https://aashtojournal.org on June 17, 2019 - in Awards, News, People

Sponsored by AASHTO, AAA, and the U.S. Chamber of Commerce, the 12th annual America’s Transportation Awards competition divides transportation projects up in three categories: Quality of Life/Community Development, which recognizes projects that have significantly benefited the community in which they exist, especially in the form of economic growth and well-being of citizens; Best Use of Technology & Innovation, which recognizes new technology and/or creative solutions implemented by a state department of transportation; and Operations Excellence, which recognizes projects that deliver a more reliable, well-functioning, and/or safer transportation system through operational solutions. Project categories are also designated by size: small (projects costing less than $25 million), medium (projects that cost between $25 million and $200 million), and large (projects costing more than $200 million).

The winners from the Western Association of State Highway and Transportation Officials regional competition are:

The WASHTO winners are the first to be announced in what will be a total of four regional competitions. The three highest-scoring projects from each region will earn a place on the list of “Top 12” projects. Those 12 projects will compete for the Grand Prize, selected by an independent panel of industry judges and the People’s Choice Award, which is chosen by the general public through online voting. The top two winners also receive $10,000 cash awards, to be donated to a charity or scholarship of the state DOT’s choosing. The Top 12 projects will be announced on Aug. 23, when online voting for the People’s Choice Award will begin. The winners of the top two awards will be announced Oct. 7, at the AASHTO Annual Meeting in St. Louis, MO. Learn more about the nominees and the competition at https://americastransportationawards.org/.