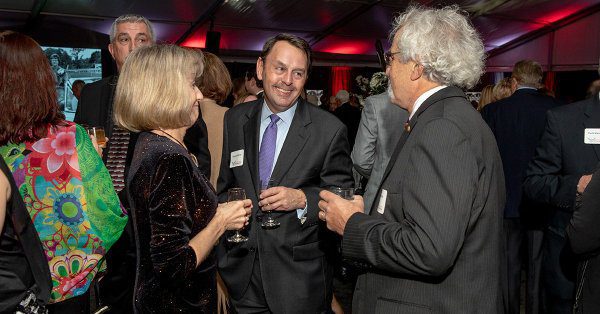 MUNCIE, Indiana — One of the most comprehensive and largest design colleges in the country will bear the name of a former trustee and exemplary alumnus, in recognition of his service and generosity to Ball State University. During a special meeting today, the Board of Trustees approved the naming of the R. Wayne Estopinal College of Architecture and Planning (CAP).

Board Chair Rick Hall remembered Trustee Estopinal for his grace, sense of humor, and passion for Ball State.

“Wayne exemplified what it means to be a loyal Cardinal,” he said. “He supported students, faculty, and fellow alumni in every manner possible for decades. Most importantly, Wayne loved our University enough to challenge it to strive for the highest level of excellence and had the courage to overcome obstacles to fulfilling those aspirations. Naming the college after him is a tribute to his exceptional leadership and commitment to Ball State, which will have a lasting effect for generations to come.”

Trustee Estopinal, a 1979 CAP graduate, was president of the firm TEG Architects, which he founded in 1989 in his hometown, Jeffersonville, Indiana. He served on Ball State’s Board of Trustees from 2011 until his death on November 30, 2018. He had also served on the Alumni Council, including its Executive Committee, and the Ball State University Foundation Board of Directors. His company employed more than 100 Ball State alumni and dozens of interns. Trustee Estopinal tragically passed away when his plane crashed while traveling to attend a Ball State University alumni event in Chicago.

“Through his service and commitment to others, Wayne truly represented the spirit of Beneficence that is intrinsic to Ball State,” President Mearns said.

Dave Ferguson, dean of Estopinal College, said he is grateful for Trustee Estopinal’s leadership and support.

“Our alumni are one of our greatest assets, and that was true of Wayne,” Dean Ferguson said. “Like many of our graduates, he made an impact in communities throughout Indiana and the United States. He was what we want our students to be: professionally prepared, creatively curious, globally aware, and locally engaged. His generosity toward Ball State and toward CAP in particular has been exemplary.”

Ball State is home to Indiana’s only state-assisted college of architecture and related fields of the built environment. Its programs include a full range of disciplines found in professional offices — from the planning of cities to interior design, landscape architecture, historic preservation, urban design, and architecture, as well as construction management.

For more information about the Estopinal College of Architecture and Planning, visit bsu.edu/cap [link to https://www.bsu.edu/academics/collegesanddepartments/cap].

Founded in 1918 and located in Muncie, Ball State is one of Indiana’s premier universities and an economic driver for the state. Ball State’s nearly 22,000 students come from all over Indiana, the nation, and the world, and its 780-acre campus is large enough to accommodate premier facilities and 19 NCAA Division I sports but small enough to ensure the friendliness, personal attention, and access that are the hallmarks of the University.