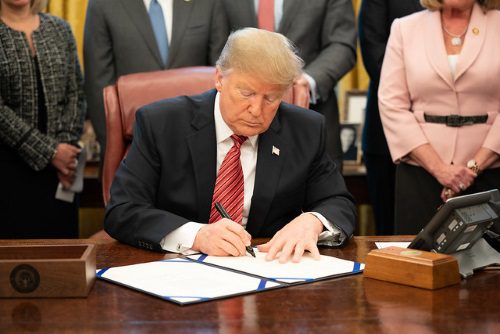 President Donald Trump signed into law H.R. 2157 – the “Additional Supplemental Appropriations for Disaster Relief Act of 2019” – on June 6 that provides $19.1 billion to cover recovery and other costs associated with a series of catastrophic disasters that have struck the United States over the past three years.

That money includes $3.3 billion in funds for the Army Corps of Engineers to repair damages caused by natural disasters, to invest in new flood and storm damage reduction projects, and to make the U.S. infrastructure “more resilient” to future natural disasters.

The Federal Highway Administration receives $1.6 billion from H.R. 2157 to help bolster its Emergency Relief “quick release” funding program, which state departments of transportation are tapping to help them repair roads and bridges damaged by a range of disasters, including the recent Midwest flooding.

Additionally, the Federal Transit Administration gets $10.5 million for its emergency relief program from this additional appropriations funding as well.

As reported by the AASHTO Journal: https://aashtojournal.org/