BOSTON, MASSACHUSETTS – June 7, 2019 – Finegold Alexander Architects is proud to announce that it received two Honor Awards for Design from Interfaith Design for the design of Temple Israel in Omaha, NE and Congregation B’nai Jehoshua Beth Elohim (BJBE) in Deerfield, IL.  Initially announced in ID’s publication Faith & Form, the awards were presented at the American Institute of Architects (AIA), National Convention in Las Vegas, Nevada on June 6, 2019.  Interfaith Design is a knowledge community of the AIA.

“We are thrilled that these outstanding projects are being honored by Interfaith Design and the AIA,” said Rebecca Berry, President, Finegold Alexander Architects. “The Congregations contributed significantly to the design of these spaces, and we credit the award-winning outcome as the result of fruitful working partnerships, as well as our long experience in designing worship spaces.”

These are the 6thand 7thID Awards received by the firm.  Finegold Alexander Architects most recent ID Award was for Harvard University’s Memorial Church. 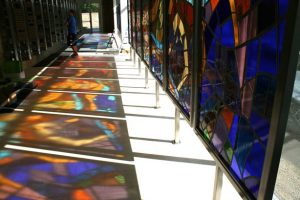 About Temple Israel, Omaha, and the Tri-Faith Initiative

The first Honor Award is for Temple Israel, in Omaha, completed in 2013.  Temple Israel, an established reform synagogue, re-located on land that was once a country club. The synagogue is part of a larger whole, the Tri-Faith Initiative. On adjacent sites are a Church, an Islamic Center, and a Tri-Faith center, the first of its kind in the United States. Finegold Alexander developed the conceptual master plan for this highly publicized project, demonstrating how three faiths could not only co-exist, but thrive together as a community. Architecturally, the subsequent buildings which were designed by others, relate through similar uses of materials, light, land planning, and sustainable concepts.

Temple Israel’s mission is to pursue social justice.  “With that in mind, the 60,000 SF building was designed to not dominate, but to build a bridge for dialogue and contemplation,” said Moe Finegold, Senior Principal, Finegold Alexander Architects. “The goal of the overall project was to enhance these three different faiths’ shared values; therefore, the mission was especially significant in how this building was to be designed.”

The design concept delineated three distinct functions and purposes:  The House of Worship, House of Assembly and House of Study.  These three functions were expressed on the exterior as massing volumes of different heights.  The sanctuary, which seats 900, is the largest and tallest of the sections, and is sheathed in a translucent glass that glows from within like a lantern. The lower walls are comprised of Jerusalem stone to represent the building’s historical connection. The three volumes are arranged informally around a community court gathering space. The design includes liturgical art and artwork both new and relocated from the previous temple, that can be seen in the sanctuary, communal areas, and sculpture gardens.

“The overall design maximizes views to the surrounding natural site and utilizes abundant natural light within.  The building and design respect the past while expressing the congregation’s values which embrace the future, and are committed to community, understanding, and trust with the Tri-Faith partners on its shared campus,” added Finegold. 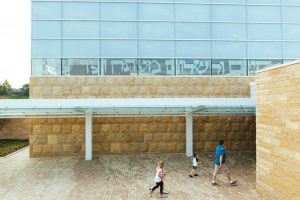 The second Award presented to Finegold Alexander was for the B’Nai Jehoshua Beth Elohim, (BJBE), Synagogue in Deerfield, Illinois. BJBE, also an established Reform congregation, wanted to relocate from Glenview to Deerfield, Illinois due to demographic shifts. The only available property was one half of an underutilized one-story six-building office complex built in the 1970s.

“The challenge for Finegold Alexander was to create a ‘spirituality of space’ in a banal environment,” said Berry.  “In collaboration with the Rabbi and community leaders, we envisioned a place for gathering and multiple spaces for reflection and worship. These ‘pockets of holiness’ became a major guiding design charge, and there are several.” 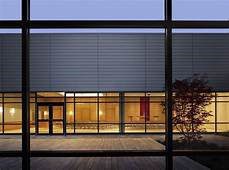 A contemplation space sits within a memorial alcove and seats up to 20; a chapel/beit midrash (a place of study), surrounded by texts, seats 100. The sanctuary with a capacity of 600 is shaped and organized to allow intimacy for a small congregation in its main area expanding into a loge and a cascade leading to a balcony. The social hall doubles as sacred hall, and seats 1,200 for High Holy Days. Small seating groups throughout the community spaces add informal opportunities for discussion.

The new facility, totaling 71,000 SF, is entered through a village center that is adjacent to an interior courtyard; this space is filled with light and serves as an orienting space, providing direct access to all the major synagogue functions. The design solution involved partial building demolition and reconstruction to accommodate the large footprint high ceiling height spaces required for the sanctuary and social hall.  Existing infrastructure was reused and energy efficient mechanical and electrical systems were installed.

Many of the liturgical elements, including the new Ner Tamid (Eternal Light) were custom designed for the Sanctuary. Inscribed on the Ner Tamid is L’Dor V’Dor “From generation to generation.” BJBE now has a welcoming, sustainable home for generations to come. The congregation has grown and thrives in its welcoming and sustainable environment. 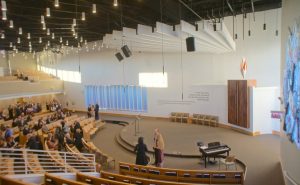 Finegold Alexander Architects is a design collective focused on creating architecture for public, private and mission driven organizations. Our projects, whether they be new construction or renovations, are integrated into their physical, cultural and environmental contexts. We are passionate about working across disciplines, project types and scales to arrive at fresh solutions. We believe that our future and that of the planet depends on sustainable, interdisciplinary, and collaborative achievements. We listen. Our buildings speak.