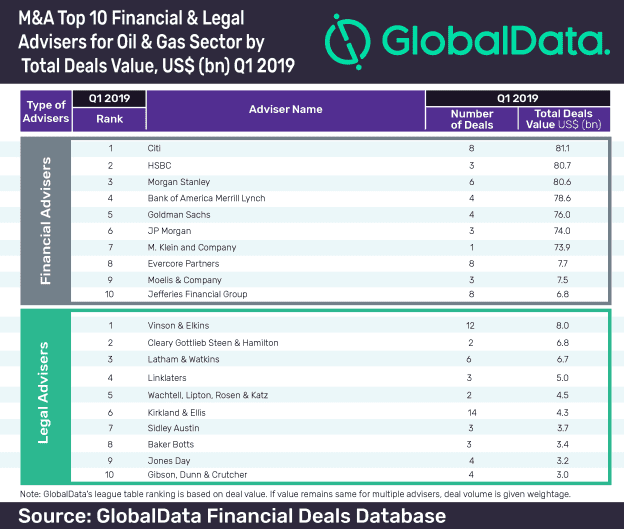 Citi has retained the top position in the latest mergers and acquisitions (M&A) league table of the top 10 financial advisers for the oil & gas sector based on deal value for the first quarter (Q1) 2019, according to GlobalData, a leading data and analytics company.

The American multinational investment bank topped the rankings with a deal value of US$81.1bn, by advising on eight deals during the quarter, which incidentally was the highest in terms of volume (a figure shared by two others). HSBC was a close second with US$80.7bn earned on the strength of just three deals.

According to GlobalData, which tracks all M&A, private equity/venture capital and asset transaction activity around the world to compile the league table, Morgan Stanley took third place with six deals worth a total of US$80.6bn.

GlobalData league tables are based on the real-time tracking of thousands of company websites, advisory firm websites and other reliable sources available on the secondary domain. A dedicated team of analysts monitors all these sources to gather in-depth details for each deal, including advisor names.

To ensure further robustness to the data, the company also seeks submissions from leading advisors, through an advisor submission forms on GlobalData, which allows both legal and financial advisors to submit their deal details.