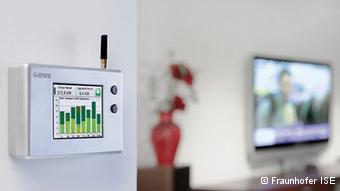 By 2030, four out of five people will live in megacities. Supplying them with power and water will be crucial. IT networking, intelligent power grids and sustainable energy should help create a “smart city.”

The future of the power grid has already began in Christof Wittwer’s Smart Energy Lab at the Freiburg-based Fraunhofer Institute for Solar Energy Systems (ISE). In a room about the size of a transit bus, Wittwer has arranged switch cabinets, control panels, battery systems and a mini power station. His goal isn’t only to talk about an intelligent power grid but to try it out.

“We are trying to answer the question about how can we manage thermal and electric energy consumption and production, and optimize tomorrow’s energy grid,” says Wittwer.

One source for heat and power supply

In the future, electricity and heat will be produced together in a micro-combined heat and power (CHP) system, which is reminiscent of an oversized freezer in Wittwer’s Smart Energy Lab. Instead of getting energy from large power facilities, it will be produced onsite in the future, according to Wittwer. And it will be decentralized, either through solar panels or small wind turbines on the roof, warm pumps in the cellar or even through a small block and heat power station, which makes power and heat at simultaneously from biogas or wood.

“Here in the lab, we have a CHP system combined with thermal stratified storage tanks as well as a thermal storage tank with water inside.” Wittwer said.

This allows for the heat resulting from the electricity production to be used for heating or hot water – for your own home or for a whole neighborhood in a district heating network. But that’s not all that is possible with intelligent power and heating networks of the future, the researcher explained. Biogas-powered micro-CHP systems would be particularly well-suited, to bridge those networks at those times when no solar energy or wind energy are fed into the grid.

“That means, that the combined heat and power plants will be operated at full load and the heat will not disposed of but stored in the thermal storage tank of the facility,” says Wittwer.

Ensuring that the smart grid works

In the smart grid, consumers will be supplied with different sources of energy, mobile and stationary storages and variable electricity rates and most of all grid stability. That’s because there is a risk of dangerous fluctuations if the supply of renewable energy, which depends on time and weather, is not brought in line with the current power supply – blackouts would be the worst case scenario.

Professor Bruno Burger, an expert in power electronics, is convinced that an intelligent power grid can help itself in a crisis situation. That’s why he enacts this crisis situation again and again.

In the megawatt laboratory at the Fraunhofer Institute ISE, Burger is testing every electronic component, which can feed the power produced in a home system into the power grid. He is convinced that converting solar power into standard household current (AC) will crucial stabilizing the grid in the future. Because even if the power grid collapses, power produced by the solar generator could be fed into it.

“If the tension in the grid goes back 25 percent, then the converter even feed power into the grid by factor of three or four times than in normal operations and can therefore also support the grid,” he said.

Working together to produce a stable power grid

In the future, smaller producers of wind and solar energy will also manage the power grid – automatically operated and controlled in real-time via energy control rooms.

“One converter alone cannot prevent a blackout, but several working together can do that,” said Burger.

But converters could also cause a blackout if they all malfunction, he warns. Christof Wittwer’s research at the Smart Energy Lab should help prevent that. He is looking into how batteries from hundreds of thousands of electric cars – controlled via a central IT network – could serve as temporary storage places for surplus electricity.

It is just one of the many ideas that Christof Wittwer is working on in the area of intelligent storage solutions to better balance energy supply and demand in the future. Large industry customers especially could also help balance energy intensive production processes with the energy supply from wind and solar energy, he said: “For example, that could also mean that if there is too much solar energy in the grid, that one also uses heating elements to shift the surplus energy in to the thermal network.”

Just how much energy consumers themselves will be a part of the intelligent power grid remains open. That’s because the use of smart electricity meters has stalled in this country. With smart meters, the customer should have more incentives to turn on electric appliances like washing machines when there cheaper renewable energy in the power grid. For Christopf Wittwer at the Smart Energy Lab, the proof will be in the pudding: making the power grid intelligent isn’t just a question of technology but also human behavior.