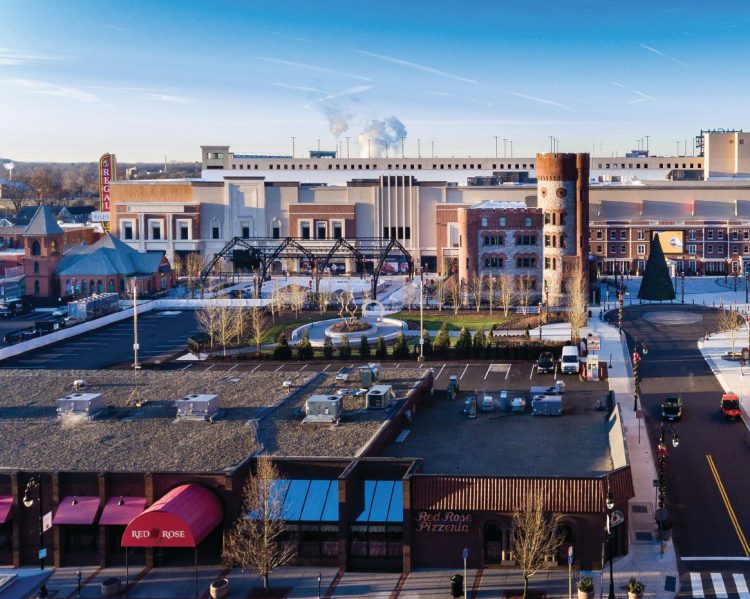 June 1, 2011, was a tragic day in Springfield, Mass. (settled since 1636, it’s Massachusetts’ third-largest city); seven devastating tornadoes touched down in and around the city, killing three people, injuring 300 and leaving more than 500 homeless. Several residential and commercial sections of Springfield were more or less wiped out entirely.

Recovery has been difficult, but one important piece of the puzzle fell into place in 2018 when a major ($960 million) redevelopment of a 14.5-acre downtown section was completed. The new MGM Springfield resort casino—the only full-service casino in Massachusetts—adds 850,000 square feet of dining, entertainment, hotel, residential and retail space as well as more than 3,000 permanent direct jobs. The redevelopment lies between Main Street and East Columbus Avenue from east to west, and from State Street to Union Street from north to south, an area equivalent to about nine football fields. This particular area was hit hard by the 2011 tornadoes, and several historically important buildings were affected, including one on the National Register of Historic Places.

Statewide, casino gaming is somewhat controversial, and the Springfield resort almost didn’t happen due to a 2014 referendum attempting to ban casinos in Massachusetts. But locally, enthusiasm was high from the beginning, especially since MGM proposed a site plan and development process that was highly sensitive to local concerns. Chief among these concerns was respecting the deeply historical character of Springfield. Buildings that would be affected by the MGM site plan included the following:

• The State Armory, another Gothic structure, built in 1895 for the local militia. The rear drill shed was reduced to rubble by a 2011 tornado, and using the remainder of the armory effectively in the MGM resort required a complete gutting of the interior and a structural renovation.

• A Beaux Arts-style building built in 1910 for the United Electric Light Company. A granite façade and an ornate stained-glass dome from this building were refurbished and incorporated into prominent locations within the casino.

• The 172-year-old Union Hotel, once considered Springfield’s finest and visited by President James K. Polk in 1847. The façade of this building was incorporated into a portion of MGM Springfield’s new brick enclosure. 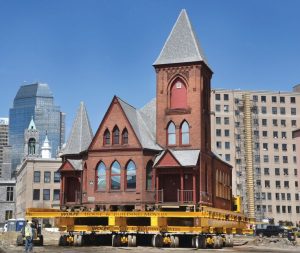 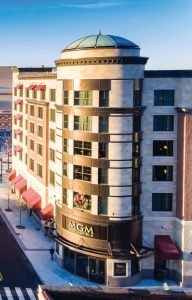 All parties agreed that the 129-year-old First Spiritualist Church needed to be preserved … and that the 475-ton building was in the wrong location.

All this dramatic intervention with very old, very beautiful buildings required extremely skilled and sensitive structural engineering and project management. Fortunately, MGM contracted with DeSimone Consulting Engineers, one of the world’s top 500 design firms, with special expertise in both casino design and structural restoration. From the beginning of their involvement in the project in early 2015, DeSimone focused on preserving and showcasing the Springfield site’s exceptionally rich historical character.

“Our goal was to maintain the historic values of Springfield and incorporate them into a large new venue that would become the new epicenter of the city,” says President and CEO Stephen DeSimone. “Those who visit MGM Springfield will experience historic Springfield as they enjoy the dynamic casino and hotel.”

Associate Principal Jarret Johnson, P.E., was lead engineer and manager for the Springfield project, applying a wealth of specialized experience; his many notable projects include Vdara, the 1.7-million-square-foot condo hotel within MGM’s CityCenter in Las Vegas as well as the Providence Renaissance Hotel, Rhode Island’s largest renovation, which involved the structural renovation and conversion of a 90-year-old, magnificently derelict Masonic Temple.

“This was a very complex downtown site, and it was a good thing we were involved from the beginning,” says Johnson. “Our site preparation was extensive, including surveys, investigations and laser scanning of facades, and some demolitions and clean up.” Much of the “cleaning up” had to do with one of the downsides of a history-rich site: “This wasn’t a brownfield by any means, but it’s a former industrial zone and did require a lot of mediation. We oversaw the removal of 24 underground storage tanks of various types and ended up shipping more than 32,000 tons of soil offsite.”

And there was the little detail of moving a 129-year-old massive brick church about 600 feet. 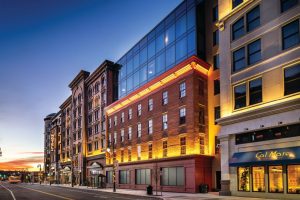 Blending in with existing downtown facades and cityscapes was a prime goal of the casino resort development.

“It had to be moved to fit the configuration of the site,” Johnson says of the First Spiritual Church. “The only way to get a workable casino layout was to put a gaming floor where the church was.” With that irony noted, DeSimone turned its talents to the task of organizing a respectful move of the building that preserved its beauty and historic value.

The church is a massive brick structure, complete with an approximately 70-foot tower and occupying a 68- by 43-foot footprint—the total weight moved equaled 475 tons. Incredibly, the entire move and rotation was accomplished in less than one day. 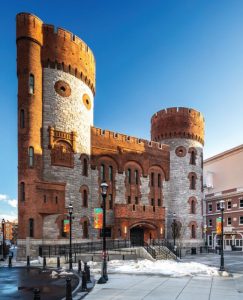 The State Armory has been a prominent downtown feature since 1895 and continues as an entertainment space thanks to extensive structural renovation.

“Of course, that was after weeks of work to stabilize and prepare the structure,” explains Johnson. “But once it was ready to go, it seemed like a good idea to get it situated as quickly as possible, and there was no reason to wait—the path was clear, and there were no streets to cross.”

The work of stabilizing, lifting and moving the church was accomplished by specialty subcontractors Wolfe House & Building Movers, who have been successfully undertaking some of the nation’s most spectacular building relocations since 1970, including the Belleview Biltmore Hotel in Belleair, Fla., a five-story, timber-frame hotel incorporating eight multi-story fireplaces. At 1,750 tons, the Belleview is one of the heaviest frame buildings ever moved. 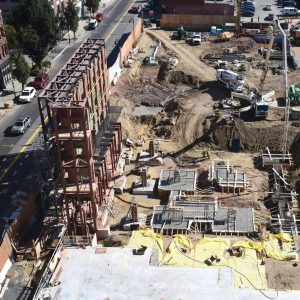 Extensive site preparation included the removal of 24 underground tanks and 32,000 tons of soil from this former industrial zone.

Small by comparison, moving the First Spiritualist Church was still a tricky project requiring careful attention. After weeks of careful bracing and reinforcement—and the installation of 68 steel beams—the entire building was lifted by 20 hydraulic jacks and set down on 14 “Buckingham Dollies,” ready to move.

The actual event was a big day in Springfield, the most-visible early indication of MGM’s commitment to the preservation of local historical character. Several news crews were onhand as well as Springfield Mayor Domenic Sarno, who said, “I think if you look at the definition now of ‘Holy Roller,’ that might fit the bill right there.”

The church ended up in a new location near the resort’s skating rink and currently houses a Kringle Candle franchise. 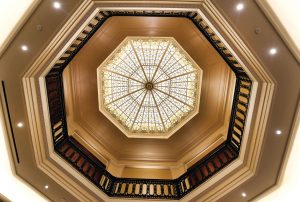 This ornate stained glass dome is more than 100 years old and required extensive restoration before being reused in the main casino complex.

In many ways, the MGM Springfield casino resort is a gamble for both Springfield and MGM. For Springfield, a big swathe of downtown and a large fraction of the city’s legitimately rich historic character is being put at risk in hopes the resort will return jobs and entertainment as well as maintain and extend the Springfield culture that created the history in the first place. For MGM, almost $1 billion is being invested in a decidedly atypical gambling venue—for example, the casino and hotel complex has a dozen entrances, which differs from typical casino floorplans that force patrons to pass through the gaming floor to reach the hotel and amenities. And, of course, rather than standing out with big and flashy architecture, MGM Springfield is designed to match and complement existing streetscapes and facades of the city’s South End.

“MGM Springfield will fit seamlessly into the historic character of downtown Springfield while creating a landmark destination for entertainment and excitement,” said Michael Mathis, president of MGM Springfield, on MassLive on June 24, 2018. “Our design celebrates what is authentic while spotlighting the iconography of the region’s past in creative ways.”

This commitment to Springfield’s historic character isn’t just window dressing tacked onto a site plan to secure approvals; it’s more of an essential business strategy intended to make an unconventional casino resort location a win/win for all stakeholders. And it’s an extraordinarily thorough business strategy; for example, historian Wayne E. Phaneuf was recently able to show that writer Theodor Geisl—far better known as Dr. Seuss—was born on March 2, 1904, in Armory Square, which now is MGM Springfield’s outdoor event space. The exact spot now is marked with a plaque.

The Springfield Armory, which has been an iconic feature of Springfield’s downtown since 1895, was an important component of the development’s historical restoration and required a great deal of sensitive reconstruction to make it a functional entertainment venue. “Structurally, the interior was a complete gut job,” notes Johnson. “The original interior featured several load-bearing walls that cut the space up into three small rooms with a big central corridor. MGM looked at using the space as is, but it didn’t really have the flexibility needed for restaurant and entertainment use.”

To remedy that, DeSimone devised a plan (based on extensive analysis of exterior walls) that called for demolishing all interior structure, new lateral reinforcement, new steel roofing support and a handful of new interior columns. This extensive work refashioned the Armory as a flexible, all-purpose space that currently features a restaurant and a popular comedy club.

Smaller historical details were incorporated throughout the new resort, creating a comprehensive “local” look. The ornate stained-glass dome from the aforementioned United Electric Light Company building is a good example.

“We were primarily tasked with making sure this feature was effectively showcased in the new casino complex,” adds Johnson. “We found subcontractors who specialized in this kind of work, and they were able to remove the dome in two pieces, replace damaged stained glass, and then reassemble the whole thing offsite. Now it’s a very beautiful addition to the casino.”

Even finer details were included: the hotel lobby is lined with walls of books by local authors and yearbooks from local high schools, and many hotel suites include dining tables made from a locally famous tree that used to stand on nearby Bliss Street.

For Johnson, all this attention to detail and the sheer scope of the project made MGM Springfield one of the more exciting challenges of his career. “For me personally, one of the most satisfying things about this development was the feeling of working on so many ‘subprojects,’” he says. “Most projects are just one big building, but here it was more like 20 little buildings or features that all had to work together in a very complex site. At the opening, I ended up running around for several hours just trying to get to all the different areas we worked on, like the movie theater built above the bowling alley. It was like the payoff of 20 projects packed into one opening.”

Ultimately, this big bet is paying off; hiring and revenue projections are being met, Springfield locals appear to be delighted with the new downtown amenities, and MGM continues to support historical restorations in the area.