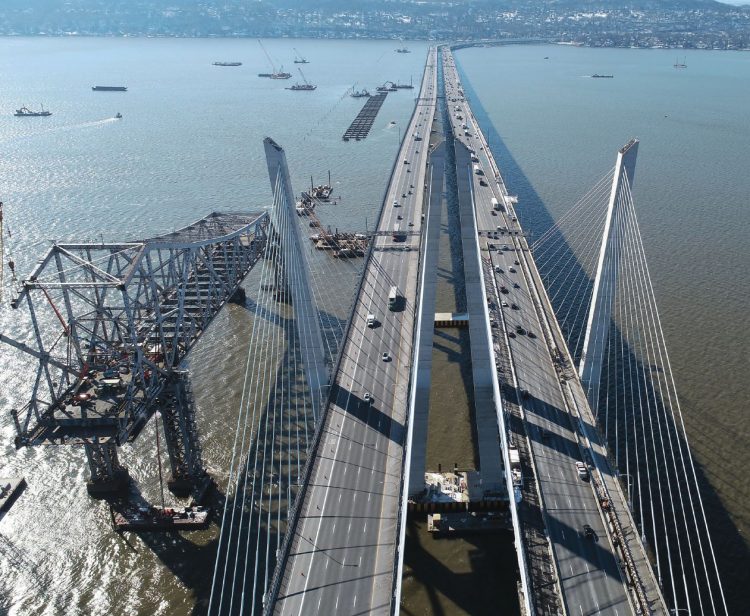 The Governor Mario M. Cuomo Bridge is about more than connecting one point to another. The iconic structure also is an important feature in the social and cultural fabric of the communities it serves, crossing the Hudson River between New York’s Westchester and Rockland counties.

Located less than 20 miles north of New York City, the new 3.1-mile state-of-the-art, twin-span, cable-stayed bridge crosses one of the widest parts of the river. Replacing the Governor Malcolm Wilson Tappan Zee Bridge, the final span of the new bridge opened to drivers on Sept. 8, 2018.

“We’re proud of the team that delivered the Governor Mario M. Cuomo Bridge to New York,” says Terence Easton, president of Fluor’s infrastructure business line. “This is a landmark project that provides a vital link to the region and improves daily commerce.”

The bridge was designed and built by Tappan Zee Constructors (TZC), a consortium of design, engineering and construction firms, including Fluor, American Bridge, Granite Construction and Traylor Bros., along with HDR, Buckland & Taylor, URS, VSL and GZA. The $3.98 billion bridge is one of the largest single design-build contracts for a transportation project in the United States and the largest bridge in New York state history.

Each span of the new bridge carries four lanes of traffic as well as space for disabled vehicles, emergency responders and buses. The new twin-span crossing also is mass-transit ready—designed to accommodate future commuter rail—and features a state-of-the-art traffic-monitoring system. There also will be a shared-use path for bicyclists and pedestrians.

The original Tappan Zee Bridge, a beautiful and iconic structure in itself, outlived its useful life. The bridge opened to traffic in 1955 and, until its retirement on Oct. 6, 2017, was a vital artery for residents, commuters, travelers and commercial traffic.

A lasting icon for New York’s Hudson Valley, the new Governor Mario M. Cuomo Bridge is a visually striking landmark and one of the widest cable-stayed structures of its kind in the world. 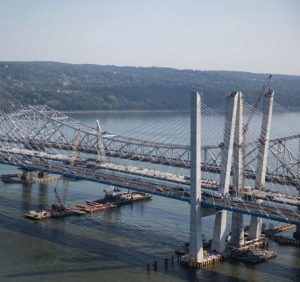 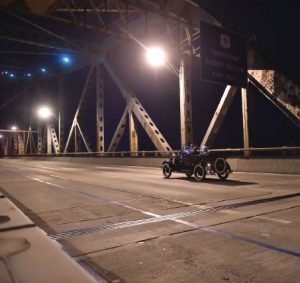 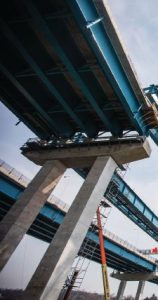 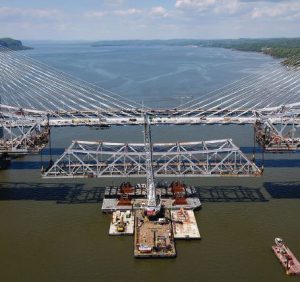 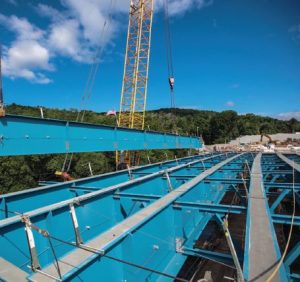 Bridge traffic grew to about 140,000 vehicles per day in 2016, far more than the Tappan Zee was designed to support. Heavy traffic, narrow lanes and the lack of emergency shoulders had the potential to create unsafe driving conditions. As a result, the bridge had twice the average accident rate per mile as the rest of the 570-mile New York State Thruway system. Hundreds of millions of dollars were spent to maintain the structure in recent years, and the cost of maintaining it for the foreseeable future rivaled the cost of the new bridge, with no improvements to current traffic conditions. The New York State Thruway Authority retired the bridge after nearly 62 years of service.

The Governor Mario M. Cuomo Bridge was designed and built to last more than a century without major structural repairs. The new bridge is a visually striking, recognizable landmark, and one of the widest cable-stayed structures of its kind in the world. Cable-stayed refers to a type of bridge where the deck is supported by straight cables attached to the top of towers. The towers are built first, and then deck sections and stays are attached progressively.

The iconic main span serves as the bridge’s signature aspect.

The cable-stayed main span is supported by eight 419-foot towers, which stand at five-degree angles and feature a sleek, chamfered design. The angled design was selected by the project’s Visual Quality Panel, which was comprised primarily of Rockland and Westchester residents. The outward incline of the towers creates a unique look and eliminates the need for an upper transverse tower strut—a structural element typical between two towers—adding to an open-air experience while crossing the bridge. The iconic towers support 192 stay cables, which are made up of roughly 4,900 miles of steel strands. This solution achieves a clean aesthetic, enhances structural support, has vastly improved safety features and maintains the open-air feeling of the Hudson Valley.

The bridge’s shared-use bike and pedestrian path will include six overlooks—resting points that will reflect the culture and history of the Lower Hudson Valley. The shared-use path will provide a new connection for non-motorized transport in the region and offer an exciting recreational opportunity that currently doesn’t exist in Rockland or Westchester.

Using building information modeling (BIM) software, HDR designed the new bridge and compiled every detail in a secure database before any actual construction commenced. Design refinements were carried out as construction progressed, with BIM helping designers and builders overcome the unforeseeable challenges that emerge on every large construction project. For many decades after the bridge is completed, the BIM model, which contains nearly 1 million data points, will assist maintenance teams. The model includes the bridge itself as well as the adjoining facilities and bridge landings. 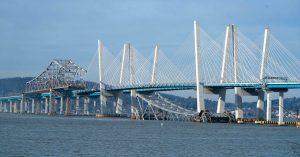 One of the largest challenges for the bridge’s project engineers was construction of the massive main-span pile caps, the bases for the 419-foot towers of the twin-span crossing. Normally, constructors would use a cofferdam system, with workers sealing off an entire area of the river to create a dry workspace. However, TZC had to deal with the Hudson River, which is more than 40 feet deep, subject to 6-foot tides and has powerful currents running through its navigational channel. These conditions, combined with the size of the pile caps, led TZC to employ an alternative approach.

TZC turned to VSL, a company known for creative solutions to unique construction challenges. VSL engineers devised a system of 34 synchronized hydraulic jacks that could safely lower empty “tubs” that surround the pile caps, the shell from which the full structure is composed. In 2014, the tubs were lowered into the river with amazing precision. Each tub, constructed of slabs of concrete and sheets of steel, weighed hundreds of tons and measured more than 360 feet long. 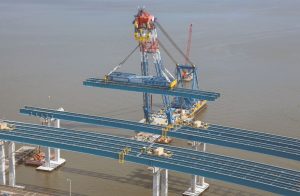 The extraordinary lifting power of the I Lift NY super crane played a vitally important role on the project.

Acknowledging the enormity of the job, a VSL engineer observed, “We’ve done this hundreds of times around the world, but never with something the size of a football field.”

Engineers spent months planning every detail and designing specialized support systems that would hold each section of the tubs evenly. The 34 hydraulic jacks were attached to the structures, each connected to more than a dozen strands of steel cable. The cables were woven throughout the tubs and fed through the jacks. Like a caterpillar moving up a branch, the jacks pulled on the cables, gripping and stretching them to painstakingly lower the pile caps into the river a few inches at a time.

Controlled by a central computer, the jacks moved in perfect unison. A series of sensors precisely indicated the position of each jack to within a fraction of an inch. Although the operation proceeded without incident, the system would have instantly stopped the process had any of the jacks gotten out of sync with the others. The movement of the tubs was barely visible to the naked eye, and it took nearly eight hours for each 14-foot-tall tub to be lowered 9 feet.

Once anchored in place in the river, the tubs’ 360-by-60-foot areas were drained of residual water. Work continued through the spring of 2015, as the caps were interwoven with cages of galvanized steel and filled with concrete.

Following the first year-plus of construction, when most of the work was below the waterline, New Yorkers began seeing the new river crossing taking its iconic shape in 2015. With a growing number of workers and an armada of approximately 130 floating cranes, barges, tugboats and other vessels onsite, TZC completed the bridge foundations and an increasing procession of bridge piers across the Hudson River.

When frigid winter weather conditions temporarily limited activity on the river, numerous offsite facilities were extremely busy as they fabricated elements of the new twin-span crossing. All the new bridge’s major components were manufactured in the United States. The project team created many of these components in large sections before transporting them to the project site. This prefabrication method allowed for easier assembly and installation on the Hudson River.

Precast concrete segments were formed in Schuylerville, N.Y., as well as at locations in Pennsylvania and Virginia. Steel reinforcement cages were wired together in Rockland County, and the bridge’s massive steel girders—measuring 12 feet tall and 350 feet long—were manufactured in Pennsylvania, assembled at the project’s Port of Coeymans facility south of Albany, N.Y., and brought by barge to the project site. The girders serve as the bridge’s connective tissue by joining the piers and supporting the bridge’s roadway.

With the largest girders weighing in at a hefty 1,100 tons, lifting them into place was a job tailor-made for a super crane that arrived at the project site in the fall of 2014. Nicknamed “I Lift NY,” the super crane is owned by TZC and officially registered with the U.S. Coast Guard as the “Left Coast Lifter.” Recognized as one of the largest floating cranes in the world, I Lift NY has a boom length of 328 feet—more than 30 stories tall.

The I Lift NY super crane played a vitally important role on the project, as its extraordinary lifting power helped reduce construction time by months from original estimates and reduce project costs by more than $1 billion. I Lift NY operations included placing the new bridge’s enormous pile caps, girders and deck segments. Later, it helped dismantle the existing Tappan Zee Bridge, removing 1,000-ton pieces of the bridge at once, enabling deconstruction to be completed much more efficiently than if it was carried out by standard-sized cranes. Without I Lift NY, the operation would have required an alternative construction approach or a different foundation design altogether.

Extensive measures were in place throughout the project’s duration to protect the environment and monitor the impact of construction on surrounding communities. Wildlife in the Lower Hudson Valley is rich and diverse, featuring endangered peregrine falcons, Indiana bats and Atlantic sturgeon. As a result, it’s necessary for large-scale operations such as the Governor Mario M. Cuomo Bridge project to undergo an extensive permit process to help protect these creatures.

The project team worked closely with the National Marine Fisheries Service, the New York State Department of Environmental Conservation and several other oversight agencies to minimize the project’s impact on the local environment. Examples include the use of equipment requiring less dredging, smaller pilings, extensive use of clean fuel technology, and a range of measures to minimize construction noise and protect wildlife.

Concrete and clean, recycled materials from the demolition of the former Tappan Zee Bridge will be used to support the development of six artificial reefs on Long Island. Other parts of the Tappan Zee Bridge also will be repurposed. Notably, 135 concrete deck panels were delivered last summer to state and local municipalities across New York, saving more than $4 million.

The new twin-span crossing is inspiring in its beauty and scale as well as in its delivery. The project created jobs for thousands of New Yorkers, stimulated the economy and delivered an iconic new bridge that will serve the community for the next 100 years.

Comments are disabled
NEXT ARTICLE
HNTB’s Shahram Vahdat appointed president of American Council of Engineering Companies – Los Angeles County chapter
May 28, 2019
PREVIOUS ARTICLE
Final Thoughts: When Did You Choose Your Career?
May 27, 2019