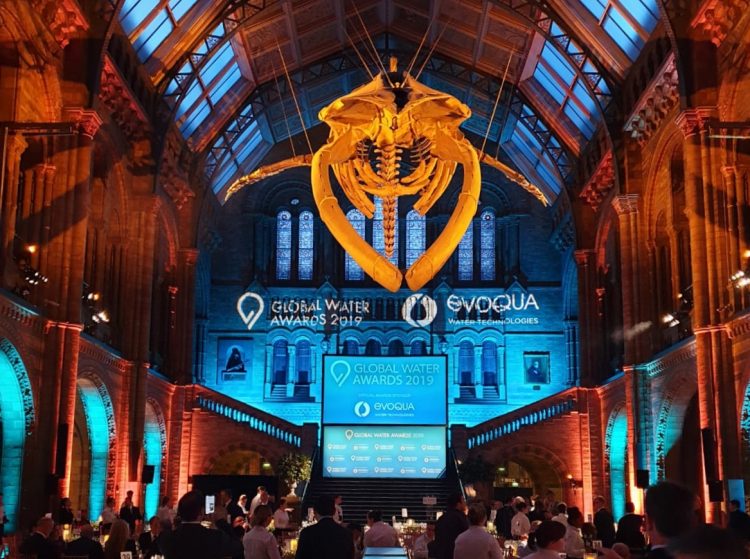 Global Water Intelligence (GWI) today announced the winners of the 2019 Global Water Awards, which were presented on Tuesday 9 April at the Natural History Museum, London as part of the Global Water Summit 2019. The coveted awards ceremony recognises the industry’s greatest achievements over the previous year, rewarding the initiatives and companies in the water, wastewater and desalination sectors that are moving the industry forward through improved operating performance, innovative technology adoption and sustainable financial models.

Christopher Gasson, Publisher, Global Water Intelligence commented, “The Global Water Awards 2019 celebrated the stories of positive disruption in the water sector in 2018, recognising the pioneers and innovators who pushed the industry to greater heights in the last year. This year’s shortlist represented truly outstanding quality, and to be nominated is an exceptional achievement. We’d like to congratulate this year’s Global Water Awards winners, who exemplify the kinds of positive change and disruption that will continue to drive the international water sector to greater heights in the coming years.”

Global Water Intelligence is proud to announce that the winners of the 2019 Global Water Awards are:

Water Company of the Year

Desalination Company of the Year

Digital Water Company of the Year (Sponsored by ABB)

Public Water Agency of the Year

Desalination Plant of the Year

Water Project of the Year

Wastewater Project of the Year

Industrial Project of the Year

Smart Water Project of the Year

Global Water Intelligence was also thrilled to announce the winners of two in-session awards within the Desalination strand, sponsored by Magna Imperio Systems. During the Water Technology Idol session, the audience voted for the People’s Choice winner, which was also awarded alongside the winner as chosen by the judging panel.

Trophies were also presented to new members of the Leading Utilities of the World network. Membership in this network is a recognition that a utility is among the best in the world, based on relative improvement as much as absolute achievement. The five new members were accepted into the network in a meeting held at The Global Water Summit on 9th April where each presented their achievements to the network’s advisory board – all of whom also represent utilities that have an unimpeachable record of innovation and performance.

The Global Water Awards are voted for by subscribers to GWI Magazine and Water Desalination Report. In addition, Global Water Summit 2019 delegates who registered for the Early Bird Discount were also eligible to vote.

More information on the Global Water Awards can be found at:  www.globalwaterawards.com

The Global Water Summit 2019 in London is the major annual business meeting for the water industry and will offer you a rare opportunity to meet some of the world’s leading thinkers on the future of water. The event is widely known as the leading water industry conference, attracting over 750 executives from across the global water industry.

Global Water Intelligence (GWI) researches and publishes business data and information about water markets worldwide. Based in Oxford, UK it also has offices in China and the USA (Austin, Texas) and has researchers and office staff in many other countries. It publishes multiple subscription titles, two market intelligence platforms (GWI WaterData and DesalData) and a free GWI Briefing email, as well as holding two major financial conferences for the water industry each year: the Global Water Summit in spring and the American Water Summit in autumn. GWI was awarded the Queen’s Award for Enterprise in 2011.