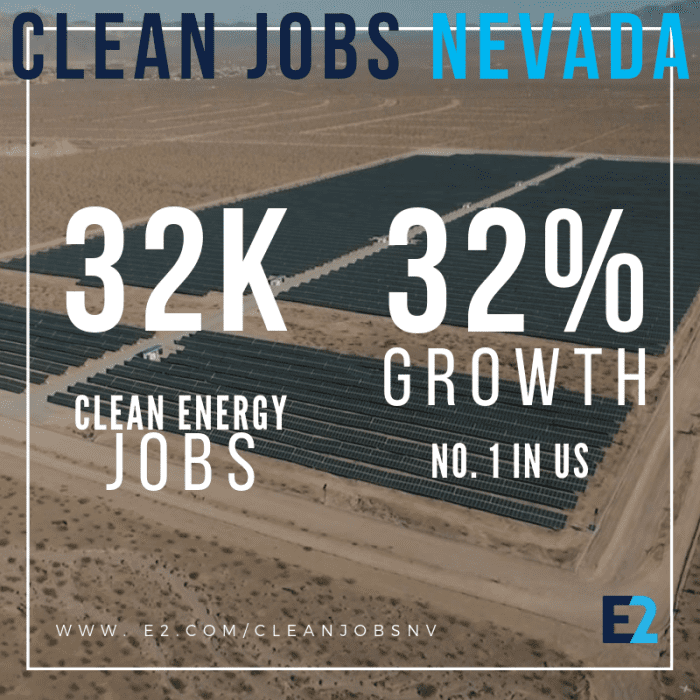 CARSON CITY  – As the Nevada Legislature considers legislation to advance clean energy, including a bill for the state to get half of its energy from renewable sources, a new report shows the importance of clean energy to creating jobs and driving economic growth across the state.

According to the report from the national, nonpartisan business group E2 (Environmental Entrepreneurs), more than 32,000 Nevadans across all 17 counties now work in clean energy. Last year. clean energy jobs grew by a remarkable 32 percent, adding more than 8,000 jobs statewide.

“After some previous setbacks, we’re at an important crossroads for clean energy,” Ledford said. “Gov. Sisolak has made it clear it’s a priority. Now, we just need to make sure we continue moving in the right direction.”

Other highlights from the E2 report:

State lawmakers have opportunities to pass several key policies in 2019 that would encourage clean energy businesses to expand and create more jobs. These include:

To speak with E2 members and other business leaders in Nevada, please contact Michael Timberlake at (202) 289-2407 (mtimberlake@e2.org).

The report follows E2’s Clean Jobs America analysis which found the clean energy jobs account for nearly 3.3 million jobs across all 50 states and the District of Columbia. Both reports expand on data from the 2019 U.S. Energy and Employment Report (USEER) produced by the Energy Futures Initiative (EFI) in partnership with the National Association of State Energy Officials (NASEO), using data collected and analyzed by the BW Research Partnership. E2 is a partner on the USEER, the fourth installment of the energy survey first released by the Department of Energy in 2016. Clean energy jobs have grown every year since the first report was released in 2016.