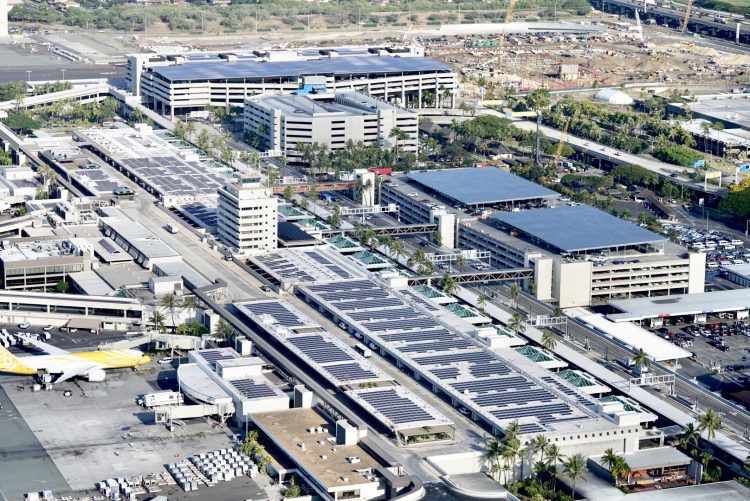 HONOLULU – The Hawaii Department of Transportation (HDOT) is pleased to announce the completion of the installation of 2,980 additional photovoltaic panels on the 5th floor of the Terminal 2 (formerly the Overseas Terminal) garage at the Daniel K. Inouye International Airport (HNL). Construction on the Terminal 2 panels began on Jan. 7, 2019, as part of HDOT’s sustainability and energy savings efforts.

“This is our latest step towards sustainability at Hawaii’s largest airport, which sees more than 20 million passengers a year,” said Gov. David Ige. “Continuing our energy savings efforts at the Daniel K. Inouye International Airport is a significant step toward our state’s 2045 clean energy goal.”

The photovoltaic installation on the Terminal 2 garage is the latest improvement as part of HDOT’s Energy Savings Performance Contract with Johnson Controls Inc. The 20-year contract, which began in 2014, is forecasted to result in $600 million in energy savings for the airports division through the life of the contract and is the largest single state contract of its kind in the nation.

“We are thankful for the patience of the traveling public as we make the improvements outlined in our Energy Savings Performance Contract,” said Hawaii Department of Transportation Director Jade Butay. “The completion of this phase of photovoltaic panel installation, along with the previous improvements, will reduce the airport’s electric bill by nearly half.”

The 5th level of the Terminal 2 parking garage was closed to the public when the installations began in January. As the project progressed, stalls were reopened for public use. As of midnight, March 29, 2019, all 410 stalls are open and available to the public.

The news release announcing the start of the panel installation can be found at:

The news release detailing the installation of more than 4,200 photovoltaic panels on the roof of the Terminal 1 parking garage is available here: