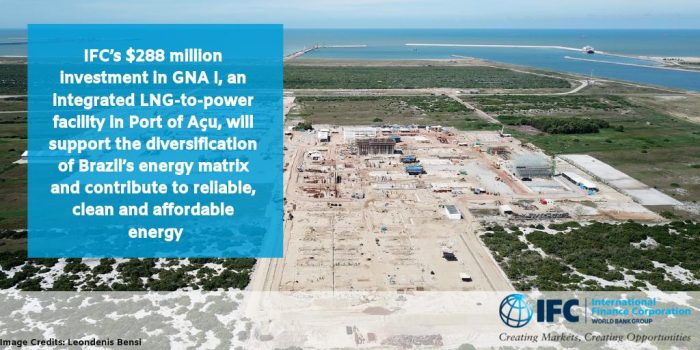 São Paulo — IFC, a member of the World Bank Group, is providing a US$288 million 15-year loan to UTE GNA I Geração de Energia (GNA I) for the development, construction and operation of an integrated liquefied natural gas to power (LNG-to-power) facility in Porto de Açu, in the State of Rio de Janeiro, Brazil. The project is being developed by GNA (Gás Natural Açu), which is a joint venture among Prumo Logística, BP and Siemens, focused on structuring, implementing and operating sustainable energy and gas projects.

The GNA I project, expected to start commercial operation in 2021, consists of an integrated 1.3 GW combined cycle gas turbine (CCGT) based-fired power plant, an LNG import marine terminal, a transmission line, and the expansion of an existing substation.  The plant will be linked to Brazil’s electrical grid, called the National Interconnected System (SIN, for its acronym in Portuguese). The project is part of the largest LNG-to-power complex in Latin America, and is being built by GNA at Port of Açu.

Hydropower plants account for approximately 70 per cent of Brazil’s installed generation capacity, and long droughts in recent years have highlighted the need for a more flexible and reliable mix of energy generation sources. GNA I is designed to dispatch the plant during the dry season and when the system needs it the most, allowing for the replenishment of the hydro reservoirs while promoting further penetration of renewable sources of energy such as solar and wind.

In addition to its role as a highly-efficient and flexible power plant, GNA I is the stepping stone to the first fully-integrated private natural gas hub in Brazil and one of only a few in Latin America. The development of such hub is critical for increasing the competitiveness of Brazil’s natural gas sector, which has recently been opened to private-sector investment.

“Today is a remarkable day for GNA as we celebrate the signing of IFC´s financing to the GNA I TPP. We are building and structuring a transformational project that currently employs 2,500 people, 70% of whom are local residents, and will contribute to the diversification of the Brazilian energy matrix,” says Bernardo Perseke, CEO of GNA. The executive adds: “The support of our stakeholders confirms the relevance of our project to the country and our commitment to sustainable development of the local communities.”

In addition to IFC’s US$ 288 million local currency loan, the financing package of GNA I includes a BRL 1.76 billion (equivalent to approximately US$ 475 million) loan from BNDES, structured in a partnership with KfW IPEX-Bank. KfW IPEX-Bank, in turn, is supported by Euler Hermes Aktiengesellschaft, the German Export Credit Agency.

GNA I is IFC’s third LNG-to-power investment in Latin America, after AES Cólon in Panama, and CELSE’s Port of Sergipe in Brazil. LNG-to-power has been identified as a global strategic aim for IFC in supporting countries to reduce carbon intensity of power grids, favor further penetration of renewables, and diversify generation.

IFC—a sister organization of the World Bank and member of the World Bank Group—is the largest global development institution focused on the private sector in emerging markets. We work with more than 2,000 businesses worldwide, using our capital, expertise, and influence to create markets and opportunities in the toughest areas of the world. In fiscal year 2018, we delivered more than $23 billion in long-term financing for developing countries, leveraging the power of the private sector to end extreme poverty and boost shared prosperity. For more information, visit www.ifc.org

GNA – Gás Natural Açu – is a joint venture formed among Prumo Logística, BP and Siemens, dedicated to the development, implementation and operation of sustainable and structuring energy and gas projects. The company is building, in Porto do Açu, Rio de Janeiro, the largest LNG-to-power complex in Latin America. Currently, the project includes the development of two natural gas-fired thermoelectric plants (GNA I and GNA II), which together, will achieve 3 GW of installed capacity, as well as an LNG regasification terminal.