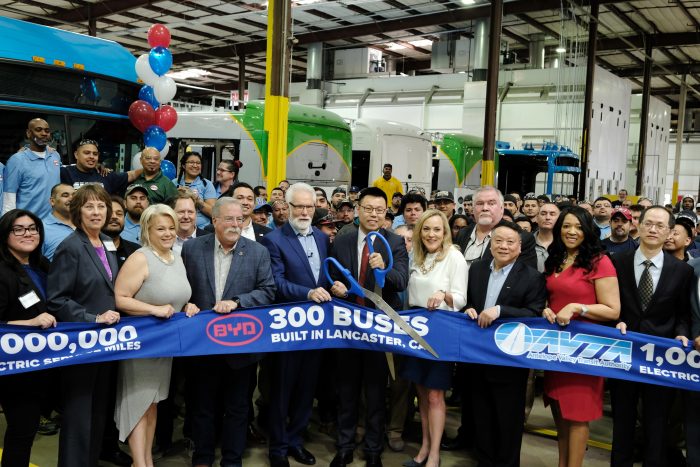 BYD is celebrating the milestone with its highly valued customer and neighbor Antelope Valley Transit Authority. AVTA is closing in on a landmark of its own — 1 million miles of zero-emission bus operations. AVTA expects to make that breakthrough in early May.

The 300th bus is a 35-foot BYD K9S model transit bus. The vehicle is one of three built for Baton Rouge’s Capital Area Transit System (CATS). The agency will field test the use of electric buses in Baton Rouge and study how these battery electric buses could be used on routes in Louisiana’s capital.

“We are very proud of this 300th American bus milestone. We are passionate about our mission to create a cleaner environment here in North America and across the globe,” said Stella Li, BYD President.

Lancaster Mayor R. Rex Parris termed 300th bus “the tip of the iceberg.” BYD has created hundreds of well-paying American jobs with more on the horizon as the company expands its product lines of battery electric buses, trucks and forklifts, the mayor said.

“BYD has continuously shown its dedication to our community and region at-large, since establishing its North American manufacturing facilities here in Lancaster,” Parris. “Along the way, BYD has established itself as the gold standard in the battery electric bus transportation industry. In fact, our local Antelope Valley Transit Authority (AVTA) will very soon have a 100% all-electric bus fleet. There were some skeptics when BYD chose Lancaster as home to its operations. Now, these same skeptics are true believers, as they watch this world-class company continue to literally change the world for the better.”

AVTA was one of BYD’s first customers. In 2016, the AVTA board set a goal of becoming the nation’s first all-electric fleet and vowed to convert all of its aging diesel buses. AVTA will achieve that conversion milestone later this year.

“The Antelope Valley Transit Authority’s fleet of 75 currently includes about 30 electric buses, which will have completed a million miles of travel by the middle of next month. Thus far, approximately 252,000 gallons of diesel fuel has been saved with the new battery electric fleet. This equates to a net savings of $310,000 in fuel costs,” said AVTA Chairman and City of Lancaster Vice Mayor Marvin Crist. “We expect AVTA’s entire fleet to be converted to electric buses as we reach our second million miles, and the savings will be even greater by then – nearly $500,000 in fuel costs saved. Even more impressive, once our full fleet of 75 buses is complete, AVTA will boast 78% better energy efficiency; a carbon footprint reduced by 1.3 million pounds of CO2 annually; and, of course, a continued reduction in air and noise pollution.”

When BYD opened its Lancaster manufacturing plant in 2013, it had a handful of employees working on 10 buses in a 106,000-square-foot building that once housed a motorhome manufacturing facility.

In just six years, BYD has grown to become the largest battery electric bus manufacturer in North America, with more than 750 employees. Since acquiring the facility, BYD has increased its manufacturing plant to over a half million square feet, with the capacity to produce as many as 1,500 buses a year.

In all, BYD has invested more than $250 million in North America, and in 2018 alone, has spent $70 million on components and services from American vendors – many from Southern California.

“We knew our technology could make a real difference here, but we also knew that investing in an emerging North America electric vehicle market was a risk,” Li said.

Since delivery of its first U.S. battery-electric bus in 2014, BYD has provided buses to customers in 13 states and four Canadian provinces.

Li points to AVTA as a model for transit agencies seeking affordable green technology — especially those in California need to comply with state regulations requiring zero-emission fleets by 2040.

From one bus model under production in 2013, BYD’s product line has expanded to include 12 models, the most of any e-bus manufacturer in the market. The transit bus line ranges from 30-foot K7 to the 60-foot K11, and the coach line ranges from 23-foot C6 to the double-deck, 45-foot C10MS.

“Because public transportation accounts for a vast portion of air pollution, BYD strategically moved to first help replace buses and commercial trucks across North America,” said Bobby Hill, BYD’s Vice President Coach and Bus, North America. “And to do so, we wanted to offer multiple zero emission model choices to meet the various demands in the market, and to make the transition as easy as possible.” The company now has more than 50 municipal, transit agency, university, airport, federal and other commercial and private-sector bus customers, including AVTA, Denver RTD, Kansas City International Airport, Solano County Transit, and CARTS.

At any given time, more than 80 buses on the factory floor are in various stages of assembly.

While bus riders are experiencing this comfortable, quieter revolution in transit options, the environment also benefits.

For communities that want to deploy electric buses without the upfront cost, there are leasing options through BYD and its financial partner Generate Capital, a first-of-its-kind partnership.

The Official Sponsor of Mother Nature™, BYD, which stands for Build Your Dreams, is the world’s leading electric vehicle company with proven innovative technology for cars, buses, trucks, forklifts, and rail systems – like SkyRail. BYD is dedicated to creating a truly zero-emission ecosystem offering technology for solar electricity generation, energy storage to save that electricity, and battery electric vehicles powered by that clean energy. BYD has 240,000 employees across the globe, including nearly 1,000 in North America. For more information, please visit www.BYD.com