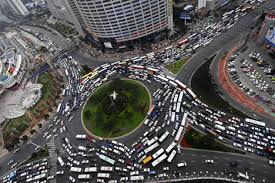 German software maker SAP AG said Wednesday it signed a memorandum of understanding with the Chinese government to fight traffic congestion in the country’s fast-growing cities. As part of the project, now in a pilot phase and expected to come into full swing in the fall, SAP and the Chinese High-Way Group plan a broad collaboration to research integrated solutions for transportation communications and develop intelligent traffic management systems.

Chinese cities are growing rapidly with more than 400 million people expected to be added to the urban population by 2025, making traffic management and planning public transport systems a challenge. The existing IT environment lacks the ability for predictive and advanced data analysis to proactively manage different traffic and transportation scenarios to provide better services to China’s citizens and help better urban planning, SAP said.

The core of SAP’s contribution will be Hana, the company’s super-fast database, which allow analysis of large amounts of data in real time. In China a large amount of transportation data are generated through metro, buses, taxis and traffic cameras, among other sources.

According to the German company, China’s total investment into smart transportation systems has grown continuously to more than 500 million euros ($642.5 million) annually. The company didn’t disclose financial information on the collaboration with the Chinese government.

China is a market that SAP is focusing on for growth. The company invested $2 billion in the 2011-2015 period to provide tailored products in the country.