“Indiana’s fully-funded, long-term Next Level Roads plan means cities, towns, and counties are improving their roads and bridges at levels unmatched in our state’s history,” Gov. Holcomb said. “Community Crossings projects are crucial to first mile and last mile solutions that companies need when evaluating Indiana to locate their business or expand to create additional jobs.”

The Community Crossings Initiative has provided more than $500 million in state matching funds for construction projects. The latest round garnered 229 applications—making the call for projects highly competitive. In response to local requests to help manage project flow, INDOT now accepts applications in both January and July, with a $1 million cap annually per community. An estimated $100 million will be available for communities opting to apply during the 2019 summer call for projects. 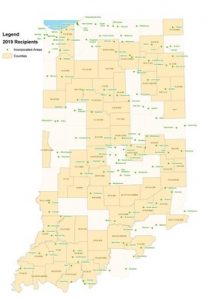 “Local leaders are improving the conditions of local roads and bridges all across the state with funding from the Community Crossings Initiative,” said McGuinness. “The partnership model with the state sharing in the cost of local projects means Hoosier taxpayers receive great value as communities deliver needed projects.”

To qualify for funding, local governments must provide local matching funds, 50 percent for larger communities or 25 percent for smaller communities, from a funding source approved for road and bridge construction. They must also submit an INDOT-approved asset management plan for maintaining existing roads and bridges. State law requires annually that 50 percent of the available matching funds be awarded to communities within counties with a population of 50,000 or fewer. State lawmakers identified long-term funding for Community Crossings as part of House Enrolled Act 1002, passed by the legislature and signed into law by Gov. Holcomb in April 2017.

The list of all communities receiving matching funds in the 2019 winter call for projects is online at www.in.gov/indot/communitycrossings.

About Next Level Roads
“In Indiana, the Crossroads of America is more than a motto; it’s our mission.”
– Governor Eric Holcomb

Next Level Roads is Governor Eric J. Holcomb’s initiative to elevate Indiana’s economic competitiveness and quality of life for all Hoosiers through investment in transportation infrastructure. This sustainable, data-driven plan dedicates more than $30 billion over the next 20 years to improving the conditions of existing roads and bridges – both state and local, finishing major projects, and building for the future. Next Level Roads is enhancing Indiana’s position as a leader in freight and logistics and empowering cities, towns and counties to build communities that attract jobs and talent. Learn more about Next Level Roads at in.gov/indot.

About the Indiana Department of Transportation
INDOT empowers businesses to deliver Indiana to the world and bring the world to Indiana by providing a transportation network that is second to none. The agency builds and maintains more than 28,000 lane miles of highway and 5,600 bridges, and provides oversight for 117 public aviation facilities and more than 4,000 miles of active rail lines. Indiana ranked as the #1 state in the U.S. for infrastructure in CNBC’s 2016 “Top States for Business” ranking. Learn more about INDOT at in.gov/indot.