Engineered Solutions: How to Maximize Usefulness of Joist Girder Panels 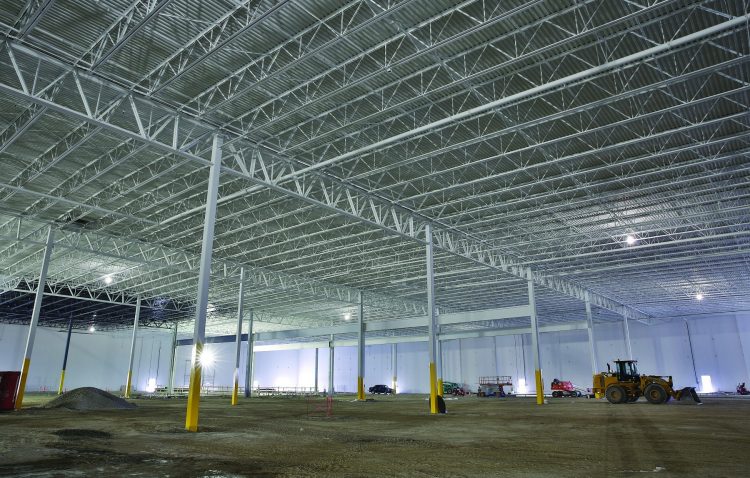 Joist Girders are so common as to be almost invisible. They are the primary structural framing members of myriad projects big and small, public and private, and just about any other building category conceivable. Schools, museums, churches, libraries, big-box retail, industrial facilities, manufacturing plants, sports complexes, hospitals, gymnasiums, warehouses, and more prominently feature Joist Girders. That’s not a coincidence.

The job of Joist Girders is straightforward: They support secondary framing members such as standard steel joists, floor and roof systems, and other concentrated loads. The girders themselves are supported by columns, walls, or beams.

But just because Joist Girders are so common and their primary mission so elementary doesn’t mean their consideration, selection, and role in construction is similarly simple. When used in projects that must keep ceiling height in mind and accommodate mechanical, electrical, and plumbing (MEP) systems as they support concentrated loads, Joist Girders need to be carefully specified and fabricated.

The concentrated loads on Joist Girders are normally considered to act at the top chord panel points of the girders. Depending on design requirements, Joist Girders can be designated to support those loads at different panel points (Figure 1).

The Specifying Professional specifies the joist locations and Joist Girder loading on the contract structural drawings. Unless a particular panel configuration is specified, the joist manufacturer will optimize the Joist Girder panels to achieve the most cost-efficient design based on the specified design criteria.

Early coordination between the engineer of record (EOR) and joist manufacturer is crucial to a smooth design process and being in position to address issues that might arise, notes Kurt Voigt, Engineering Manager at New Millennium Building Systems.

“It is helpful if the EOR works with a joist manufacturer prior to bid drawings being released when special situations or conditions involving Joist Girders are present in order to get the Joist Girder designs and requirements as realistic as possible from the beginning,” Voigt says.

A “DG” designation (i.e., 32DG5N10K) is sometimes specified in order to more easily integrate MEPs and other passthroughs. With no vertical web in the way at joist locations, it is much easier to run continuous light tracks (or similar features) beneath the joist bottom chords across the Joist Girder. Since girder end-panel configurations may interfere with passage of services near the ends of the girder, it is recommended to specify which joist lines may be used for these services.

In other cases, a “VG” designation (Figure 1) is used to maximize web-opening size for mechanical ducts running parallel to and between joists. This configuration keeps vertical webs and joists out of the way, creating a larger duct opening in the triangle formed by the bottom chord and adjacent diagonal webs. Duct opening size requirements should always be coordinated with the joist manufacturer. However, as a general rule of thumb, a typical “VG” Joist Girder can usually accommodate a maximum duct-opening diameter of

The “VG” panel layout usually results in a less efficient use of steel because every vertical web becomes a primary load-bearing member with substantially higher strength demands than simply bracing the Joist Girder top chord. But that additional cost can be minimal compared to savings associated with being able to run larger ducts through the Joist Girder web openings. As with the “DG” designation, girder end-panel configurations may interfere with passage of services near the Joist Girder ends.

The old adage for Joist Girders that “deeper is cheaper” tends to hold true when minimizing Joist Girder chord sizes. For this reason, Joist Girders often are specified with depths up to 1/12th of the span (40” deep Joist Girder for 40-foot span for example). Deeper Joist Girders also allow for larger duct openings, as long as they do not exceed 60% of the joist spacing.

It can become a balancing act to space joists to maximize deck span strength, select a Joist Girder depth for efficient chord sizes, and also maintain a Joist Girder-depth-to-joist-spacing ratio compatible with a “DG” or “VG” configuration. It is a balancing act well worth performing in many cases. Attention to these details gives the Specifying Professional more control over the Joist Girder panel layout, thereby maximizing potential advantages of the open-web steel joist and Joist Girder system.