/ Articles / After the Wildfire: Soil Stabilization Key to Recovery Efforts

After the Wildfire: Soil Stabilization Key to Recovery Efforts 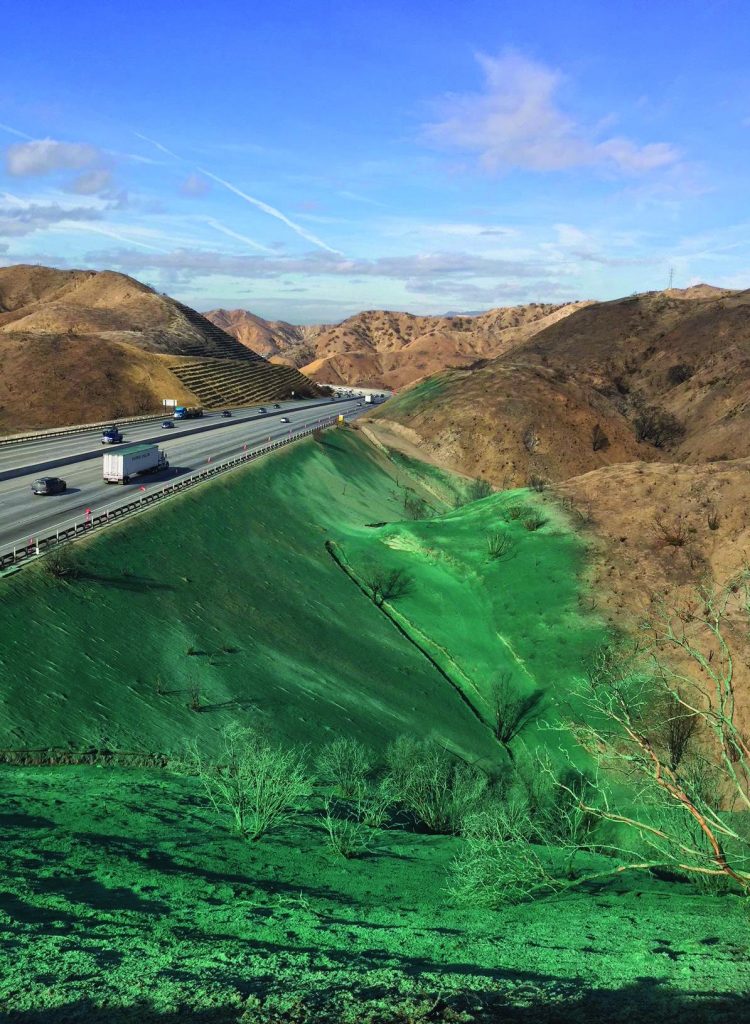 Fiber-reinforced matrix products are designed to give seed a stable growth medium on particularly steep slopes. Hydromulch was used on hillsides in the Verdugo Mountains in Los Angeles following the La Tuna Fire, which started Sept. 1, 2017, and burned 7,194 acres. It was the city’s largest wildfire in 50 years.

Soil erosion is a common concern after a wildfire—just ask Logan Moore, a landscape associate with the California Department of Transportation (Caltrans) North Region. Moore works for the Caltrans Office of Landscape Architecture, the go-to source for erosion control when wildfires occur.

“On a typical project, our designs happen well before the disturbance occurs,” relates Moore. “But wildfire situations instantly become an emergency. Sometimes we’re contacted even before a fire stops burning to determine the best alternative to stabilize the soil. Our goal is to create soil stabilization through the materials we apply to promote seed germination.”

Moore was particularly busy in 2018, as last year’s wildfire season was the deadliest and most destructive on record in California. According to the California Department of Forestry and Fire Protection, 8,527 fires burned an area of approximately 1.9 million acres in the state, the largest amount of burned acreage recorded in a season. The fires caused more than $3.5 billion in damages, including $1.8 billion in fire-suppression costs.

Included in these statistics is a wave of devastating wildfires that swept across California in November 2018. In Northern California, the Camp Fire became the deadliest fire in the state’s history, burning nearly 154,000 acres, destroying more than 18,000 structures (mostly homes) and causing at least 85 civilian fatalities. In Southern California, the Woolsey Fire in Malibu/Los Angeles burned nearly 97,000 acres and destroyed more than 1,600 structures, killed three people and prompted the evacuation of nearly 300,000 residents.

Many factors led to the 2018 California wildfire season becoming so destructive, including an increased amount of natural fuel and compounding atmospheric conditions linked to global warming. According to the University of California, Berkeley’s Center for Catastrophic Risk Management, the state’s wildfires are expected to increase in frequency and intensity through increases in temperature and changes in precipitation.

Post-fire erosion depends on many factors, but erosion hazard typically increases as slope increases and vegetative cover decreases. As a fire burns, it destroys a forest’s plant material and litter layer, which consists of undecayed to mostly decayed organic matter (usually leaves) that are broken down into soil by decomposers such as microorganisms and insects as well as exposure to light, wind and rain.

Shrubs, grasses, trees and the litter layer break up the intensity of severe rainstorms, as plant roots stabilize the soil, and stems and leaves slow the water to give it time to percolate into the soil profile. Wildfires can destroy this protection, creating conditions ripe for flash flooding and mudflow.

High-intensity fires can even create water-repellent soil conditions, a phenomenon called hydrophobicity. This condition increases the rate of water runoff, as it reduces water percolation into the soil profile and makes it difficult for seeds to germinate as well as for the roots of surviving plants to obtain moisture.

“Anytime we’re dealing with issues such as hydrophobicity, we have to be particularly careful,” says Moore. “If the soil is hydrophobic, there’s a severe potential for slides.”

Many of California’s recent fires have occurred in the fall, giving Moore and his colleagues little time to generate erosion-control specifications and stabilize slopes before the state’s rainy season begins—typically in October or November. In many instances, a wildfire site will recover on its own with minimal erosion. In other places, some erosion-control treatments may be needed, particularly if streams, roads or buildings are directly downslope from the burned area.

Hydroseeding is frequently used to reseed grass in severely burned areas because it’s effective and easy to apply. The process basically involves using a hose to spray a special mixture onto an area of land, rather than tilling and seeding the old-fashioned way. That special mixture most often consists of water, seeds, fertilizer, cellulose fiber or wood mulch, and soil-treatment agents. When sprayed onto the ground, the mulch in the mixture forms a moist protective coating for the seeds, allowing them to germinate. For large areas, the slurry is kept in a trailer or tank and is sprayed in an even layer.

“It’s kind of like making a smoothie,” relates Brian Free, market development manager for Profile Products, a supplier of erosion-control products. “There are a variety of products that can be added to the mix depending on the ground conditions.” 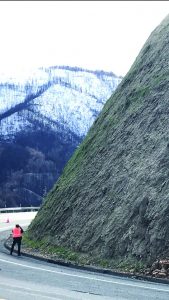 The Carr Fire burned 229,651 acres and 1,604 structures in California’s Shasta and Trinity counties before it was fully contained on Aug. 30, 2018. Slopes were biologically restored with hydraulic biotic growth medium and covered with a fiberreinforced hydromulch, allowing vegetation to reestablish after seeding in late-fall 2018.

Moore weighs several variables to determine the best mix, including the burn’s severity, slope steepness, soil type, and the amount and duration of expected rainfall. He typically gives contractors mixture specifications from one post mile to another based on how hot and where a fire burns.

“Some places look like a moonscape, whereas other areas still have a little bit of green vegetation,” notes Moore. “The grass in the soil may have burned, but you still have shrubs and trees that are still somewhat healthy. In those cases, we may reduce the native seed mix because some of the seeds in the ground in the burn area are still viable. If the fire burns hot enough to destroy all living bacteria in the soil, then we’ll put down a biotic growth medium to return nutrients to the soil. If the soil is hydrophobic, we can add a product to help penetrate it.”

Steep slopes require high-performing mulch products to give seed a stable growth medium. According to Free, base hydro mulches—such as straw or paper-based products—are available for slopes 3:1 or less, but slopes around 2:1 require a bonded-fiber matrix product. Such products are about 95 percent effective at controlling erosion and last up to 12 months. Any slope steeper than 2:1 requires a fiber-reinforced matrix, a unique class of hydroseeding erosion-control product comprised of a continuous layer of elongated fiber strands held together by a bonding agent that resists the impact of rainfall. Such products provide about 99 percent erosion-control effectiveness and last up to 18 months.

“When the slopes are steep, we really like to use a fiber-reinforced matrix for longevity and flexibility,” says Moore. “Flexibility is key, because the the product shouldn’t break or crack, as that will disrupt root growth. Longevity means the product needs to last. With some fires, it takes a while for the soil to regain its structure, so we need the mulch to last at least through the first winter and into the spring to get some seed germination. Then when the storms come through the next winter, we can count on the soil being stable enough to prevent a slide.” 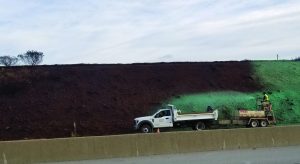 Hydraulic biotic growth medium (dark portion) returns nutrients to the soil that were destroyed by extremely hot fires. Here the medium is laid down with the seed to ensure good seedto-soil contact and covered with fiber-reinforced matrix hydromulch (green portion)

According to Free, a typical hydraulic mulch installation entails putting down the soil-building components first with the seed to ensure good seed-to-soil contact. After that layer dries, typically within 24 hours, it’s capped with about 3,500 to 4,500 pounds per acre of whatever erosion-control product is specified. A fiber-reinforced matrix cures much faster than a bonded-fiber matrix, which is an advantage if rainy weather is in the forecast.

The mulch and moisture shelter the seeds from sunlight, wind and soil erosion. As the mixture goes through its natural decomposition process, it releases a wide range of nutrients that help the seeds thrive. The mulch doesn’t have to be manually removed because it just blends down into the emerging vegetation.

“The key to establishing sustainable vegetation entails proper planning and execution,” says Free. “Having the correct foundation in place from the start makes all the other choices required that much easier and effective.”

He suggests a five-step approach to ensure project success:

1. Assess and Create Optimal Soil Conditions. Soil testing provides essential information to determine what adjustments, if any, need to be made to ensure a more favorable growing environment for faster, more complete vegetative growth and sustainable establishment.

3. Select the Correct Erosion-Control Material. The right cover is necessary to protect the seed and soil, considering the erosion-control product’s effectiveness, ability to facilitate growth, and the functional longevity required for that protection.

4. Ensure Proper Installation. Erosion-control products need to be installed in accordance with the manufacturer’s mixing and application guidelines to maximize their performance and meet project requirements.

5. Perform Follow-up Inspections. Continually monitoring how projects progress is the best way to make sure all site requirements and compliance issues are being addressed. Maintenance may be required to mitigate unexpected challenges.

“You definitely want to do these types of jobs right or you run the risk of a slope failing and taking out a highway or a stream below it,” warns Free. “Sometimes there are high consequences for failure.”

Comments are disabled
NEXT ARTICLE
Video: What Is Infrastructure?
May 2, 2019
PREVIOUS ARTICLE
Thoughts From Engineers: The Hidden Monster That’s Our Failing Water Infrastructure
May 2, 2019