The International Tunnelling And Underground Space Association Calls For Entries 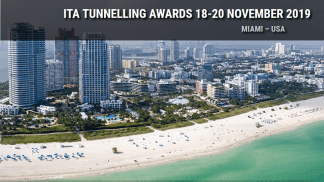 Since 2015, the international competition “the ITA Tunnelling and Underground Space Awards” seeks and rewards the most ground-breaking innovation and outstanding projects in tunnelling and underground space utilization. The next edition (5th) of the ITA Tunnelling Awards is an important moment for the global tunnelling activity. Organised by the International Tunnelling and Underground Space Association, the event will take place in Miami, USA in conjunction with the 8th edition of “Cutting Edge Conference” organised by the Underground Construction Association of the Society for Mining, Metallurgy & Exploration (UCA of SME).

THE ITA IS CALLING FOR ENTRIES/PROJECTS

The ITA is now calling potential candidates to submit their entries in 8 different categories from technical innovation to major achievement. Entries can register for applications until 15 June 2019.

After a first selection by the panel of judges, a shortlist will be announced mid-July and the winner will be revealed on 18 November during the Awards Ceremony.

All the key players of this worldwide industry are invited to put an entry for small or large projects, in new construction or renovation as well as initiative in terms of new technologies or innovative underground space use. As before a young tunneller (below 35) will also be rewarded.

Since 2015, 4 editions have been successfully launched by the ITA in Hagerbach (Switzerland); Singapore; Paris (France) and Chuzhou (China).

Last year in China, projects from Asia, Middle East and Europe have been rewarded and notably the Immersed Tunnel of the Hong Kong-Zhuhai-Macao Bridge Link which won the Major Project of the Year Category (over €500M).

ABOUT THE 8TH CUTTING EDGE ADVANCE IN TUNNELLING CONFERENCE

Presenters and conference attendees will engage an in-depth dialogue on the latest advances in tunnelling technology and methodology, and will look at how they can be harnessed to assist the industry’s major upcoming underground projects.

Nominations for categories of ITA Tunnelling and Underground Space Awards must be projects for which the major civil engineering works have been completed between 1st January 2017 and 1st April 2019. (Major Civil work includes the underground excavation and support of tunnels, caverns and cut and cover structures as applicable to the project).

Entries can be submitted for applications on the ITA Tunnelling Awards website:

The International Tunnelling and Underground Space Association (ITA) is a non -profit and non-governmental international organization, which aims at promoting the use of underground space as a solution to sustainable development. Founded in 1974 and operating out of Geneva, Switzerland, ITA currently has 75 Member Nations, 300 affiliated members, 17 Prime Sponsors and 60 supporters.