Heat Transfer on a Disk: A Closed-Form Solution for Suspension Bridge’s Main Cables Exposed to Fire 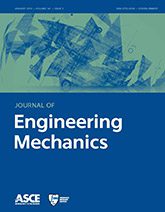 Despite the danger of collapse that fire poses to a suspension bridge, it has been an understudied area of bridge engineering. A new study in the Journal of Engineering Mechanics shows you how to calculate the potential effects of heat transfer on a suspension bridge’s main cables. Get the formula free for a limited time from the ASCE Library.

The heat transfer problem is often considered to be the kernel of a fire resistance analysis. In fact, one- or two-dimensional closed-form solutions have long laid the foundation for an engineer’s understanding of the temperature distribution within a structural element exposed to fire. Although many closed-form solutions of the thermal problems for structural members in buildings exist, the literature is surprisingly thin for bridge structures—and even more so for suspension bridge structures. This paper addresses that sparsity by presenting a generalized approach for the formulation and solution of the heat transfer problem for a suspension bridge main cable exposed—either partially or completely—to fire. The approach first normalizes and then nondimensionalizes the problem. It then divides the resulting generalized time-dependent heat equation with spatially dependent boundary conditions into a steady-state and transient problem and subsequently solves each piece with a classic separation of variables technique. The functionality of the solution is assessed by performing both an error analysis and a computational time comparison with numerical results for three verification problems.

The increased ground transport of hazardous and highly flammable materials has led to an increase in the likelihood of fire damage to the ground infrastructure network (Garlock et al. 2012). In fact, Battelle (2004) revealed that “the average number of annual vehicular fire incidents in the United States is 376,000 causing 570 civilian deaths and $1.28 billion in property loss.” In 2008, a New York State Department of Transportation (NYSDoT) survey of bridge failures conducted in 18 states (including seismic states such as California) found that, of 1,746 bridge failures, 52 collapses resulted from fire incidents, whereas just 19 collapses resulted from earthquakes. As such, bridge fires, and particularly those that occur on suspension bridges—often seen as the crown jewel of the ground infrastructure system for their role in providing mechanisms to cross deep valleys, large waterways, or other natural restrictions—are a direct threat to economies, commerce, and human life alike. Yet despite the shocking numbers associated with such a threat, fires remain an understudied and undercodified area of bridge engineering.