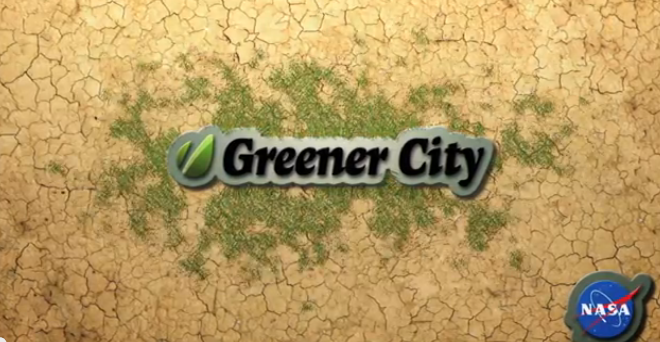 Students at the Software Engineering and Management bachelor program at University of Gothenburg, were appointed winners of NASA’s Space Apps Challenge in Gothenburg in April. Their concept of “Greener Cities” will now be judged by an international jury.

The International Space Apps Challenge attracted over 9,000 participants in 75 locations in 50 countries on 20-21 April. On Campus Lindholmen in Gothenburg more than 100 people gathered for a weekend dedicated to problem solving, programming and creativity.

The purpose of the NASA-staged the event – which was organized for the second time – was to develop solutions to challenges within well specified areas such as robotics, geographic analysis, meteorology, visualization, 3D technology and wireless communication. All solutions were submitted as open source, and are now available to solve global social problems.13 teams were formed and took on the task of developing their concepts during an intense weekend. Nico Boh, Patrik Bäckström and James Omoya teamed up with Allen Smith from Ericsson and Marcus Hedenström from Wireless Car, decided on the challenge “Smart Cities, Smart Climate” and proceeded into a two-three hour long brainstorming session that led to the concept of “Greener Cities”.

The work over the weekend continued with developing a prototype to demonstrate the vision. Primarily for the jury, but the group went to work with the aim of a concept that could, in the longer term, be presented to the public.
– So basically what we came up with is a garden monitoring sensor, that can do a lot of things. It can monitor your plants and tell you if they need water, and it registers the quality of the air around your garden, says James Omoya.

“Street view” of the air quality
Data from the sensors that people keep in their garden will be crowd sourced in order to provide a holistic picture of, for example, the air quality throughout Gothenburg. The group also sees that it would be possible to to mount sensors on buses and trams, to collect information about for example the emission along the routes.
– The idea is that the city itself has an urge to be as climate friendly as possible, it doesn’t have to be each individual, says Patrik Bäckström.

One of the objectives is to offer a “street view” over the air quality in the absolute vicinity. Areas with low emissions are indicated by green circles, and areas with poor air quality are highlighted in red.
– Environmental data today is available for countries, or maybe bigger cities, but you will never get it for certain areas, neighborhoods or even streets. Our idea is to say “wouldn’t it be nice to see how the air quality of your neighborhood is”, says Nico Boh.

Fuglesang and Coquand in the jury
The concept appealed to the local jury, which featured names such as Swedish astronaut Christer Fuglesang, Olle Norberg, chairman of the Swedish National Sapceboard and former CSE Head of Department Catarina Coquand, and “Greener Cities” was selected for global judging. An international jury will select the four best entries in the world. There will also be a public vote on the website spaceappschallenge.org – the winner of the vote will receive a special “public award”.

For the international assessment, the winning team from Gothenburg has produced a two-minute video presentation.
– We are delighted to be part of the competition. It has been a great experience, but really, it’s not so much about competing. The basic idea behind the challenge is to get as many people as possible from as many different countries as possible to come together and develop something great together. It’s about collaboration, says James Omoya.

Comments are disabled
NEXT ARTICLE
Hitting the Point: A Simple Guideline for Contracting 3D Mapping Professionals
May 24, 2013
PREVIOUS ARTICLE
Miami-Dade Commissioners Approve $1.6 billion to Fix Water and Sewer Pipes
May 23, 2013