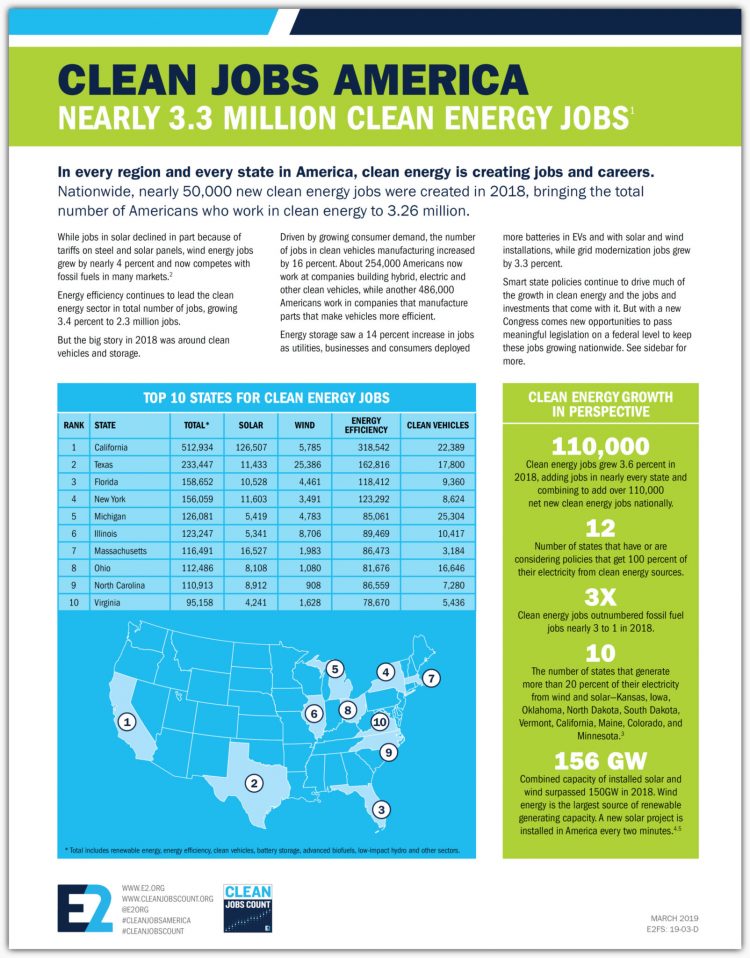 Washington, DC  – Nearly 3.3 million Americans now work in clean energy in every state in the country, according to a new analysis of energy jobs data by the national nonpartisan business group E2 (Environmental Entrepreneurs). Across the country, nearly every state saw an increase in clean energy jobs in 2018, combining to add about 110,000 net new jobs for a growth rate of 3.6 percent.

Overall, clean energy jobs totaled more than 3.26 million at the end of 2018, growing despite the impact of the Trump administration’s tariffs on solar panels and market uncertainty from the administration’s inaction and planned rollbacks of energy efficiency and clean vehicles policies. Clean jobs outnumber fossil fuels jobs nearly three to one (3.26M to 1.17M) and clean energy employers said they anticipate 6 percent job growth for 2019.

“Clean energy jobs continued to grow across the country in 2018. But this growth is in jeopardy because of misguided Trump policies such as tariffs on solar panels and rollbacks of popular fuel economy and energy efficiency standards,” said Bob Keefe, E2 executive director. “The 3.3 million Americans who now work in clean energy industries – and all of us – are counting on Congress to take action that helps this giant sector continue to expand our economy. America’s ability to lead the world in innovation and compete globally in this booming market depends on it.”

The analysis expands on data from the 2019 U.S. Energy and Employment Report (USEER) released last week by the National Association of State Energy Officials (NASEO) and Energy Futures Initiative (EFI). E2 is a partner on the USEER, the fourth installment of the energy survey first released by the Department of Energy in 2016 and subsequently abandoned under the Trump administration. Clean energy jobs have grown every year since the first report was released in 2016.

Solar jobs decreased for the second year in a row, falling by nearly 15,000 in 2018, while wind energy jobs grew by 3.5 percent. About 90 percent of solar job losses occurred in California and Massachusetts, while 18 other states saw growth. Solar remains the top U.S. job provider in electric power generation—leading natural gas by more than 200,000 jobs —while wind is third, trailing natural gas by fewer than 1,500 jobs.

Traditionally strong clean energy states dominated the job rankings again in 2018, with nine states now topping the 110,000-job mark for clean energy employment. States outside the top 10, including Kansas, Pennsylvania, Oklahoma, and Kentucky, saw growth rates above 5 percent while Nevada experienced a meteoric 32.43 percent growth in jobs in large part because of growth in battery-storage jobs related to Tesla’s Gigafactory.

E2 will hold a webinar (open to media) on March 20 to discuss the detailed findings of the 2019 Clean Jobs America report and the just-released 2019 US Energy Employment Report (USEER).Speakers include USEER co-authors, energy efficiency experts and E2 staff – and will include discussion of pending state and federal policies that will impact the clean energy industry and jobs. Contact Michael Timberlake (mtimberlake@e2.org) if you would like to attend or for a recording of the discussion.

To speak with E2 members and business leaders who support strong investments in clean energy and their impact on America’s economy, please contact Michael Timberlake at (202) 289-2407.

More information about E2’s clean energy jobs research can be found at www.e2.org/reports.