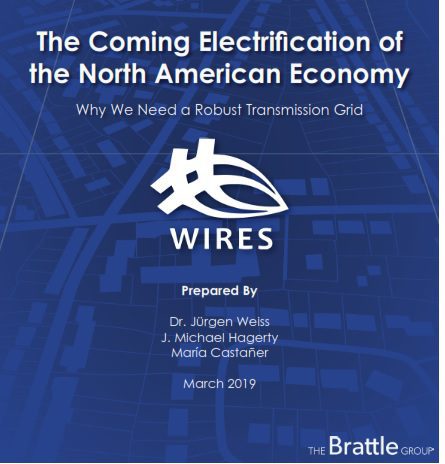 WASHINGTON – A newly released report by WIRES finds that the drive towards electrification of transportation and heating in the U.S. will require major new electric transmission infrastructure. The report, titled The Coming Electrification of the North American Economy: Why We Need A Robust Transmission Grid, projects that investments totaling $30-to-$90 billion will be needed by 2030, and significantly more than that by 2050.

According to the report, the number of electric vehicles on the road and other electricity used are slated to increase exponentially, placing stress on the existing grid. The Brattle Group in conjunction with WIRES, projects that Electric Vehicles (EVs) will jump from one million today to seven million by 2025 and increase exponentially from there. The study found that electrification of the transportation, heating, and data application sectors could significantly increase electricity demand and the need for low-carbon and renewable electric generation resources.  A more robust transmission infrastructure would therefore be necessary to support this fundamentally different energy economy.

Vehicle manufacturers have already announced more than 60 new electric light-duty models, released several electric commercial vans, and begun to develop electric pick-up and semi-trucks that may be available in the early 2020s. Some have even declared their intent to completely phase out the production of internal combustion engines.

A similar trend is occurring in the space heating sector. Electric heat pumps, which already are common in regions of the U.S. with moderate climates, are also becoming less expensive and more efficient in colder climates. Advances in technology could even make it increasingly possible to electrify many industrial processes.

“The writing on the wall is clear; we’re headed toward a cleaner energy future. The transportation and heating sectors will be electrified — it’s just a matter of when,” said Brian Gemmell, President of WIRES Group and Vice President of Transmission and Asset Management with National Grid. “Transmission is the enabler of our electrified energy future, so we need to start planning now in order to keep pace with the coming increased demand and to ensure continued reliability of the US electric system.”

The report examined transmission investment needs based on two scenarios:

Using these two scenarios as guideposts, and depending on the pace of adoption of electrification, the study forecasts the need for $30-$90 billion in incremental investment in new transmission infrastructure by 2030 to connect all of the new generation resources and to maintain reliability. When the forecast advances to 2050, the required transmission investment increases to an additional $200-$600 billion.

The report, prepared for WIRES by the Brattle Group, provides these critical takeaways for policymakers:

“The findings in this report are great news for electricity consumers. While the size of potential transmission investment is remarkable, the amount that customers pay for transmission services, and probably for delivered electricity overall will remain low,” said James Hoecker, executive director of WIRES. “That’s because the transmission costs are a public investment spread over all customers and will be offset more efficient markets and by wider deployment of lower-cost renewable energy resources. The report shows that, if we are smart, the next 25 years will be a great leap forward.”

The report also examines the potential for the existing transmission system to cost-effectively facilitate the development of a network of highway corridor and urban fast vehicle charging stations that could help speed the adoption of electric vehicles.