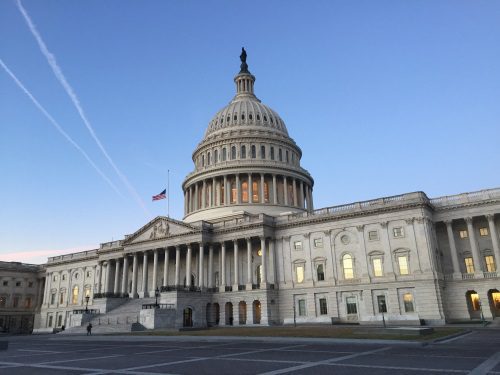 A vehicle miles traveled or VMT fee, wider use of tolling, and a hike in the federal fuel tax were some of the many transportation funding options four key Congressional leaders discussed at the American Association of State Highway and Transportation Officials 2019 Washington Briefing, held annually in the nation’s capital at the Washington Court Hotel.

Rep. Sam Graves, R-Mo., and the ranking member on the House Transportation and Infrastructure Committee stressed that there is “a lot of support” to get an infrastructure bill done this year.

“Everybody wants to get something done – the House, the Senate, the President, Democrats and Republicans,” he said. “The hard part will be figuring out how to pay for it — will this just be a straight [Fixing American’s Surface Transportation] reauthorization bill or a much broader infrastructure bill? Hopefully it will fall somewhere in between.”

Rep. Graves stressed that Rep. Peter DeFazio, D-Ore., chairman of the House T&I Committee, has set “an aggressive schedule” to get transportation infrastructure funding bill done this year, with a deadline on May to get a bill delivered out of the committee.

“In terms of how we pay for it, everything is on the table: from tolling, which I am not a fan of, to changing over to a VMT which I am,” he said. “In my opinion, we’ll need to spend a lot of political capital to get it done – and raising the gas tax will be tough. We’ve never indexed the gas tax [to inflation] and that’s one of the biggest problems we have [because] the reality of politics makes raising taxes very hard.”

But Rep. Graves emphasizes that “the fact of the matter is we have to do something eventually” in terms of replacing the federal fuel tax with another “revenue generation tool” particularly as more movement to more efficient internal combustion engines that use less fuel alongside the movement away from fossil fuels altogether as more electric, natural gas, and propane vehicles are deployed.

[View the full remarks of Rep. Graves in the video below.]

Sen. John Barrasso, R-Wyo., and chairman of the Senate Environment and Public Works Committee echoed Rep. Graves’ point about the impact of declining fuel tax revenue on the nation’s transportation infrastructure, noting that the Highway Trust Fund is projected to become insolvent in 2021.

But Sen. Barrasso also highlighted the importance of two other issues related to solving transportation funding needs in the future.

“We need to maintain reliable formula funding; it’s what protects long-term planning so we can build [transportation infrastructure] better, faster, cheaper, and smarter,” he explained.

“That money needs to be used as efficiently and effectively as possible and part of the way we can do it is by cutting red tape,” Sen. Barrasso added. “As states, cities, and and towns wait to get approvals from Washington, precious time is wasted. It should not take years to get permits for projects. We need to speed up project delivery. And this it is not a Democrat or Republican issue – it is an American issue.”

[View the full remarks of Sen. Barrasso in the video below.]

Rep. DeFazio also stressed the “bipartisan nature” of transportation funding and said restoring earmarks would be one way to build on that sentiment in Congress.

“Funding infrastructure is by its nature a jobs program, plus a huge boost for our economy and international competitiveness – so I can’t understand why we can’t get it done. It’s a win for all Americans,” he explained. “The American people get it – the gas tax is a user fee. And they are willing to pay a user fee [because] they are tired of congestion, tired of blowing out wheels in pot holes, and transit systems that don’t work.”

To that end, he believes bringing back earmarks would help legislatures connect such taxes more directly with transportation improvements.

“Why does an unelected bureaucrat get to decide who gets [transportation] grant money? Why not allow elected representatives to bring some of that back to their districts to show their constituents what they are getting for their gas taxes. I think this is key to getting this done – and I aim to bring back earmarks.”

In terms of future sources of transportation funding, Rep. DeFazio said he supports exploring the use of a VMT fee. However, he said that a flat VMT is not fair to everyone using the roadways. “Is it fair to pay the same per-mile on a congested highway versus a farmer on a rural road? That means we have to go to congestion pricing in some form,” Rep. DeFazio said.

He added that when his committee draws up an infrastructure bill it will have a national VMT pilot program included within it. “This is something Sam (Rep. Graves) and I agree on,” Rep. DeFazio noted. “It will be easier to do that for commercial vehicles, maybe move to a weight/mile tax. I think there is some promise there.”

[View the full remarks of Rep. DeFazio in the video below.]

Sen. Tom Carper, D-Del., the ranking member on the Senate’s EPW Committee, agreed with Rep. DeFazio’s points regarding both the establishment of a national VMT pilot program and the re-establishment of earmarks for transportation funds.

“What I envision is combining road user charge with [the all-electronic] EZ pass to help fund transportation around the country,” he said. “And earmarks are important for it is hard to convince a legislator to raise user fees without a way of showing benefits to their state.”

[View the full remarks of Sen. Carper in the video below.]

Sen. Carper added that one of his “favorite songs” is “Hope in a Hopeless World” and he feels that might serve as a guiding mantra where transportation funding is concerned.

“We spent $13 billion last year above what the [highway] transportation fund provided; that is not sustainable,” Sen. Carper pointed out. “Yet we still aren’t spending enough; we need $800 billion worth of infrastructure investments by some estimates to get us where we need to be. As a result, we don’t have a national transportation system that functions as it ought to.”