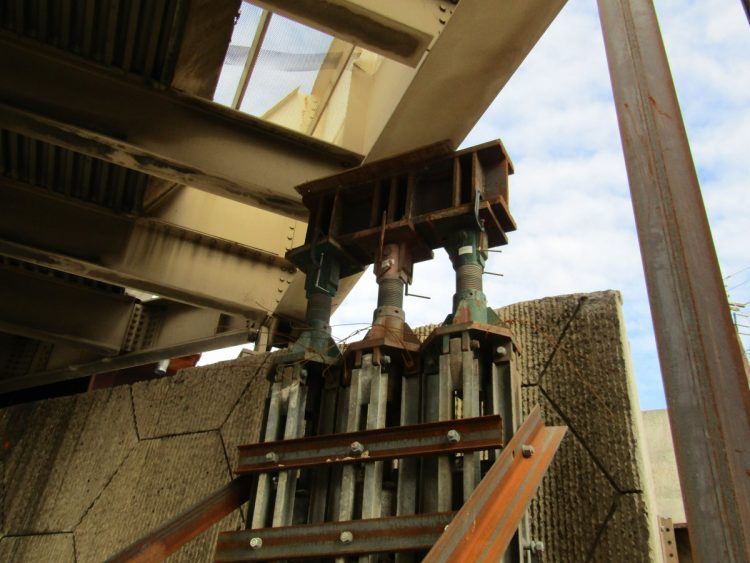 Rapidly increasing population growth in the area has made the major artery one of the most congested in the region, and the widening project called for adding two new lanes in each direction to the outside of the existing roadway. At some locations, this required lengthening overpasses, and in this case, the overpass was a Kansas City Southern Railway bridge. Plans were made to extend the bridge with additional spans at each end, which necessitated specialty shoring of the plate girder bridge to support both the heavy freight loads on top and to protect the traffic below as the contractor excavated around the old abutments which would be modified to become the piers to connect to the new end spans.

Due to the extremely tight footprint between the traffic on U.S. 75 and the bridge abutments, there was no room for cranes to install cribbing. Acrow’s Superprop® shores proved an excellent solution as they require only a small staging area, are easy to install and have adjustable screw crowns. Three supports were installed at each corner to hold up the more than 1 million pounds per corner of estimated load carried by the freight traffic on the bridge. A single Superprop® shore, assembled from Acrow bridge components, is capable of supporting up to 200 tons, and by bracing the shores with Acrow panels, a system of superior strength and simplicity in design can be used in any vertical, horizontal or knee-bracing application.

The project was ordered by the Texas DOT. The contractor and design engineer was Zachry Construction, to whom the shores were rented. The project started in October 2018 and ended in February 2019.

“Bridge rehabilitation in crowded urban areas is always challenging,” said Bill Killeen, Acrow Bridge CEO. “This project is a great example of how Acrow shoring systems provide critical support for structures potentially at risk of collapse such as a building or bridge undergoing construction or an excavation site. Acrow’s rental program and its ability to provide crucial structural components quickly and economically help to meet the needs of DOTs and contractors alike.”