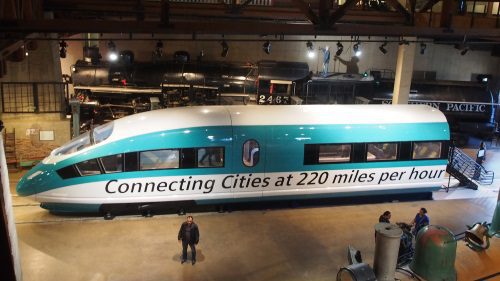 In a Feb. 19 letter, the Federal Railroad Administration informed the California High Speed Rail Authority that it intends to cancel $929 million in federal grants yet to be paid for building a high-speed rail link between Los Angeles region and the San Francisco bay area.

[Above photo by Jack Snell.]

Additionally, the U.S. Department of Transportation said in a statement that it is “actively exploring every legal option” to get California to repay $2.5 billion in federal funds FRA previously granted for, in its words, this “now-defunct project.”

“FRA has determined that CHSRA has materially failed to comply with the terms of the agreement and has failed to make reasonable progress on the project … significantly endangering substantial performance,” the agency said in its letter.

“Reinforcing FRA’s concerns … is the significant change in the state of California’s plans for its high-speed rail system,” the agency added. “During his State-of-the-State address Governor [Gavin] Newsom presented a new proposal that represents a significant retreat from the state’s initial vision and commitment and frustrates the purpose for which Federal funding was awarded.”

Yet Gov. Newsom – who characterized the FRA’s letter in a tweet as “retribution” for California’s opposition to President Trump’s emergency declaration for the purpose of building a wall along the country’s southern border with Mexico – said, “we’re building high-speed rail, connecting the Central Valley and beyond. This is CA’s [California’s] money, allocated by Congress for this project. We’re not giving it back.”

It is that second round of funding the Trump administration is trying to “claw back” from California after Gov. Newsom (D) stated in his Feb. 12 speech that “the [high speed rail] project, as currently planned, would cost too much and take too long. There’s been too little oversight and not enough transparency. Right now, there simply isn’t a path to get from Sacramento to San Diego, let alone from San Francisco to L.A. I wish there were.”

Ballooning costs are the main reason for the pullback, as the initial $33 billion estimate for building a state-wide high-speed rail network nine years ago is now $77 billion, according to CHSRA’s latest draft business plan.

Yet Gov. Newsom also stressed in his speech that California will “continue our regional projects north and south” for high-speed rail and “finish Phase 1 environmental work” while pushing for more federal funding and private dollars.