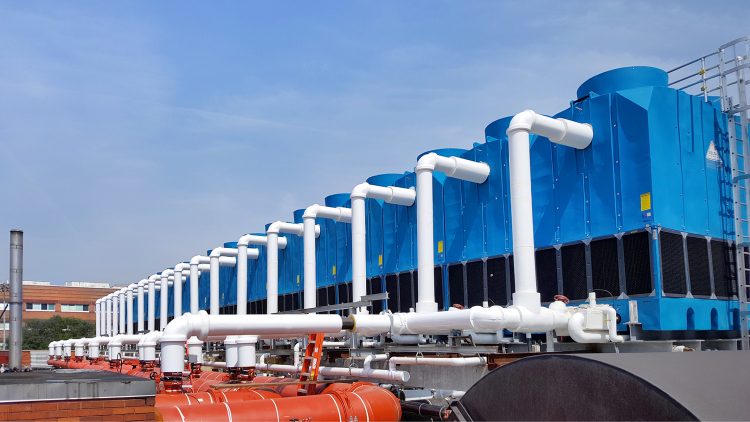 Bronx, NY – NYC Health + Hospitals, The LiRo Group, and the New York Power Authority (NYPA) have completed the installation of the first antimicrobial cooling tower ever installed in New York City. The specially designed, highly efficient cooling tower was installed on the roof of NYC Health + Hospitals/Lincoln, a medical center located at 234 Eugenio Maria De Hostos Boulevard (also known as East 149th Street) in the South Bronx. As Owner’s Representative for NYPA, The LiRo Group has managed the entire design and construction process for the new system.

NYC Health + Hospitals/Lincoln is a full-service acute care hospital and is considered one of the premier trauma centers in the country. The hospital’s Level 1 Trauma Center is the busiest in the northeast, with 144,000 emergency department (ED) visits and 550,000 clinic visits each year. The hospital houses 362 beds.

The new tower not only supports the air conditioning system, but also offers antimicrobial features that significantly reduce the risk of harmful bacteria that sometimes grow in less advanced cooling towers. The new cooling towers replace ones that had reached their expected end of life. While the old system never contributed to any health concerns, leaders at the hospital nevertheless saw an opportunity to increase protections. Following research of replacements models, the cooling tower model selected was chosen because of several innovations.

“The $11.5M project incorporated installation of both the new cooling tower and a new, energy-efficient roof. The old cooling tower and roof were original to the building, which was built in 1972. The new equipment and roofing materials provide NYC Health + Hospitals, NYPA, and the Lincoln facility itself with an incredibly efficient, cost-saving, and ultra-reliable infrastructure. The new cooling system is expected to lower the energy cost by 40 percent in comparison to the operational costs of the retired system,” said Luis M. Tormenta, PE, LiRo’s Chief Executive Officer and Vice Chairman. “In addition to providing antibacterial properties, the new tower requires a great deal less maintenance than the outdated unit we took down,” Tormenta continued.

“We worked with New York Power Authority’s team to ensure that the new cooling towers would be as energy-efficient as possible,” said Louis Iglhaut, associate executive director at NYC Health + Hospitals, who led the team responsible for selecting and installing the new cooling towers. “Our old towers used large, 48-horsepower fans on each unit, which required the use of a lot of electric power. The new modular units are equipped with smaller 5-horsepower, 18-inch fans, so the energy consumption is far less.” He adds that they also installed variable-frequency drives, which increase energy savings.

Enhanced safety to the community was a significant factor. The model selected has features that prevent or impede the potential growth of bacteria, including Legionella, which can cause a type of pneumonia commonly known as Legionnaires’ disease. The shells within the towers that hold the water are infused with an antimicrobial resin—wide-spectrum additives that operate on a cellular level to continuously disrupt and prevent uncontrolled growth of microorganisms and biofilm. In addition, while traditional metal cooling towers are vulnerable to corrosion from salt air and industrial gasses, the new towers’ high-density polyethylene design is resistant to such corrosion. Moreover, it is also resistant to the harsh chemicals required for use in treating the recirculating water and cleaning the towers.

In addition, the shells that hold the water have a rounded shape, as opposed to the boxy shape of traditional shells, with corners in which water moves less and bacterial growth can flourish. The rounded shapes do not allow water to become dangerously stagnant in spots.

Another major appeal of the model was the promise of energy savings. To meet the city’s mandate to save on energy, NYC Health + Hospitals teamed up with the New York Power Authority, a state power organization dedicated to innovative and energy-efficient infrastructure. NYPA retained The LiRo Group, a leading U.S. engineering, technology, and construction management firm based in Manhattan and Syosset, NY to oversee the project as Owner’s Representative.

The new cooling tower is composed of 24 model TM-605412 units by Delta Cooling Towers, organized in three sections, with a cooling capacity of 1,692 tons per section. The tower provides a cooling capacity of approximately 5,076 tons total. Before this project started, the hospital had five Marley units with a total capacity of 5,000 tons. Due to its efficiency, the new system will provide an annual energy use saving of approximately 239,376kw, which represents savings of $26,332 per year. 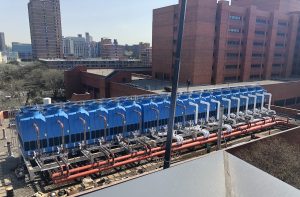 The LiRo Group and the New York Power Authority have completed the installation of a new, highly efficient cooling tower on the roof of NYC Health + Hospitals/Lincoln, a medical center located at 234 Eugenio Maria De Hostos Boulevard in the South Bronx. The new tower not only supports the air conditioning system, but also offers antimicrobial features that significantly reduce the risk of harmful bacteria growth.

As an extremely busy, operating hospital, at almost no time could Lincoln be without operating air conditioning. In fact, the hospital uses air conditioning a full 10 months out of the year – even, at times, in the month of February.

“Sometimes I think professionals like engineers and builders should be judged by things that don’t happen in the hospital,” said Milton Nuñez, chief executive officer of NYC Health + Hospitals/Lincoln. “In this case, the cooling tower went in seamlessly without interruptions to any patient areas. It was up and running with zero downtime. I commend the engineering and construction team of NYPA, LiRo, Maric, and Delta for an excellent job, from the product selection through the installation. It’s a strong message to our community that we care about their safety.”

The first part of the construction process was to take down the old cooling tower. This had to be done in sections due to the size of the old units. As they were made of metal, the team disassembled the units using saw blades and torches. LiRo phased the project in such a way that there were only a couple of selected and predetermined hours when there was no air conditioning. This was pre-planned so that the days without air conditioning were in January. Further, the project team sequenced this process in such a way that when one or two units were taken off line, a new unit was added. LiRo used a system of signoffs and reviews to help track how much air conditioning the hospital would be provided at any given time.

Once the old tower had been fully taken down, the new cooling tower – with units made of Polyethylene (HDPE) – could be completed and activated. Polyethylene is easier to keep clean and maintain and much lighter. All sections of the new tower had to be brought up using an extremely large crane. “The new tower had to be rigged in place 50 feet in the air with the crane. We had to do this over a period of several days,” said LiRo Project Executive, Marco Barbosa. “We had the tower delivered in three modules, each module with six units. We lifted one unit at a time for a total of eighteen picks.”

In order to meet all deadlines and ensure the hospital had adequate air conditioning at all times, there were many days where the team worked extended hours and on weekends.

A Matter of Safety

The LiRo team put various measures in place to ensure the safety of patients, staff, and visitors at all times. For example, each unit weighed 4,000 pounds and it had to be lifted 50 feet up in the air and onto the roof, with numerous people and emergency vehicles typically coming and going below and around the crane operation. Therefore, LiRo orchestrated a series of street closures to ensure the safety of those going into and coming out of the hospital.

According to Christopher Lynch, LiRo’s Project Manager, “Several nearby structures added to the logistical challenges. For example, the hospital’s heating and cooling plant is a five-story structure located next to the emergency department. Rigging the pipes and other equipment into place five stories up when you have a very busy ED was challenging, so we had to carefully plan all operations in minute detail and well in advance,” he added. Similarly, whenever the team had to shut down a street, they were extremely careful to keep other roads open.

The construction team also had to be exceedingly careful when scheduling the deliveries of equipment and materials onto the site, as Lincoln’s emergency department could at times have up to 20 ambulances – complete with lights and sirens – coming in each hour. At no time could construction vehicles block access to the ED. LiRo had 6 flagmen on duty to help direct human and vehicular traffic. There are a great number of people in that area who are going into and out of the hospital campus on foot, and the team had to think through – and plan for – all of the possible contingencies when something interrupted the flow of such traffic.

Finally, the hospital is located next door to a school. Therefore, the team had to coordinate with the school’s administrative staff to schedule work around the flow of school buses as well as around school-related events and activities such as fire drills, and the like.

Due to LiRo’s expert operations planning and extensive safety precautions, the project was completed on time and without any safety incidents.

About The LiRo Group

Outside of the continental United States, LiRo recently performed damage assessment and developing scopes of work for the repairs and replacements of roadways and bridges damaged by Hurricanes Maria and Irma on the U.S. Virgin Islands of St. Croix and St. Thomas.

NYC Health + Hospitals/Lincoln, located at 234 East 149th Street in the Bronx, is a 362-bed, Acute Care Level 1 Trauma Center with the busiest single site emergency department in the region. Recognized as a “2013 Top Performer on Key Quality Measures” by The Joint Commission, receiving top grades in Leapfrog Scores Safety in 2015 and 2017, and acknowledged with High Performing ranks in U.S. News & World Report in 2017 and 2018, the hospital emphasizes primary care and specialty medicine and uses the latest advances in medical science.