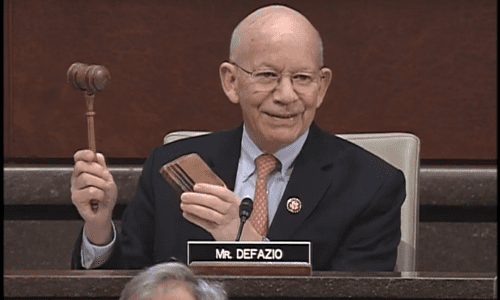 A variety of surface transportation funding mechanisms were debated during an all-day informational hearing held by the House of Representatives Transportation and Infrastructure Committee on Feb. 7, with a focus on the need to increase the federal fuel tax.

“For years we have held hearings documenting the deterioration of our infrastructure – now we’ve run up a $2 trillion funding gap,” explained Chairman Rep. Peter DeFazio, D-Ore., (seen above) during his opening remarks.

“Federal fuel taxes have been stagnant since 1993; they now have only 40% percent of their former buying power, maybe less,” he stressed during the hearing, entitled The Cost of Doing Nothing: Why Investing in Our Nation’s Infrastructure Cannot Wait.

“States and localities are bellying up to the bar for higher fuel taxes – and nobody has lost an election over it. There is no danger to increasing user fees for the first time in 23 years,” Rep. DeFazio said. “But if you have a better idea, let me know.”

He added in his remarks that “we need a reinvigorated Federal role and a commitment to public infrastructure, and a 21st century vision for transportation policy that will meet the needs of the next generation of Americans and vehicles. We can’t just maintain what we have, we also need to modernize how we plan and build transportation projects.”

Ranking Member Rep. Sam Graves, R-Mo., added that “infrastructure can bring us together as few other issues can. But it is rare that the stars are aligning on an issue like this the way they are now.”

Yet Rep. Graves emphasized that long-term solutions to the nation’s infrastructure issues cannot be adequately addressed without fixing the Highway Trust Fund first. “And I believe the only viable option for the future [of surface transportation funding] is to transition to a vehicle miles traveled tax or VMT. That makes sure everyone contributes to highway funding – we need to pursue it nationally,” he added, stressing in his remarks that “we can’t waste this opportunity.”

Ray LaHood, co-chair of the Building America’s Future advocacy group and a former secretary of transportation during the Obama administration, suggested raising the federal fuel tax by 10 cents per gallon and then indexing it to inflation, but also combining that measure with other funding sources.

“You need to couple it with public-private partnerships, tolling, and a VMT fee,” he stressed. “We can’t fix our infrastructure problems with any single one of those; we have to create a big pot of money.”

LaHood went on to emphasize that “everyone knows what the problem is – America is one big pothole. And you can only do so much filling of them year in and year out. Our interstates are crumbling and we have 60,000 structurally deficient bridges. The issue is not knowing what to do; the issue is how to pay for it.”

He also pointed out “you can have a big, bold plan” for fixing and improving the nation’s infrastructure, “but if [President] Trump is not with you, it will be difficult to pass in the Senate. But if the president is on board, he’ll sell it to the Senate and – boom! – America is back in the transportation business.”

LaHood also cautioned that “there is a very short window to get a [infrastructure] bill done. If it does not happen this year, it will have to wait until after another presidential campaign.”

Gov. Walz – who made raising taxes to fund infrastructure one of his key campaign planks – emphasized that “voters are smart; they are not begging for taxes to be raised but they know the alternative” is crumbling infrastructure.  “The country is ready for a bold take on infrastructure; it can’t be funded by the gas tax alone, but it [the gas tax] gives us a reliable funding stream to allow us to get things done.”

Yet Rep. Mark Meadows, R-N.C., noted during the question and answer portion of the hearing that “we’re talking about doing things that are ‘bold’ but I don’t know that raising the gas tax is ‘bold.’ Quite frankly it is a short term solution [but] I am willing to look at it and put in the political capital to make sure that we have proper funding, but let’s make sure we’re doing something truly bold.”

To that end, Rep. Meadows asked Gov. Walz for his help in determining state support for increasing federal fuel taxes: “Here I would ask your help [and] I am willing to take a tough vote: how many of the governors are in favor of raising the gas tax? We need to know that. Can you report back to this committee on that?”

Gov. Walz said he would report back on their sentiment regarding higher federal fuel taxes. “Yes Congressmen. While I don’t speak for all of them on this, and they have not taken a position on it, we have taken a position that one funding stream alone will not do it,” he said. “I don’t disagree with you on this; this is not the overall long-term solution, but when you are out in the states, this is the one we have. So we’ll get back to you on that.”

In other committee news, Rep. DeFazio and Rep. Rick Larson, D-Wash., introduced a bill on Feb. 8 that would shield Federal Aviation Administration programs and personnel from the impact of future Federal Government shutdowns.

First, it would authorize the FAA to continue to draw from its Airport and Airway Trust Fund during shutdown as the AATF generates enough revenue from the domestic passenger ticket tax, commercial fuel tax, general aviation gasoline tax, and cargo tax, among other sources, to sustain all of the agency’s programs without a general fund contribution. And, second it would allow the entire agency to operate at current funding levels, with no Congressional action – ensures that all FAA programs function uninterrupted and that all FAA employees continue to be paid.

“Allowing the FAA to draw from the AATF during a funding lapse will ensure essential personnel who work under immensely stressful situations continue to get paid, and that the largest, busiest and most complex airspace system in the world remains safe for passengers and employees,” said Rep. Larsen, who chairs the House Subcommittee on Aviation, in a statement.

“The effects of this most recent shutdown will be felt for years to come. This must not happen again,” added Rep. DeFazio, who chairs the House Transportation and Infrastructure Committee. “Our legislation ensures that in any future government shutdowns, all FAA programs will function uninterrupted and that all FAA employees can remain at work and paid. The users of the National Airspace System pay for the system and deserve for it to function without interruption.”