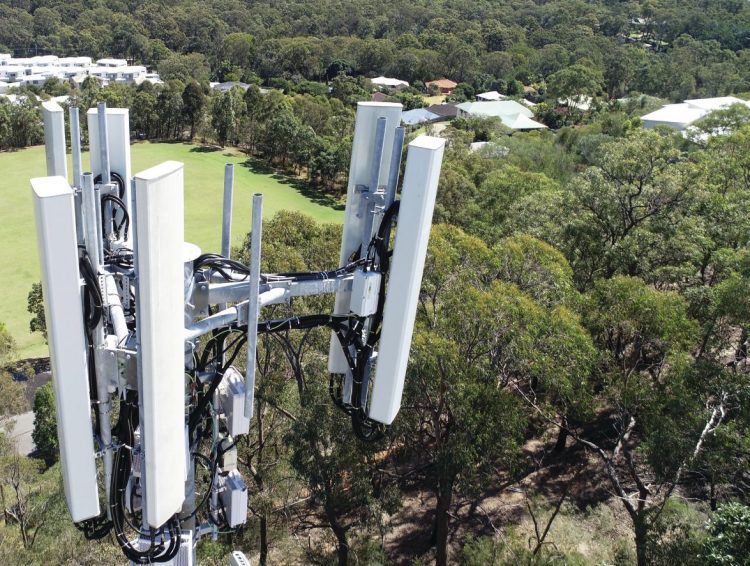 Determining the precise number of cell towers in the world is a difficult task, complicated by the lack of coordinated international reporting and the difficulty of distinguishing between base stations (which may or may not be sited on a tower-like structure) and actual towers (which may host several base stations). But reasonable estimates for the global number of cell towers cluster around 4 million—a huge figure in any context, especially when the first cell tower was only erected about 40 years ago.

Cell towers occupy an interesting position in the age of Big Data. They’re essential components of a vital information-based technology that has achieved global ubiquity on the back of the enormous efficiency gains in computing technology that seem to have remade the very fabric of our newly digital world. But cell towers themselves are not digital or ephemeral; they remain stubbornly physical, tall masts of steel supporting the actual nuts-and-bolts machinery that keep trillions of bits and bytes flowing reliably around the world.

To move in that direction, Australian telco giant Telstra, Brisbane-based technology startup SiteSee and design software company Bentley Systems collaborated in 2018 on a small pilot project that applied cutting-edge digital technology to the nuts-and-bolts reality of cell-tower inspection and maintenance, demonstrating scalable efficiency gains that could easily remake this slice of the sprawling world of cellular communication.

Telstra, Australia’s largest telecommunications company, maintains and operates more than 8,000 cell towers in the country—all of which are difficult to inspect or work on … by design. Typical towers are 25-meter (82-foot) monopoles and are intended to be unclimbable; doing any work at all on the towers requires a mobile lift platform and a three- or four-man crew to operate it safely. Work is performed by contracted crews, requires half a day minimum (even for routine projects), and any survey work done usually is performed crudely by non-surveyors using tape measures.

For Telstra, the bottom line is that any tower visit is expensive, so necessary maintenance work is only performed every two to five years. And there’s no such thing as “routine” inspections, as nice as they might be for proactively scheduling maintenance and upgrades. Instead, inspections are only performed during scheduled or emergency maintenance visits. This was especially challenging for operators of recently upgraded towers—they had no way to inspect or audit the upgrade work performed by contractors until the next maintenance visit, and that could be years off.

Enter SiteSee, a 2016 technology startup dedicated to the development of high-tech solutions for the “virtual management of infrastructure” for the telco and power industries. 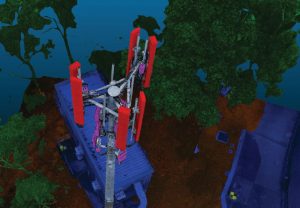 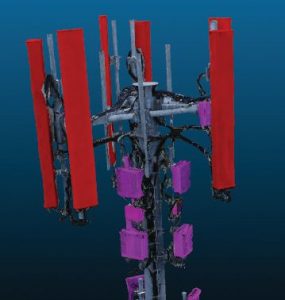 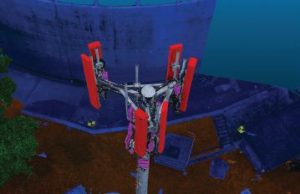 UAV-mounted cameras can capture precise, accurate point clouds that can be processed into detailed, engineeringready models for use in most design solutions.

According to SiteSee Founder and CEO Lucio Piccoli, “Any improvements, even small gains, Telstra can make to the operation, maintenance or inspection workflows of cell towers has the potential to scale up significantly.”

In 2018, SiteSee completed a pilot project for Telstra that demonstrated the utility of UAV as-built surveying of cell towers, models created with photo-captured point clouds, and the groundbreaking use of artificial intelligence solutions for the automatic identification and analysis of complex tower-mounted equipment. The ROI achieved on this single, small pilot project—just seven towers were involved—shows definite potential for scalability that could revolutionize cell-tower inspection and maintenance around the world.

“We were proposing they do business a new way, when it came to inspecting and auditing cell towers,” explains Piccoli. “The seven towers we looked at were all in urban areas, and they had all been upgraded recently with new equipment to meet the needs of growing urban populations. But no audits or as-built surveys had been conducted after the upgrades, and Telstra operators had no way of knowing if the new equipment had been installed according to specifications.”

1. Towers were scanned with UAV-mounted cameras that provided high-resolution, pixel-based point clouds.
The tower geometry collected was nearly as accurate and high-resolution as laser-scanned data—at considerably less expense. SiteSee proposed that Telstra’s existing inhouse UAV team perform this work, using UAV flight plans and data collection protocols provided by SiteSee. This was successful in practice, and the Telstra two-man crews were able to gather point-cloud data of sufficient quality and resolution, averaging about 15GB of data, in less than one hour. That workflow should be compared to a four-man crew spending at least half a day on inspection using mobile lift platforms.

2. SiteSee used Bentley Systems’ ContextCapture to efficiently process the point clouds into fully rendered, geometrically accurate 3D models that were “digital twins” of the actual towers.
“We looked at a lot of different solutions for photogrammetric processing, and ContextCapture was the best tool available,” notes Piccoli. “Given the demanding nature of vertical work on towers and the need for very high-resolution models, it was the only tool that would actually do what we wanted it to do.”

Bentley’s support team also was exceptionally helpful. “Photogrammetry work on slim, vertical structures like the towers is a little unusual, and photo-capture packages aren’t really optimized for them,” explains Piccoli. “We talked about this in detail with Bentley engineers, and they actually made changes to the app that made our work easier and higher quality. For example, in Update 8 they introduced an aerotriangulation process that deemphasizes ground control and focuses more on tower features for point-cloud registration. That helped a lot.”

3. These accurate models were rendered “intelligent” via SiteSee’s proprietary, artificially intelligent 3D analysis solution that automatically identified and tagged different types of antennas (and other equipment) from different vendors.
This efficient process—photo capture plus AI analysis modeling—delivered an accurate record of the site and tower equipment, saving many hours of CAD operator time. The resulting engineering-ready model was far more accurate than previously attempted modeling and as-built surveying, and more useful for Telstra. In fact, the resulting models were accurate enough for immediate use by engineers to identify all installed equipment for comparison to inventories as well as to perform audits of contractor-performed upgrade work. 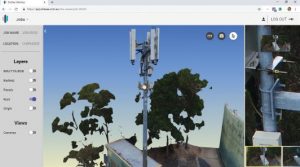 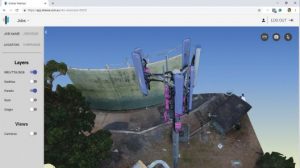 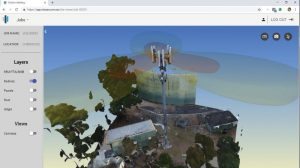 Identifying the particular models and types of antennas and other equipment used in cell-tower arrays typically is tedious. An AI-powered solution was used to automate this task, saving many hours of technician time.

Geoff Zeiss, principal at Between the Poles, a geospatial industry thought-leadership consulting firm, looked closely at this project as a juror for Bentley Systems’ 2018 Year in Infrastructure awards event. He was impressed. In addition to automating tower-feature identification, he says, “SiteSee’s deep learning can also automate the process of assessing the condition of each antenna by comparing scans to as-builts and manufacturers’ specifications to detect out-of-alignment antennas and antennas with signs of corrosion.” If true, this feature of the new workflow could dramatically improve cell-tower performance over long lifespans with minimal, proactive maintenance investments.

Zeiss also likes the progressive UAV use on this project. “With a smart UAV and automatic classification, the time-consuming and hazardous task of inspecting communications towers could be fully automated, saving a lot of time and increasing reliability of communications networks by enabling more-frequent, less-expensive inspections,” he notes. “This is just the beginning of using LiDAR and other types of scanning together with software such as Bentley’s ContextCapture and various AI technologies to automate expensive, labor-intensive processes in the telecommunications and utility sectors.”

SiteSee delivered the digital twin models in two formats: 1) a 3D PDF for use on the client’s desktops, and 2) a web-accessible version served by SiteSee’s own cloud viewer. Both deliverables were based on ContextCapture’s reality mesh technology, and are fully 3D and manipulatable (viewers can zoom, rotate, extract views, etc.), provide users the ability to extract precise measurements, and the web version uses dynamic Level of Detail technology to enable fast loading and viewing.

The resulting models were accurate enough for immediate use by Telstra to identify all installed equipment for comparison to inventories and perform audits of contractor-performed upgrade work. They were created quickly and cost-effectively compared to previous manual inspections and, importantly, this “inspection” and the associated work to create the digital twins required no work from an aerial platform, exposing Telstra to significantly less risk in terms of safety issues. Telstra says that “the project team reduced asset inspection and maintenance costs by 69 percent and project delivery lead time by 86 percent.”

The project was successful per its initial stated goals: the automation of tower inspection with low-cost, risk-free UAV work, and the rapid and accurate audit of contracted work using high-resolution digital twins of the actual towers. But more value will be extracted from future use of the digital twins.

For example, because inspections now can be performed more often, new data gathered can be easily compared to current models, and variations in geometry can be recorded to perform stress analysis. This data, in turn, can be used to schedule maintenance proactively, possibly avoiding costly service disruptions. Likewise, some maintenance now can be intelligently deferred. And as more UAV work is performed and more digital twins are created, Telstra will be able to make more cost-effective decisions about upgrades, contracted work and how to expand UAV use. 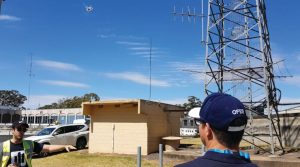 UAV-mounted photogrammetry proved to be a more-effective and safer way to perform as-built cell-tower surveys,replacing technicians on mobile-lift platforms.

“There’s just too much friction in their current workflows to get much value from inspection, upgrades or maintenance,” adds Piccoli. “Workflows based on high-quality modeling created efficiently by UAV-based reality capture offer a lot more potential value, and I expect Telstra to discover a lot of new ways—things they haven’t thought of yet—to extract more of that value.”

Although this was a successful project, there were challenges. “We were initially slated to create digital twins for 25 towers,” explains Piccoli. “But management changed mid-project, there were some disputes about the allocation of the internal UAV resources, and our main contact—the Telstra champion for this experimental work—moved on to other responsibilities, also mid-project.”

Piccoli is philosophical about these disruptions. “We were given the opportunity to show them something that’s entirely new, and successfully demonstrated useful, cutting-edge technology in deliverables they were able to use immediately to solve real business problems,” he says. “The problems, well—that’s just the nature of pilot projects. We’re delighted that we were able to demonstrate our new solutions and prove they work out practically.”