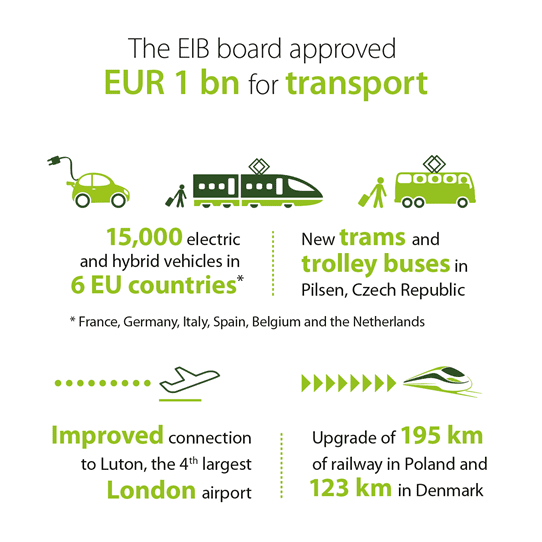 The European Investment Bank on Tuesday approved a total of EUR 4.8 billion of new financing for private sector, transport, energy, housing and water investment. This included EUR 864 million support for investment outside Europe.

“The EU Bank is all about impact. It is important to us that all EIB financed projects meet the highest environmental and social standards, reflect local concerns and follow policy best practice. Yesterday’s dialogue with leading international and national NGO’s and industry bodies provided valuable new input for our work. The relevance of EIB activity across Europe and around the world is reflected in the diverse range of projects agreed today from improving local services and education facilities in Europe to enhancing access to clean energy across Africa.” said Werner Hoyer, President of the European Investment Bank.

The EIB board today approved EUR 2.3 billion of new direct and indirect financing that will enhance access to finance by companies across Europe and Africa.

This includes support for agriculture and tourism investment in Italy, financing for sustainable and climate related investment by companies in the Benelux and backing for private sector financing in Egypt.

The EIB also approved a new targeted lending programme to support financing for innovative companies owned by women in Italy.

The EIB Board approved more than EUR 1 billion of financing for rail, urban and electric transport.

This includes financing for the deployment of 15,000 new electric and hybrid vehicles by a leading leasing company operating in France, Germany, Italy, Spain, Belgium and the Netherlands.

The EIB will support the upgrade of a 195km key intercity rail route between Poznan and Szczecin in Poland and a key section of the rail link between Denmark and Germany, as well as replacement of trams and trolley buses in the Czech city of Pilsen.

The board also confirmed financing for the first new direct rail link to London’s Luton airport.

The EIB Board backed EUR 670 million of investment that will support renewable energy in Europe, Africa and Asia. It also agreed financing for an upgrading of the Finnish national electricity transmission grid.

New financing will support the increased use of solar energy by households and small companies in Africa and Asia alongside new investment in large-scale renewable energy and energy efficiency across Africa.

Backing for the construction of 500 roof-top solar systems on schools managed by the Palestinian Authority that will significantly reduce energy costs was also approved.

Today’s EIB board meeting agreed to support transformational investment in towns across Serbia for communities at risk from severe flooding, to improve water and sanitation in small towns in Republika Srpska, Bosnia and Herzegovina, and rehabilitation alongside the Lana River in the Albanian capital Tirana.

The EIB also agreed to support investment to improve research and teaching facilities at the faculties of Aerospace Engineering and Applied Chemistry at the Bucharest Polytechnic University in Romania and construction of a new Science Faculty at the University of Namur in Belgium.

EUR 1.2 billion of new investment backed by the Investment Plan for Europe

Financing for 6 projects approved by the EIB board today will be guaranteed by the European Fund for Strategic Investments (EFSI), They are expected to mobilise more than EUR 4 billion of total investment.

The European Investment Bank (EIB) is the long-term lending institution of the European Union owned by its Member States. It makes long-term finance available for sound investment in order to contribute towards EU policy goals.

Overview of projects approved by the EIB Board:

Overvw of projects approved by the EIB Board of Directors following positive assessment by the EFSI Investment Committee: