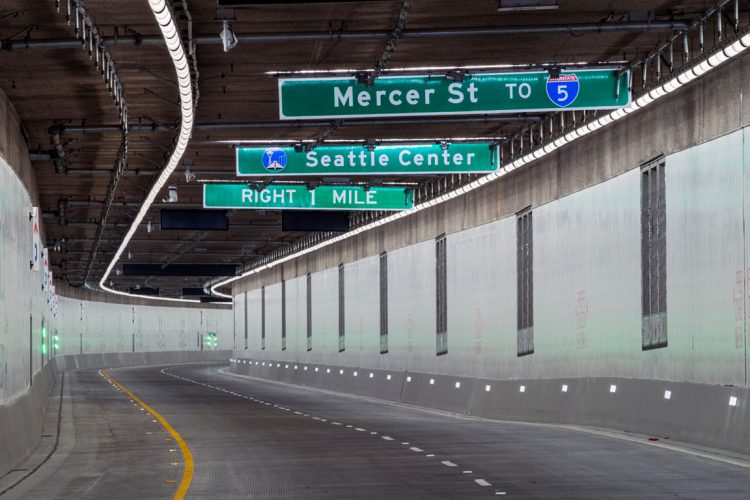 BELLEVUE, Wash.  – The Washington State Department of Transportation officially opened the SR 99 tunnel in Seattle — designed by HNTB Corporation — with a series of special events last week. The project is part of the Alaskan Way Viaduct Replacement program, one of the largest infrastructure projects in the United States.

The SR 99 design-build project was led by Seattle Tunnel Partners, a joint venture between Dragados USA and Tutor Perini. Serving as lead designer and engineer of record for the complex project, HNTB was responsible for design of the 2-mile-long bored mega-tunnel. The firm designed the permanent structures and facilities, including the tunnel liner, the interior stacked roadway structure, approach cut-and-cover tunnels, approach roadways and operations buildings located at each portal.

“Completing the tunnel marks an important milestone in national transportation history,” said Brian Russell, PE, HNTB project manager. “Through tireless collaborative efforts and thorough application of technical excellence and best contracting practices, this project proved that tunneling beneath a dense urban environment is possible, setting the stage for other cities to do the same.

The 57.5-foot diameter tunnel boring machine was built by Hitachi Zosen of Japan. Known as “Bertha,” it was the world’s largest diameter earth pressure balance TBM. Bertha bored under 157 buildings in the core of Seattle, as well as bridges, a railroad tunnel and several large sewers, at depths of more than 200 feet.

“The SR 99 tunnel will have a profoundly positive effect on Seattle,” said Jim Thomson, PE, HNTB Northwest Division president. “From a mobility perspective, the tunnel creates a convenient and efficient north-south passage, and from a real estate perspective, it will be instrumental in transforming the downtown waterfront, making it a much more residential, commercial and tourist-friendly environment. We would like to congratulate WSDOT and the people of Seattle on the completion of this transformative tunnel.”

WSDOT held a public celebration the weekend of February 2-3, including a formal ribbon-cutting event, tunnel tours, and a festival located near the North Tunnel portal on Sixth Avenue North and Harrison Street. In addition, there was a 12.5-mile bike ride beginning at the North Portal, and a Tunnel to Viaduct 8K Fun Run/Walk. HNTB sponsored the Fun Run/Walk, attracted close to 29,000 participants, making it the largest run in Seattle’s history. The races both began and ended at the North Portal, with runners reaching the South Portal before heading back on the lower deck of the viaduct.

“The tunnel and underground team at HNTB is extremely proud of the work done on the SR 99 tunnel,” said Sanja Zlatanic, PE, HNTB chair national tunnel practice, senior vice president and HNTB Fellow. “The tunnel innovative design solution benefitted from significant developments in the mechanized tunneling industry over the past two decades. I am sure it would be used as a cornerstone for future advancements and creative tunneling solutions beneath densely populated cities across the nation and worldwide. Residents of Seattle will utilize this world-class tunnel as their own groundbreaking transportation and mobility solution for generations to come.”

HNTB established its Seattle office in 1961, but the firm traces its roots in the region back to 1912, when the Columbia River Interstate Bridge between Portland, Oregon, and Vancouver, Washington, opened. The bridge was designed by John Lyle Harrington, a partner in HNTB’s predecessor firm, Waddell & Harrington. HNTB has grown to employ more than 180 professionals in the region who help play a role in planning and delivering high-profile transportation infrastructure projects across the state and around the country.

HNTB Corporation is an employee-owned infrastructure firm serving public and private owners and contractors. With 105 years of service in the United States, HNTB understands the life cycle of infrastructure and addresses clients’ most complex technical, financial and operational challenges. Professionals nationwide deliver a full range of infrastructure-related services, including award-winning planning, design, and program and construction management. For more information, visit www.hntb.com.