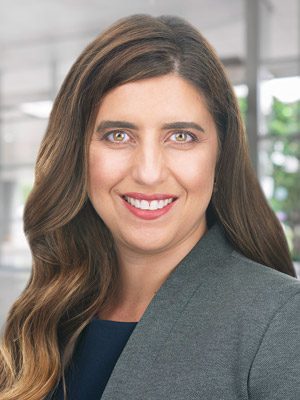 The Gannett Fleming board of directors has promoted Audrey Daly, Esq., to the role of general counsel. Daly becomes the second person to hold this role in the firm’s 104-year history.

“In her prior role as corporate counsel for Gannett Fleming, Audrey demonstrated an amazing capability to create an agile and responsive approach to addressing our legal needs,” said Bob Scaer, PE, chairman and CEO. “Now, in her role as general counsel, she will guide the firm on a wide range of legal matters, including those related to international and corporate law, patents and trademarks, business continuity and disaster recovery, litigation, and all phases of engineering design and construction.”

Daly held the role of corporate counsel at Gannett Fleming for nearly seven years. In that time she has served as the primary attorney for international operations, managed complex professional liability claims, helped countless project teams navigate and negotiate contracts, and played a critical role in revising or writing corporate and personnel policies.

Daly, who will also continue in her role as corporate ethics officer, began her career as a wetlands biologist and then an environmental compliance specialist. She then pursued a career in law, practicing commercial litigation with a focus on construction law. Daly earned a Bachelor of Arts in biology and Spanish from Bucknell University and a Juris Doctor from Penn State’s Dickinson Law.

Daly replaces Barbara McLemore, Esq., DBIA, who joined Gannett Fleming in 1980 as the firm’s first in-house attorney and who became the second female stockholder of the firm in 1993.

“The solid foundation that Barbara has set in our Legal Department will positively impact the firm for years to come,” Scaer said. “She set a standard and expectation of integrity in every interaction as the firm’s first corporate ethics officer and facility security officer. I am grateful that she chose to call Gannett Fleming home.”

Under McLemore’s leadership, the legal team has guided 45 acquisitions and sales transactions, negotiated and reviewed more than 1,400 contracts annually, and is adopting the use of artificial intelligence in contract review. In 2017, she was one of three co-founders of Connected Women at Gannett Fleming™, an employee resource group with the mission to create a culture that empowers, supports, and mentors women to achieve career and personal success at Gannett Fleming. Dickinson Law’s Women’s Law Caucus presented McLemore with the Hon. Sylvia H. Rambo Award in 2018 for her career achievements and leadership in promoting women.