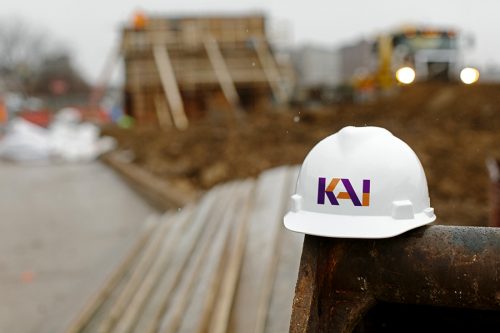 St. Louis, MO –  KAI Design & Build, an integrated architectural, engineering and construction services firm providing design and construction solutions across the country for nearly 40 years, has announced a corporate restructuring and will now be known as KAI Enterprises. KAI Enterprises, which will simply go by KAI publicly, will serve as the parent company of four new subsidiaries—KAI Design, KAI Engineering, KAI Build and KAI 360 Construction Services (KAI 360 CS). As part of the restructure, KAI will launch a new branding effort in February that includes a new corporate brand identity, logo and tagline as well as a new website.

The name change and restructure reflects KAI’s broader commitment to its clients and the AEC industry and unifies the company’s operations under a new core focus and set of core values.

CEO Michael Kennedy, Jr. officially launched the new structure in October 2018, with Darren L. James, AIA, transitioning to President of KAI Enterprises. James, a shareholder within the company since 2010, was formerly the President and COO of KAI Texas.

“This is a new day for service delivery in the design and construction industry,” said James. “The continued evolution towards better and greater communication enhances the work environment for our staff and provides a more comprehensive experience for our clients. We believe in long-term, mutually beneficial relationships with our clients and our restructuring is our investment in continuous improvement, evolution and reinvention to better serve our clients, staff and community.”

In 2017, Michael Kennedy, Sr., founder and chairman of KAI Design & Build, retired and sold his company shares to his son, Michael B. Kennedy, Jr. The younger Kennedy decided at that time to restructure KAI and create new entities for each of the company’s business lines under the umbrella of a new holding company.

KAI is now poised through its four distinct business units to serve its clients with national resources from its headquarters in St. Louis and offices in Atlanta, Dallas, Omaha and San Antonio.

“As a shareholder of the KAI family of companies, it is my intention to strategically place the parent company and each business unit in the most advantageous position for growth, stability and profitability, regardless of the external economic climate,” said James. “As the President of KAI Enterprises, it is my role to create opportunities that sustain our business unit’s individual goals, and nurture and grow our staff with exciting projects with a purpose to transform the communities we touch.”

The four new entities and respective leadership under the restructuring include: