/ Featured / SOM’s Design for Alárò City is Launched in Nigeria

SOM’s Design for Alárò City is Launched in Nigeria 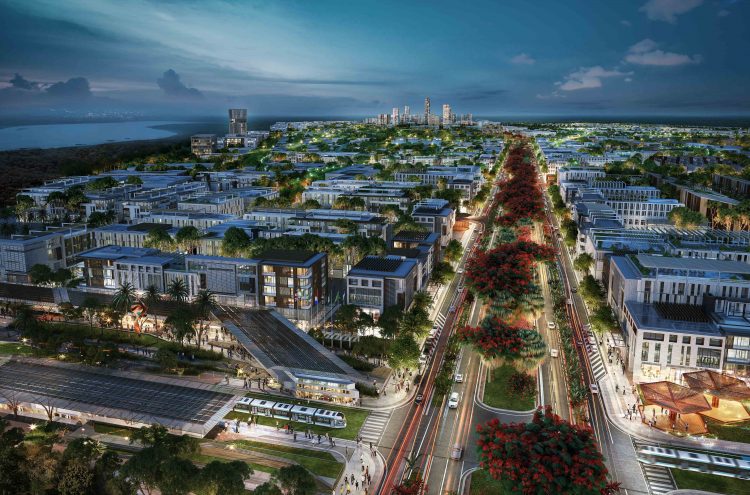 Located in the North West Quadrant of the Lekki Free Zone, the master plan lies in the growth path of Lagos, one of Africa’s fastest-growing cities with a population of over 20 million, and is adjacent to the future international airport, the region’s largest deep-sea port, and major Nigerian and international companies.

By focusing first on natural systems, SOM designed a master plan that protects and enhances the unique conditions of the site while enabling longterm resiliency for the future city.

“The plan is structured around six greenways, aligned north-to-south with the prevailing winds and existing topography, and spaced 800 meters apart to ensure that all residents and workers are no more than a five-minute walk from open space,” highlights Gareth Edwards, Associate at SOM.

SOM also planned transport infrastructure to support local connectivity and to allow for higher density, walkable mixed-use districts and neighborhoods. Larger industrial and logistical development plots are located in the south, adjacent to an inter-district transport corridor, while neighborhoods for residential, mixed-use, and commercial development are located to the north, oriented towards the lagoon. A main boulevard connects the commercial, enterprise, and educational areas on the north with the research with the industrial area on the south.

A vibrant city core will become the civic heart of the Free Zone—a focal point for innovation and collaboration, as well as a destination for leisure and entertainment. The development is complemented with shaded, pedestrian-friendly streets and strong connections to public transit. A clearly defined network of urban plazas will link to a 14-hectare Central Park, designed to support a variety of events and bring people together.

At a ceremony marking the start of the project, which already has multinational companies building facilities on site, Alárò City’s partners outlined their vision for the satellite city. 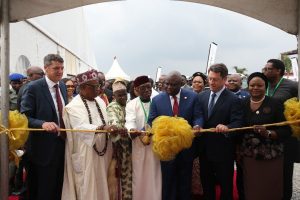 “We welcome the substantial foreign direct investment Rendeavour is making in Alárò City, which will further enhance the Lekki Free Zone as the gateway of choice to Nigeria and West Africa,” said Lagos State Governor Akinwunmi Ambode. “Alárò City symbolizes the government’s continuous support for private investors and fast-tracking development.”

Stephen Jennings, founder and CEO of Rendeavour, said: “We are proud and delighted to be bringing our successful inclusive city model to Nigeria and Lagos State, the heart of the country’s vibrant economy. Our partnership with Lagos State will ensure that Alárò City is an economically sustainable city open to all Nigerians.” 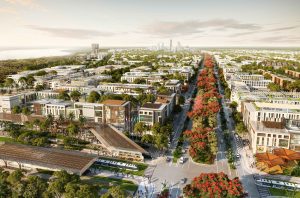 Skidmore, Owings & Merrill LLP (SOM) is one of the leading architecture, interior design, engineering, and urban planning firms in the world. Since its founding more than 80 years ago, SOM has earned a reputation for design excellence with a portfolio that includes some of the most important architectural accomplishments of the 20th and 21st centuries, and has been a leader in the research and development of specialized technologies, new processes and innovative ideas, many of which have had a palpable and lasting impact on the design profession and the physical environment. The firm’s longstanding leadership in design and building technology has been honored with nearly 2,000 awards for quality, innovation, and management. The American Institute of Architects has recognized SOM twice with its highest honor, the Architecture Firm Award—in 1962 and again in 1996. The firm maintains offices in New York, Chicago, San Francisco, Los Angeles, Washington, D.C., London, Hong Kong, Shanghai, Dubai, and Mumbai.

Alárò City is a mixed-income, city-scale development with master-planned areas for offices, logistics and warehousing, homes, schools, healthcare facilities, hotels, entertainment and 150 hectares of parks and open spaces. Rendeavour and Lagos State Government, through their subsidiary, North West Quadrant Development Company (NWQDC), have conceived Alárò City as a 2,000-hectare, market-led project. NWQDC is authorized by both the Federal Government of Nigeria, through the Nigeria Export Processing Zones Authority, and the Lagos State Government as an entity to develop, operate, administer and manage Alárò City.

The Lekki Free Zone, created in 2006, is a modern free zone managed in accordance with international best practices. The zone’s 16,500 hectares are divided into four quadrants and managed by various operators, benefiting from Lagos State’s position as the premier distribution hub in West Africa. The Lekki Free Zone is located in the southeastern corner of Lagos State, facing the Atlantic Ocean to the south and the Lekki Lagoon to the north. It is bordered by five kilometers of coastline and is 50 kilometers from Victoria Island, Lagos.

Rendeavour is Africa’s largest new city builder, with over 12,000 hectares (30,000 acres) of city-scale developments in the growth trajectories of large cities in Kenya, Ghana, Nigeria, Zambia, and Democratic Republic of Congo. Rendeavour is creating the living and working spaces that will help sustain and accelerate Africa’s economic growth, meet the aspirations of Africa’s burgeoning middle classes, and serve as a catalyst for further urban development