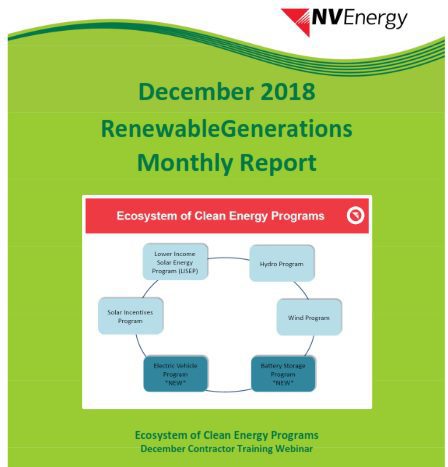 NV Energy’s recently-released December 2018 Renewable Generations report shows that, thanks to the work of the 2017 Legislature, there were nearly 15,000 applications for rooftop solar projects last year, with almost half of them already completed. This represents a 450 percent growth in solar applications over 2017 and would generate enough electricity to power 20,000 Nevada homes. These projects create jobs and reduce consumers’ utility bills, and were made possible thanks to one of the nine bipartisan clean energy bills passed and signed into law in 2017.

Clean energy advocates across Nevada, like Sol-Up USA CEO Frank Rieger, cheered the report, but noted that there’s more work yet for Carson City when it comes to advancing clean energy.

“The incredible boost in rooftop solar projects shows what happens when our state’s leaders work together to improve Nevada’s clean energy economy,” said Sol-Up USA CEO Frank Rieger, “but there’s more work to do. The Legislature should build on this tremendous success by fostering development of community solar gardens, which allow smaller and lower-income consumers to band together to produce their own solar power. They should also enact the strengthened Renewable Portfolio Standard voters overwhelmingly called for when they passed Question 6 last year and encourage the use of electric vehicles so more families and businesses can use Nevada’s massive clean energy potential to power their cars and reduce their energy costs.”

You can read the full report here.

About CEW4NV: Clean Energy Works for Nevada is a coalition of businesses and advocates who support a strong clean energy economy for the Silver State. We believe smart state policies and investments in clean energy today will mean economic success for our state tomorrow.