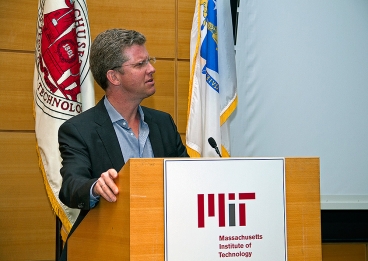 This week, Housing and Urban Development (HUD) Secretary Shaun Donovan called for a new creativity in urban planning, during a talk at MIT. Political pressures, environmental changes and fiscal troubles have all combined to exert pressure to do more with less.

“How do we plan in an age of austerity?” Donovan asked. At bottom, he suggested, planners will have to make especially sharp appraisals of the long-term value of their work.

Donovan discussed climate change in his remarks, observing that the 12 hottest years on record have all occurred in the last 15 years. He said that since last October’s Hurricane Sandy, which did considerable damage to parts of the East Coast, HUD has worked on a series of measures to help intensify long-term planning efforts nationwide.

“In some ways, the greatest challenge that we face is not how will these communities think about climate change while the memories of Sandy are still fresh, but how we ingrain the issue of climate change into the day-to-day planning that is done, not for the next year or the next decade, but for decades beyond that,” Donovan said.

Comments are disabled
NEXT ARTICLE
Federal Agencies Expand Urban Waterway Revitalization Efforts in Communities Across the Nation
May 10, 2013
PREVIOUS ARTICLE
TM Forum and Esri Provide Solution to Maintain Telecom Services during Disasters
May 9, 2013