/ News / New Visitor Center at Historic Site in Bulgaria Is Being Designed by SKOLNICK Architecture + Design Partnership as a Collaboration: The Bishop’s Basilica of Philippopolis

New Visitor Center at Historic Site in Bulgaria Is Being Designed by SKOLNICK Architecture + Design Partnership as a Collaboration: The Bishop’s Basilica of Philippopolis 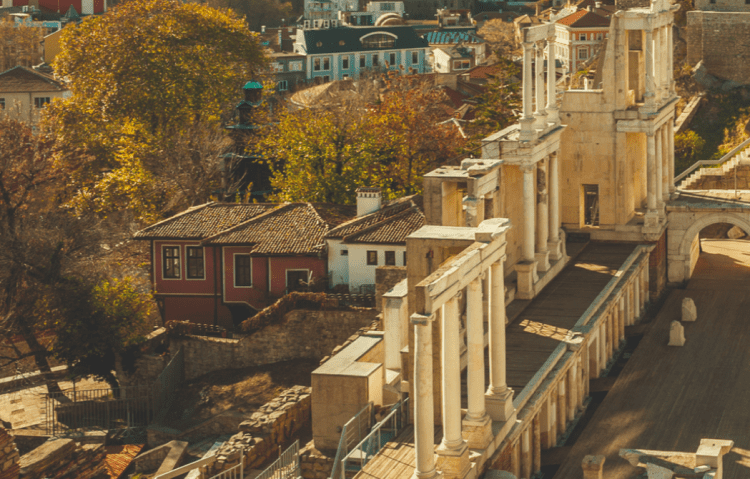 SKOLNICK Architecture &Design Partnership, based in New York, is collaborating with two Bulgarian firms on the design of a new visitor center at an important archaeological site in Plovdiv, Bulgaria: the Bishop’s Basilica of Philippopolis. It is an ancient Roman church where extensive 4th and 6th Century mosaics, along with other artifacts, have been uncovered. Here, colorful mosaics cover approximately 2,000 square meters in two layers in the center of Plovdiv, the second-largest city in Bulgaria, just named a European Capital of Culture for 2019 and also known for its 2nd-century Roman amphitheater. The center will open in late-September 2019; its goal is to conserve, restore, display and protect the basilica, which is still being excavated.

Working with local architects Zoom Studio of Sofia and Atelier Duo of Plovdiv, SKOLNICK Architecture + Design Partnership is consulting on the design of a large enclosure over the mosaics and also designing the visitor experience, which will include exhibits, interactive components, graphics, and exterior plaza and walkways through the site. This facility will be a living, working site, with active archaeological work going on even as visitors are walking through. “Having completed several large projects in Bulgaria, including The Children’s Museum of Bulgaria, we are thrilled to have been retained to work on the Basilica,” said Lee Skolnick, senior principal of the firm.  “It’s apparent from the size of the mosaic floors that the scale of the original structure was enormous, and it’s been a challenge to simultaneously protect and expose them. They are magnificent – very well preserved, colorful and vivid. They’re a world treasure.”

The America for Bulgaria Foundation is joined by the Municipality of Plovdiv, the Ministry of Culture and the national government in supporting the archaeological work and the design and construction of the visitor center.  Nancy Schiller, President of the America for Bulgaria Foundation, says that, “This project, in conjunction with the status of Plovdiv being a European Capital of Culture, will bring the world’s attention to this beautiful, historic and culturally important city.”

The mosaics are typical of Roman-era work; they reference Christian iconography including a peacock at a “spring of life” fountain, which is a symbol of eternal life; more than 100 unique images of birds, including pairs of doves and parrots; and they also form intricate geometric patterns over large areas.

Background on Bulgaria and on The Basilica Mosaics:

Skolnick Architecture + Design Partnership
Every project tells a story. SKOLNICK finds each project’s compelling narrative and interprets it though the language of design to enrich its clients’ lives and communities. Their philosophy, Design as Interpretation, is at the heart of their work. As a multi-disciplinary studio with expertise in architectural, exhibition, and communication design, the practice takes a holistic approach to creating places that express the inherent essence of each project and embody the values, beliefs, and attitudes of their clients.

Founded in 1980, SKOLNICK Architecture + Design Partnership has been at the nexus of contemporary thinking about how people live, and how people create play, home, and work environments that speak to their communities’ creative, functional, and aspirational needs. The firm’s broad and very diverse portfolio includes projects ranging from intimate spaces to international destinations.