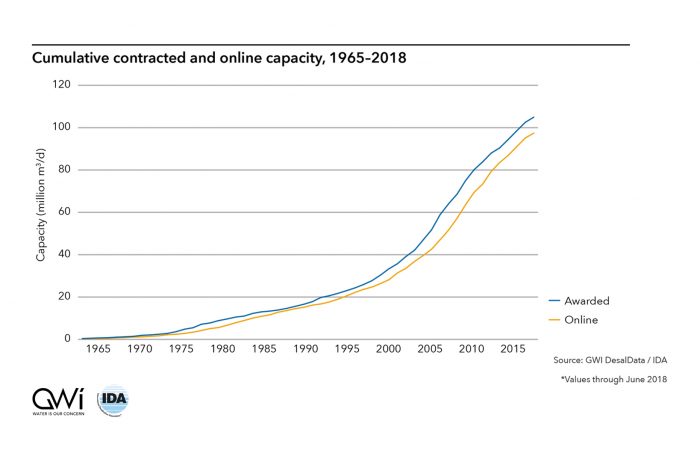 BOSTON and OXFORD – With the introduction of the new IDA Water Security Handbook, the International Desalination Association (IDA) and Global Water Intelligence (GWI) have released the latest market overview for the worldwide desalination, water reuse, and smart leakage reduction markets.

The handbook reports that after three years when the overall desalination market remained steady, experts project that 2019 will see the most active growth in seawater desalination, since the late 2000s.

“IDA has always advocated solutions to water scarcity by supporting the development of the desalination and water reuse industry to secure sustainable water and natural resources. Over the past decades, our industry has achieved an important reduction in non-conventional water costs and increased quality to ensure water sustainability,” stated Miguel Angel Sanz, IDA President.

“As climate change continues to impact our world, along with industrial and population growth, the demand for clean water increases. Desalination and water reuse: non-conventional, environmentally sound water supply solutions are in keeping with the circular water economy and offer solutions to water scarcity. The trends we are seeing point to a broad recognition that these advanced water treatment solutions are essential to the health and well-being of people and economies around the world, both now and in the future,” said Shannon McCarthy, IDA Secretary General.

“The big breakthrough in the past year has been on the cost of desalination,” commented Christopher Gasson, Publisher at GWI. “Recent project tenders in Saudi Arabia and Abu Dhabi have seen the price fall below $0.50/m3 for the first time. After a decade in which price drifted upwards as a result of high materials costs and higher energy costs, this is very good news. Indeed, we expect 2019 to be the best year ever in the desalination market. In terms of water reuse, prices for indirect potable standard water are in the $0.30-$0.40 range, but the market is still held back by public perceptions.”

The expected surge in desalination is largely a result of gathering momentum in construction plans in the Middle East, especially the GCC countries. According to the 2018-2019 IDA Water Security Handbook, 1.9 million cubic meters per day (m3/day) of seawater capacity was contracted in the first half of 2018, up 26% over the same period in 2017. Since that time, preferred bidders have emerged on projects totaling well over 1 million m3/d in additional new capacity in the region.

However, not all the contracted large seawater plants are located in the Middle East. The largest seawater desalination award listed in the 31st desalination inventory is the 378,000 m3/d seawater reverse osmosis (SWRO) project in Rosarito, Mexico. This was followed by projects at Hamriyah (Sharjah, UAE, 272,760 m3/d), Shoaiba 3 expansion 2 IWP (Saudi Arabia, 250,000 m3/d) and Al Khobar (Saudi Arabia, 210,000 m3/d).

Desalination of lower-concentration feedwater, such as wastewater and low-concentration surface water, also increased, comprising almost 25% of total capacity in 2017 compared to approximately 15% in 2016. The majority of this capacity is made up of large wastewater treatment plants in China and India.

The handbook also reports that the industrial desalination market grew by 21% in contracted capacity between 2016 – 2017. Increased activity in upstream and downstream oil & gas accounted for over one third of contracted industrial capacity in 2017, while rising commodity prices have revived desalination activity in the mining industry, with 201,000 m3/d of new capacity contracted in the first half of 2018 alone. Rapid growth in the microelectronics industry is also creating opportunities for desalination technologies, with contracted capacity in this sector more than doubling from 2016-2017.

From a geographic perspective, contracted capacity in the Middle East – the largest market for desalination – fell from 2016 to 2017, but was offset in 2018 by the awarding of several large projects in Saudi Arabia and Bahrain, and the awarding by the Dubai Electricity and Water Authority (DEWA) of a 181,840 m3/d SWRO expansion at its Jebel Ali power and desalination complex, and a 272,360 m3/d SWRO expansion of Federal Electricity and Water Authority’s (FEWA) Hamriyah desalination plant in Sharjah.

The Asia-Pacific desalination market grew in 2017, for the most part due to the Chinese desalination market where contracted capacity reached its highest level since 2010. In the Americas, 2018 was the most active year for desalination since 2013. In sub-Saharan Africa, Kenya’s Mombasa County awarded two projects of 100,000 m3/d and 30,000 m3/d, while three smaller projects were awarded in Cape Town to help avert ‘Day Zero’ when expected water reserves were projected to run out.

The importance of water reuse as a solution to the world’s growing water issues has escalated significantly in the past few years. Increasingly, many regions are looking to wastewater reuse over large-scale desalination as a solution to drought-induced water scarcity. For example, both Cape Town and California are pursuing potable water reuse of wastewater, and reuse of wastewater in industry plays a vital part of policy responses to degradation of water resources in China and India.

As contracted capacity continues to rise, the epicenter of the global wastewater reuse market has shifted from North America and Asia, with China accounting for 49% of capacity contracted between 2010 and 2017. However, new capacity in India and Taiwan is also significant. India is now the fastest growing market in the region with new environmental legislation one of the drivers.

The Americas is the second largest region according to installed capacity, with the majority of water reuse focused on the agricultural and industrial sectors in the USA, which remains the world’s second largest market by contracted capacity at 10% of the total. However, the awarding of three projects in Latin America accounts for the majority of the region’s increase in contracted capacity: the 2 million m3/d Atotonilco wastewater treatment plant in Mexico and two primary treatment plants totaling 1.75 million m3/d in Peru.

Water reuse is gaining traction in the Middle East as well, although desalination remains the primary unconventional water source for arid countries in the region. Large-scale upgrades of sewage treatment plants in the Gulf and Egypt have driven strong growth in reuse.

Spain has led the European wastewater reuse market since 2010, with large projects aimed at agricultural users in that country. However, a proposed EU directive that would require treatment of microbiological pathogens to facilitate water reuse for agricultural irrigation has the potential to increase water reuse in the EU from 3 million m3/d to 18 million m3/d.

Industrial water demand is a key driver of the wastewater reuse market. This is especially true in water-intensive manufacturing and extraction industries and in regions where population growth has created a conflict between industrial and municipal water users, and has driven industry to seek alternative water sources as municipal users are typically prioritized, especially in times of drought.

The Handbook also details how the uptake of smart water solutions to combat leakages in utility water networks is growing rapidly, with the digital transformation becoming has a key focus for many utilities. Recent years have seen large-scale smart metering projects becoming increasingly commonplace outside their core markets of Western Europe and North America. In 2018 Saudi Arabia’s National Water Company (NWC) announced that almost 900,000 of the 2.1 million smart water meters it intends to install by 2020 were already in place.

Similarly, the use of sensors and software to monitor underground assets is set to grow rapidly, as an increasing number of successful pilot schemes from across the globe lead to larger-scale implementation. Although the uptake of these technologies has been slow compared to smart metering, regulator-specified non-revenue water reduction targets are driving adoption in Western Europe, while water-scarce countries in the Middle East – particularly Israel, Saudi Arabia, and the UAE – have implemented a number of promising pilot network monitoring projects.

About the IDA Handbook

Building on the IDA Desalination Yearbook’s market analysis and reference directory, the IDA Water Security Handbook (http://globalwatersecurity.org/) is a new customer-facing publication published by GWI that gives end-users dealing with water scarcity the information they need to future-proof their operations for 2050 and beyond. Copies of the 2018-2019 IDA Water Security Handbook are available free to IDA members or can be purchased directly from IDA or Global Water Intelligence. For more details about IDA membership, or to purchase copies of the IDA Handbook, contact IDA at membership@idadesal.org.

Copies may also be purchased by emailing Naftali Rumpaisum at nrumpaisum@globalwaterintel.com or you can download a free preview version of the IDA Handbook here

The International Desalination Association (www.idadesal.org) was established 45 years ago and is a non-profit association that serves members and stakeholders in more than 60 countries.  Its membership comprises scientists, end-users, engineers, consultants and researchers from governments, corporations and academia. IDA is associated with the United Nations as part of a growing international network of non-governmental organizations (NGOs).  IDA has recently established its foundation, the IDA Sustainable Water Resources Foundation aimed to support education and knowledge sharing, (www.idaswrf.org).