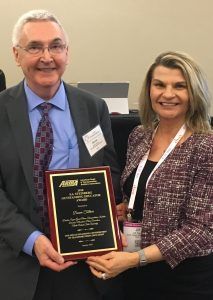 Named after the founding president of RED, the award recognizes “an individual who has made remarkable contributions to transportation education.”

Prior to joining North Dakota State, Tolliver was a rail planner for the North Dakota Department of Transportation and a research assistant at the Center for Environmental Studies at Virginia Polytechnic Institute. He holds a Ph.D. in Environmental Design and Planning and a master’s degree in Urban and Regional Planning from Virginia Polytechnic Institute & State University, as well as a bachelor’s degree in Geography from Morehead State University.