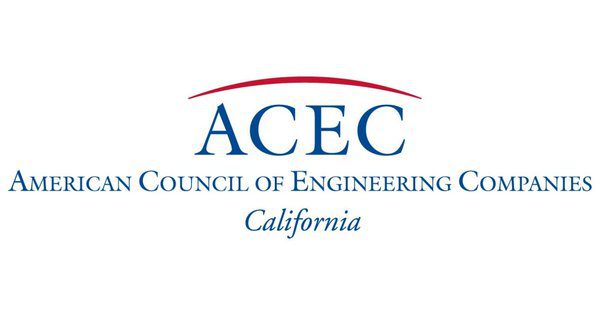 “Engineering and land surveying provide the innovative backbone of many critical infrastructure projects in California,” said Brad Diede, Executive Director of ACEC California. “This year’s recipients represent outstanding achievement in seismic safety projects, sustainable transportation projects and recycled water programs, among many others. Our engineering and land surveying firms and their local agency and private sector partners continue to harness cutting-edge technologies so that projects are more sustainable and more effective at serving the people of California.”

The winner of the Golden State Award, an honor bestowed on the best overall project, will be announced at the Engineering Excellence Awards dinner February 7, 2019. The awards dinner is also a fundraiser for the ACEC California Scholarship Foundation 501(c)3, which provides scholarship awards to graduate and undergraduate students that are recognized for their notable and outstanding academic achievements. Honor Award winners also are eligible to enter the national level Engineering Excellence Awards competition and will have photographic panels on display at the Capitol, outside of the Governor’s office, in early 2019.

Photographs of award-winning projects can be found here.

BKF Engineers in Redwood City, CA, for its work on the San Pablo Avenue Bike and Pedestrian Improvements in Albany, CA.

Carollo Engineers, Inc. in Fresno, CA, for its work on the City of Fresno Southeast Surface Water Treatment Facility in Fresno, CA.

Carollo Engineers, Inc. in Sacramento, CA, for its work on the City of Woodland Aquifer Storage and Recovery Wells #29 and #30 in Woodland, CA.

KOA Corporation in Orange, CA, for its work on the Daisy-Myrtle Bike Boulevard in Long Beach, CA.

Woodard & Curran in Walnut Creek, CA, for its work on the North Valley Regional Recycled Water Program in Modesto and Turlock, CA.

HNTB Corporation in Oakland, CA, for its work on the Fairfield-Vacaville Train Station in Fairfield, CA.

Kimley-Horn and Associates, Inc. in Sacramento, CA, for its work on the Johnny Cash Trail Phase 2 in Folsom, CA.

KOA Corporation in Orange, CA, for its work on the Grand Avenue Bike Lanes and Multipurpose Trail in Wildomar, CA.

LCC Engineering & Surveying, Inc. in Martinez, CA, for its work on the BART Downtown Access Ramp & Lighting, Project No. 4096 in Orinda, CA.

Michael Baker International, Inc. in Ontario, CA, for its work on the Interstate 10 (I-10) / Jefferson Street Interchange Improvements in Indio, CA.

Provost & Pritchard Consulting Group in Fresno, CA, for its work on the Biogas Pipeline Project in Tulare County, CA.

Provost & Pritchard Consulting Group in Fresno, CA, for its work on the Fulton Street Reconstruction Project in Fresno, CA.

SHN in Eureka, CA, for its work on the Design, Renovation, and Reconstruction of Wet Utility and Roads Infrastructure in Scotia, CA.

AECOM in San Jose, CA, for its work on the SFO Runway 10R-28L Overlay and Reconstruction and Taxiways F2 and S Project in San Francisco, CA.

BKF Engineers in Redwood City, CA, for its work on the San Jose Large Trash Capture in San Jose, CA.

Infrastructure Engineering Corporation in Poway, CA, for its work on the North Bay Pump Station Project in Lake Arrowhead, CA.

Kennedy/Jenks Consultants in San Diego, CA, for its work on the Land Outfall Replacement Project in Cardiff, CA.

Kimley-Horn and Associates, Inc. in Pleasanton, CA, for its work on the Hotel Nia @Menlo Gateway in Menlo Park, CA.

SA Associates in Arcadia, CA, for its work on the New Nitrate Removal Treatment Facility and Reactivation of Well No. 2 in Glendale, CA.

SANDIS Civil Engineers Surveyors Planners in Campbell, CA, for its work on the Ronald McDonald House at Stanford in Palo Alto, CA.

T.Y. Lin International in San Diego, CA, for its work on the State Route 178 Widening Project in Bakersfield, CA.

ACEC California is a statewide association representing over 1,000 private consulting engineering and land-surveying firms that average 20 employees each. ACEC California is dedicated to enhancing the consulting engineering and land surveying professions, protecting the general public and promoting the use of the private sector in the growth and development of our state. Our members provide services for all phases of planning, designing and constructing projects. For more information, visit www.acec-ca.org.