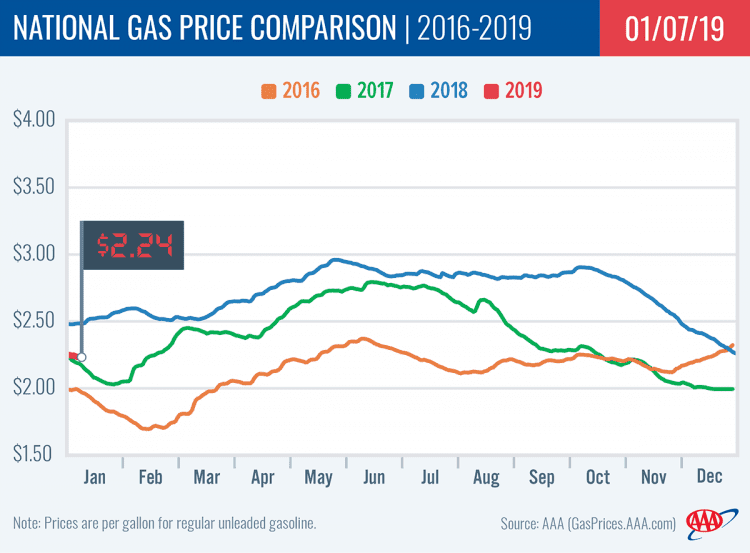 DENVER  – The latest Energy Information Administration (EIA) data register gasoline demand at 8.6 million barrels per day for the week ending December 28 – the lowest level on record since February 2017. Overall demand was down nearly 900,000 barrels despite a record holiday travel period. That suggests that winter demand could be lower than expected, further driving down already-foundering pump prices for the time being.

Colorado motorists can expect to pay a statewide average of $2.17 per gallon, down seven cents on the week, 32 cents on the month, and 24 cents on the year. Denver enjoys the state’s cheapest average, at $2.06. Vail, meanwhile, drives the state’s average up with the most expensive per-gallon pump price at $2.69.

“As the global crude market continues to be oversupplied, oil prices are dropping, continuing last week’s trend,” said AAA spokesman Skyler McKinley. “This is great news for motorists filling up at the pump.”

At the close of Wednesday’s formal trading session on the NYMEX, WTI rallied $2.37 (4.76%) to settle at $52.16. Oil prices were volatile last week, as market observers continue to believe that the global crude market is oversupplied. Moreover, analysts are also wary of the impact a potential economic slowdown in 2019 could have on global crude oil demand. In the coming weeks, market observers will look for indications that OPEC’s global pact with large non-OPEC crude producers (including Russia) will reduce crude production by 1.2 million barrels a day for at least the first six months of 2019, which may help reduce the growing global glut of crude. In turn, this could drive up crude oil prices and, subsequently, gas prices.

In related news, EIA’s latest weekly petroleum status report revealed that total domestic crude inventories held steady for the second week at 441.4 million barrels. Domestic crude production also held steady for a second week at a record high of 11.7 million barrels a day. Steady inventories amid high production underscore how oversupplied the market currently is, while demand for gasoline remains at a two-year low. Additionally, Baker Hughes, Inc. reported that the U.S. lost eight oil rigs last week, bringing the current total of active oil rigs to 877. When compared to the total number of active rigs at this time last year, there are 135 more rigs this year.

Colorado Gas by the Numbers

More than 685,000 members strong, AAA Colorado is the state’s most-trusted advocate for the safety and security of all travelers. As North America’s largest motoring and leisure travel organization, AAA provides more than 58 million members with travel, insurance, financial, and automotive-related services – as well as member-exclusive savings. For more information, visit AAA.com