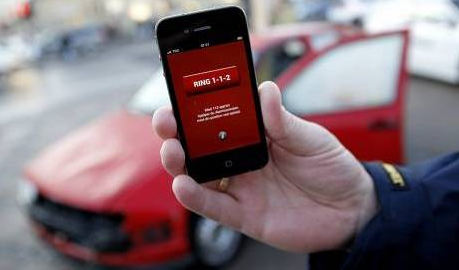 If you’ve ever tried calling 9-1-1 from a location you weren’t familiar with, you know how difficult it can be to explain your exact position to the dispatch officer. In a critical situation, your exact position is valuable information which can mean the difference between life and death, as every second counts when ambulance, police, or fire trucks are on the way to help you.

In Denmark, Intergraph has released a new app – available on iPhone, Android, and Windows phones – to ensure the emergency dispatch center receives the exact position of the caller. When calling the Danish emergency number 1-1-2 through the app, the smartphone automatically sends the GPS coordinates to the dispatch center. The dispatch officer will be able to immediately dispatch the vehicles to the correct location.

Intergraph developed the app in collaboration with the Danish National Police, the Copenhagen Fire Department, and the Danish Geodata Agency. The goal was to keep the app as simple as possible, while also taking into consideration several technical factors.

One consideration was the power consumption of the GPS receiver. When the GPS receiver is activated, the smartphone battery is quickly drained. And even though the GPS coordinates are crucial, the verbal communication between the caller and the dispatch officer is still the most important part of an emergency call. Therefore, Intergraph designed the app to deactivate the GPS receiver when the phone battery is at less than 25 percent.

Denmark launched the 1-1-2 app in one of the busiest places in the nation’s capital, Copenhagen, during the morning rush hour. To create attention, the street corner was turned into a car crash incident scene. Among the participants were the Danish Minister for the Environment, who is responsible for the Geodata Agency, as well as representatives from the Danish National Police and the Copenhagen Fire Department.

Only a few days after the announcement, local news media reported about a life that was saved because someone called 1-1-2 through the app. Because this person’s position was hard to determine, the GPS coordinates were crucial and helped the rescue team save time, ultimately saving his life.

The app has been downloaded more than 200,000 times during the first 15 days since its launch, which makes it the most downloaded app ever in Denmark.